Home 5G mobile phone 5G vs 4G: what is the real difference between them? 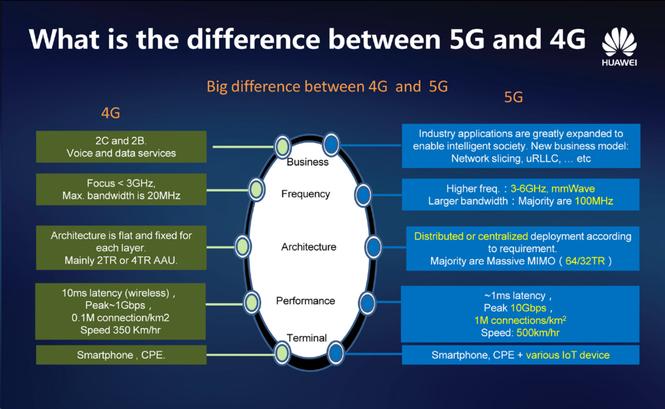 5G vs 4G: what is the real difference between them?

At last, despite delays and hiccups marring the roll out in both the US and parts of Europe, 5G has finally arrived. South Korea, the US and China are leading the charge with around 80 – 90% population coverage. Europe is trailing behind, but outlier Switzerland has also reached 90%.

Though challenges persist for deployment globally, mobile network operators and technology providers are optimistic as ever for the future of 5G. The 2021 Ericsson Mobility Report predicts 5G will account for nearly half of all mobile subscriptions by 2027, when they are expected to reach 4.4 billion. This is up from an estimated 660m last year. Global 4G population coverage was over 80% at the end of 2020.

However, with many of the game-changing applications 5G vendors have promised yet to materialise on any meaningful scale, opinion remains divided on the networks’ disruptive potential, compared to 4G. Many experts predict the pandemic will be a catalyst for increased digital adoption, including game-changing 5G applications. While others remain steadfastly sceptical about its revelatory benefits.

How does 5G work?

5G is a new digital system for transforming bytes - data units - over air. It uses a 5G New Radio interface, along with other new technologies, that utilises much higher radio frequencies (28 ghz compared to 700 mhz - 2500 mhz for 4G) to transfer exponentially more data over the air for faster speeds, reduced congestion and lower latency, which is the delay before a transfer of data begins following an instruction.

This new interface, which uses millimetre wave spectrum, enables more devices to be used within the same geographic area; 4G can support about 4,000 devices per square kilometre, whereas 5G will support around one million. This means more Netflix streaming, voice calls and You Tube carried, without interruption, over the limited air space.

5G also uses a new digital technology called Massive MIMO, which stands for multiple input multiple output, that uses multiple targeted beams to spotlight and follow users around a cell site, improving coverage, speed and capacity. Current network technologies operate like floodlights, illuminating an area but with lots of wastage of the light/signal. Part of the roll-out of 5G involves installing Massive MIMO and 5G New Radio to all mobile network base stations on top of the existing 4G infrastructure.

“4G is reaching the technical limits of how much data it can quickly transfer across blocks of spectrum,” explains Chris Mills head of industry analysis, at Tutela. “A major difference between 5G and 4G is this congestion will be eliminated.” This mean no more five bars of networking signal at rush hour but an inability to access a web browser.

But arguably, 5G’s biggest differentiator to 4G will be as a gateway for the Internet of Things-connected world at scale. Later iterations of 5G networking are expected to be revolutionary for data-driven industries, smart cities and infrastructure management because it will be possible to have many more devices working, reliably, securely and uninterrupted in the same area. Overall, due to the new technologies, spectrum and frequencies it uses, 5G has several benefits over 4G; higher speeds, less latency, capacity for a larger number of connected devices, less interference and better efficiency.

How does 5G work in terms of bandwidth, latency and spectrum?

Each operator owns blocks of spectrum which is a range of electromagnetic radio frequencies used to transmit sound, data, and video across a country. This spectrum is added together to create their total network capacity which determines how fast they can transfer data.

“Today an operator might have 100 mhz of entire spectrum to use for all of its UK customers, but eventually with 5G this will increase to around 1,000 mhz - that is the real change with 5G,” explains Mr Mills.

This will also create much less latency in the system meaning data will be transferred in real time.

Latency for 4G is around 20-30 milliseconds, but for 5G it will reach well below 10 milliseconds, and in best cases around 1 millisecond delays, according to Mats Norin, program manager at 5G For Industries, Ericsson Research.

“For consumers this is not as important but will make things seem faster, however, for industry - for long distance, remotely-controlled heavy machinery, for example - it will be critical,” he says.

So how fast will 5G really be?

According to Vodafone, 5G promises device speeds around 10 times faster than 4G, meaning high-quality, ultra-high resolution 4K video calls - the standard used for commercial digital cinema - downloads will be delivered even quicker to smartphones and tablets. Data transfer of less than 20 milliseconds will be standard. 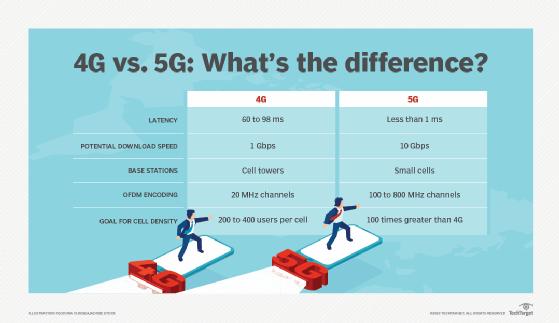 Mr Mills warns, however, that much of what is published about the speed of 5G is hype - especially for consumers.

“Gigabytes speeds are useful for a handful of applications, such as live streaming an 8k VR headset over a 5G network, however, for the average user, there is not much need for that kind of speed on a mobile device,” he says, “Live streaming or downloading HD video is very achievable using a 4G network.”

“People could use a 5G WIFI router instead of paying for in-home broadband - this will suit renters who don’t necessarily want contracts tied to a property,” he says. Verizon and AT&T are already investing in trials in the US.

What will 5G enable businesses and industry to do?

The majority of 5G-supported or enabled applications in play today are consumer-based. These include mobile streaming, augmented reality (AR), virtual reality (VR), gaming, as well as increased capacity on the public network.

It is 5G for enterprises that is expected to be the money maker, however. In its 5G value report, KPMG estimated the business-to-business case for 5G to be US$4.3 trillion ‘of upside’ identified.

The low-latency, increased bandwidth and higher speeds of fifth generation networking can be exploited for applications that experts say would be less efficient and more challenging with 4G or WIFI. These include factory automation, large-scale video surveillance, haptic applications, including remote surgery, and connected smart cities such as autonomous vehicles and more.

Some innovative examples are starting to emerge. A recent trial in the West Midlands allowed patients to carry out a colon capsule endoscopy at home by swallowing a pill-sized camera. The real-time transmission to the hospital of the images captured was facilitated by 5G.

In Sweden, the Boliden Aitik mine operates 5G-enabled automation for drilling and blasting which has reduced costs by 1%, saving €2.5 million annually.

A Ford factory in Valencia, in collaboration with Ericsson, is trialling smart autonomous automated guided vehicles based on human gesture recognition and VR applications to improve production line efficiency.

The Ford project makes use of Edge computing, which in combination with 5G is piquing the interest of enterprises, says Fred Huet, partner at telecommunications consultancy Altman Solon. Edge computing brings data storage closer to where it is generated, as opposed to a central database, allowing for greater throughput of data to manage high output of images and video streams for use in-conjunction with AI processing.

“5G and Edge are providing good solutions for non-stop video surveillance, which can improve efficiency and work safety, but which generates a lot of data that cannot easily be moved from where it is generated, or which needs to be stored close to a facility for fast AI processing.” explains Huet. “This is particularly beneficial to hospitals outside London that are not close enough to Cloud providers.”

While most experts see 5G as an enabler for innovation today. Even where 5G has been rolled-out, investment in its applications is still nascent. Professor William Webb, IEEE fellow and CEO of Webb Search Ltd, points out a UK Ofcom report found just seven deployments of mobile systems in vertical industries, such as manufacturing and healthcare. Globally, the picture isn’t much different.

“They haven’t yet demonstrated the standalone business case for when governments and others step back – I think the jury’s still out on whether they will or won’t emerge”.

Bjorn Odenhammar, head of networks and managed services at Ericsson UK & Ireland, believes this will change when standalone 5G networking, which provides the lowest latency and networking slicing for uninterrupted connectivity to critical applications, is more widespread.

“This will provide absolute certainty, reliability and control that WiFi can’t guarantee,” he explains.

How secure is 5G?

Many of these use cases could benefit from network slicing - splitting of the network to tailor speed, capacity, coverage, encryption and security - which can be achieved much more easily with 5G.

“Slicing offers manufacturers and others a dedicated network with which they can fully control and support their IoT solutions for reliable communications, with guaranteed quality of service and Cloud or Edge-based computation,” says Dritan Kaleshi, head of Technology, 5G at Digital Catapult.

This can provide an additional element of security not afforded by WIFI, which is shared with others on the spectrum and is therefore more easily interfered with, and less easily achieved with 4G.

“If a company has particularly sensitive data governed by regulation requirements it can be sent over fundamentally different chunks of network to safeguard privacy, slicing can enable that for 5G very seamlessly,” says Mr Mills.

When will 5G arrive?

5G has arrived, for many, if not everyone. EE, O2, Three and Vodafone first started rolling out the UK network in 2019 and Ofcom estimates it is now available from at least one mobile network operator outside 42-57% of premises. Whereas 4G reaches 99%.

The non-standalone network which is supported by the 4G Core Network and is essentially a combination of both is being deployed first. Moving from this to the 5G Core Network requires a software update, says Odenhammar. He expects this to start happening sometime this year. Only a few, such as T-Mobile in the US, have launched standalone services commercially. Private networks, which are typically being used by organisations or at test beds, are also being deployed.

There are still areas of the UK that don’t have fibre or 4G coverage, however, and it’s unclear how 5G will be rolled out in these areas which are typically not commercially viable for mobile network operators. There could be a role for 5G fixed wireless access, which is a medium of network access using New Radio in the millimetre wavelength that provides internet access through a router, in servicing these areas, says Odenhammar.

Globally, the roll out of 5G has been problematic. The pandemic postponed some spectrum licensing in Europe. Switzerland’s Swisscom has faced local opposition. Delays occurred in the UK after the government decided to replace Chinese made Huawei hardware and most recently AT&T and Verizon were forced to halt deployment near US airports because the Federal Aviation Administration warned of signal interference. Fortunately, this is not expected to be an issue in Europe because there is a big enough gap between frequency bands used by aviation and 5G.

In fact, in the UK and across Europe there is little holding back the roll-out now, beside perhaps cost, says Webb.

“Mobile operators aren’t making much money from 5G now, if they were they could deploy very quickly and widely, there’s not much stopping them doing that apart from the economics. The picture, however, is different depending on the country as there are other drivers, such as government pressure,” he explains. “What we need now are several pioneering businesses to show how 5G is really making a difference to them, so others will follow.”