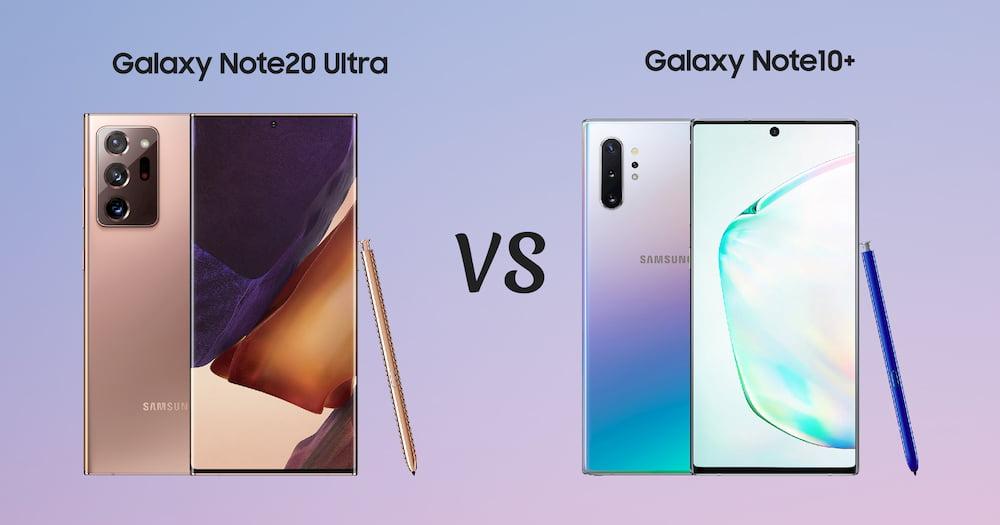 The Galaxy Note series has always followed a "Go big or go home" philosophy, and that's very much on display with the Samsung Galaxy Note 20 Ultra. The new Note has one of the largest screens you'll ever find on any phone — at least on one that doesn't fold open — along with the most powerful processor available to an Android device. You'll also get multiple cameras and an upgraded S Pen with less latency than ever before.

In fact, the Note 20 Ultra introduces so many changes, you might wonder if it's a completely different device from the Galaxy Note 10 Plus that used to be Samsung's best big phone. While the new model still has a lot in common with last year's super-sized phone, much has changed since the Note 10 Plus made its debut a year ago.

Flip over the phones, and you'll see a big design difference. The Note 10 Plus camera array is pretty minimal, with its lenses descending down the left side of the phone. For the Note 20 Ultra, Samsung went with a more prominent square array that's hard to look away from. It's the one area where the Note 20 Ultra might be a step back from its predecessor.

You'll also have less dynamic color options with the new phone, as the Aura Glow option on the Note 10 Plus was a real eye-catcher. The Note 20 Ultra's Mystic Bronze, Mystic Black and Mystic White options are not nearly as mystical as their names might have you believe.

Still, the Note 20 Ultra looks a bit more sophisticated overall, thanks to its squared-off edges and the way the gleaming, mirrored metallic frame plays off against the matte back. It's also more durable, as the first phone to incorporate Corning's Gorilla Glass Victus technology, which the glass manufacturer says is two-times more resistant to scratches than the Gorilla Glass 6 incorporated on the Note 10 Plus.

Once again, the Note 20 Ultra is rated IP68 water resistant, just like many Samsung flagships before it, including its predecessor. That translates to 1.5 meters of submersion for a maximum of 30 minutes.

The AMOLED panel on the Galaxy Note 20 Ultra is slightly larger than the one on the Note 10 Plus, with a 6.9-inch screen replacing the 6.8-inch display on last year's phone. But that's not the real story here.

Instead, the most noteworthy thing about the Galaxy Note 20 Ultra is its use of a dynamic 120Hz refresh rate. That means the Note 20 Ultra can adjust how quickly it refreshes depending on what you're using the phone to do. If you're scrolling or playing a compatible game, the Note 20 Ultra will max out the refresh rate; when you're engaged in more static activities, that refresh rate will scale all the way down to 10Hz if you're looking at still images.

The Note 10 Plus just doesn't compare to that feature, as it's got a 60Hz refresh rate — typical of most smartphones, really. That said, HDR10+ support and Quad HD+ resolution means that the Note 10 Plus' display is still sharp and colorful, even if it's not as immersive as what the Galaxy Note 20 Ultra offers.

The Note 20 Ultra's panel is more physically responsive as well, because it reacts to S Pen actions with just 9ms latency, compared to 40ms latency on the previous generation Note.

Responsiveness is, indeed, the main advantage of the Note 20's screen technology; in all other metrics these devices compare quite favorably where their displays are concerned. They get about equally bright (662 nits for the Note 20 Ultra versus 686 nits on the Note 10 Plus) and can render a similar gamut of colors (124% of the sRGB space in Natural mode for the Note 20 Ultra, versus 125% on the Note 10 Plus). Gamers and artists, however, will certainly gravitate toward the newer model for its far smoother animations.

Samsung shuffled up the cameras it used on its different Galaxy Notes, scrapping a time-of-flight sensor on this year's model but opting for more megapixels and a more powerful zoom. The results yield sharper photos with the Galaxy Note 20 Ultra, particularly when you're zooming in on a subject. 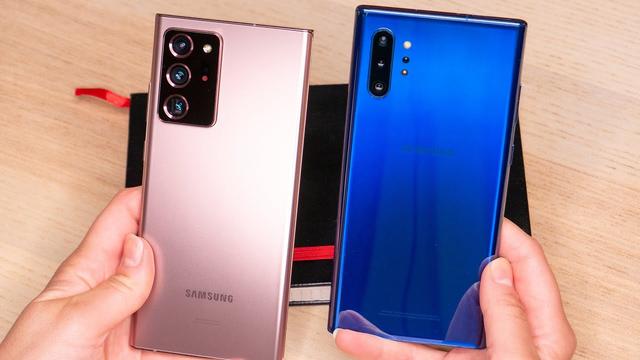 Specifically, the Galaxy Note 20 Ultra adopts the 108-megapixel main camera that Samsung first introduced with the Galaxy S20 Ultra. To help alleviate some of the focus issues users experienced with that earlier phone, Samsung added a laser autofocus sensor, which replaces the time-of-flight sensor found on last year's Note 10 Plus. The main camera on that older Galaxy Note topped out at 12MP.

Up front, there's no change in selfie cams with both Galaxy Note models turning to 10MP shooters with apertures of f/2.2.

The result is one of the best camera phones you can buy today. The above gallery of shots, all captured with the Note 20 Ultra, illustrate the incredible detail and versatility possible with such an intricate array of sensors. Samsung's Live Focus mode has also been greatly enhanced with its latest-generation imaging hardware and software, finally delivering shallow depth-of-field portraits on a par with that from the latest iPhones and Pixels. What's more, the addition of 5x optical zoom with 10x lossless power certainly makes the Note 20 Ultra infinitely more useful than its predecessor when working from a distance.

However, the Note 10 Plus actually comes with more on-board storage in its base model — 256GB to the Note 20 Ultra's 128GB — with both phones also offering a 512GB option and microSD card slots to expand storage even further. Samsung packed both phones with 12GB of RAM.

By default, the Galaxy Note 20 Ultra comes with 5G connectivity, thanks to Qualcomm's X55 modem, which is capable of working on all types of 5G networks. To get 5G with a Note 10 phone, you would have had to buy the $1,299 Note 10 Plus 5G.

A bigger screen requires a bigger battery, and that's what Samsung has gone with for the Galaxy Note 20 Ultra. The new phone features a 4,500 mAh power pack, a bump up from the 4,300 mAh battery inside the Note 10 Plus. That battery helped last year's Samsung phone hold out for 10 hours and 47 minutes on our battery test, which involves continuous web surfing over LTE until a phone runs out of power. That result is better than the average smartphone, though the Note 10 Plus fell short of landing on our list of thebest phone battery life, where you need to go at least 11 hours before you need a charge.

Does Note 20 Ultra outperform its predecessor? Not quite, though it doesn't lose by much, with a runtime of 10 hours and 26 minutes in our test while the phone's display was capped at 60Hz. That dropped to 7 hours and 59 minutes at full 120Hz mode.

It's unclear exactly why the Note 20 Ultra's longevity pales in comparison to the Note 10 Plus,' despite having a larger battery. The addition of 5G connectivity could hamper efficiency, though it's hard to pin down on one cause.

Galaxy Note 20 Ultra vs. Galaxy Note 10 Plus S Pen and other features

The biggest change you'll notice is in the performance of the S Pen, as the Note 20 Ultra version features a reduced latency of 9ms — making for a much more responsive stylus than before. The Note 20 Ultra also features an updated Note app with live syncing and the ability to match written notes with voice recordings.

The Note 20 Ultra ships with Android 10 and Samsung's One UI 2.0 interface. The Note 10 Plus has upgraded to Android 10 after initially shipping with Android 9. We wouldn't expect an Android 11 update to be available for either phone until the end of 2020.

You'd expect a phone that's a year newer to be at least a year better than its predecessor. After evaluating the Galaxy Note 20 Ultra, it's clear to see Samsung's new premium phablet easily surpasses the Note 10 Plus in a number of critical ways, and is worth the added expense if you're choosing between picking up the new model or saving a few hundred on last year's edition.

The cameras on the Note 20 Ultra are more powerful, with massively-improved sensors and more versatile zoom for the telephoto. The souped-up Snapdragon 865 Plus silicon handles demanding games and apps effortlessly, and DeX Mode is easier than ever to use, thanks to wireless support via Miracast. And, of course, the better performance and responsiveness of the S Pen is sure to please the Note faithful.

However, the real difference-maker is the faster refreshing display on the Galaxy Note 20 Ultra, which makes for an experience that is not only visually dazzling, but makes navigating the phone feel so much snappier in general and especially comes in handy while gaming.

The Galaxy Note 10 Plus is still a powerful phone, and unless you plan on taking advantage of a generous trade-in offer to mitigate the cost of upgrading, it would be hard to justify spending $1,299 on a new phone when your old Note still performs well. Still, if you want 5G connectivity, better overall performance and — most significantly — that more immersive display, the Galaxy Note 20 Ultra is the Samsung phablet to get.