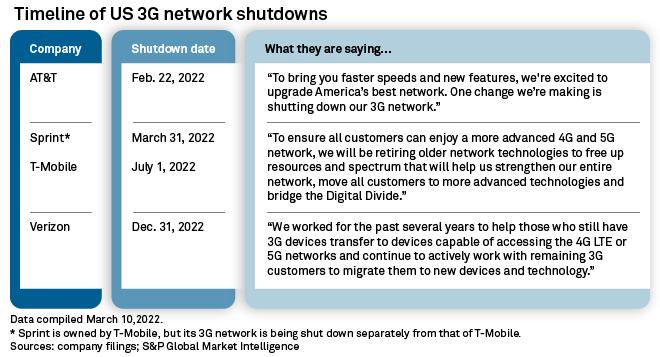 U.S. wireless carriers have started shutting down their 3G networks as they expand their 4G and 5G offerings. Carriers say the change is long overdue, while other players say it is causing headaches for consumers, alarm services and 911 operators.

As 3G is phased out, some cell phones and connected devices will be unable to make or receive calls and texts, use data or contact emergency services. While 3G mobile phones have largely been discontinued by the larger carriers, some are still in use, especially among customers of mobile virtual network operators. Additionally, some older home security, medical monitoring and car services rely on 3G services.

"Having better, faster wireless service across this country is an important goal, but as we develop and deploy new technologies, we must always strive to do so in a safe and inclusive way," said Nicholas Garcia, policy counsel at Public Knowledge, a public interest group focused on internet accessibility.

Jeff Moore, principal of Wave7 Research, a wireless research company, said AT&T's shutdown is causing significant issues for its mobile virtual network operators, also known as MVNOs. MVNOs are wireless providers that do not own the wireless network infrastructure over which they provide services.

As of March 10, 2022, Consumer Cellular, a top AT&T MVNO, had a notice posted on its website acknowledging customer connectivity concerns. The company stated it is experiencing a high volume of calls because of the shutdown.

"Due to nationwide decommissioning of 3G wireless networks by all carriers, some devices are experiencing connectivity issues," the notice reads.

Moore said that most disruptions, however, will be experienced by connected car and device users, not voice customers, as most voice customers have already been upgraded from 3G phones. While some 3G connected devices will maintain their utility after 3G discontinuation, many will need hardware and software changes to continue their functionality.

"The percentage of voice customers impacted is tiny and deals have been generous to get them to upgrade to 4G and 5G," explained Moore.

The internet of things, which refers to the system connecting consumer products to the internet, is expected to lose contact with certain devices as 3G networks shutter.

Device makers will blame networks when faced with consumer backlash and the possibility of having to spend more money to upgrade their customers, said Lynnette Luna, an analyst with Kagan, a media research group within S&P Global Market Intelligence.

"I understand that components shortages have hurt the transition to newer technologies, but IoT companies have known about this for some time and it’s really hard to put the blame on carriers when they see very little data traffic coming on 3G and huge surges on their 4G and 5G networks," Luna said. "They need that spectrum." 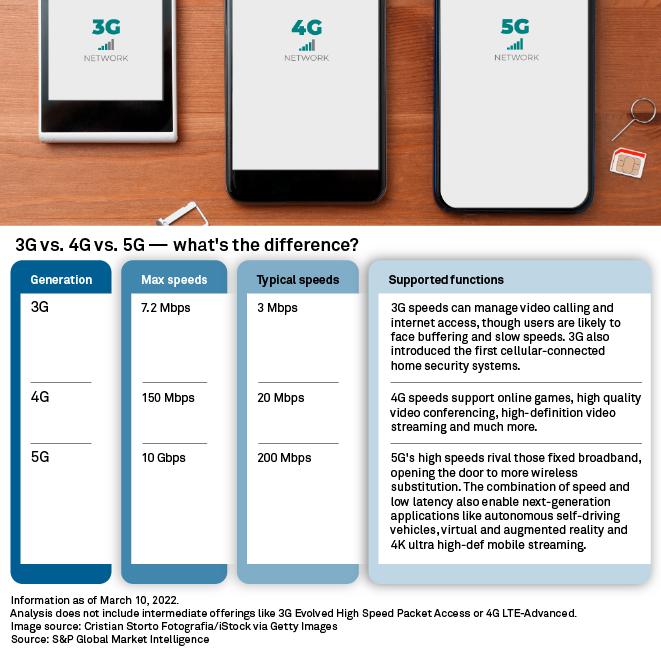 AT&T, Verizon and T-Mobile did not respond to requests for comment.

Although all of the wireless companies involved announced plans to discontinue 3G before the onset of the COVID-19 pandemic, Public Knowledge Senior Vice President Harold Feld said unforeseen circumstances, like labor and chip shortages, as well as senior citizens' inability to allow service workers into their homes due to virus concerns, have prevented many Americans from upgrading.

"While AT&T argues that alarm companies could have diverted resources from new subscribers in the early stages of the pandemic, this is an unreasonable argument here," Feld wrote. "People eager to have new alarms installed in 2020 were not the same people who already have alarms and were unwilling to allow workers into their homes. Nor could the alarm industry reasonably have anticipated the length and severity of the chip shortage."

A little over two weeks after AT&T began 3G shut downs, Bill Signer, executive managing director at the Carmen Group, a government affairs consulting firm, said that though it is hard to measure the amount of unreported injuries due to disconnections at this point in time, the disruptions are certainly causing problems.

"A lot of 911 switchboards are being lit up with signals saying certain devices are no longer working, which is distracting for operators," Signer said in an interview with S&P Global Market Intelligence.

Feld said the majority of emergency technology operates on AT&T's network. While Verizon's and T-Mobile's 3G sunsets will likely cause similar issues, the magnitude will be smaller. Because AT&T was the first and the largest emergency service provider to shut down, the negative effects were amplified, he said.

In an August 2021 petition to the FCC, representatives of AT&T wrote that the global chip shortage should not absolve alarm companies from upgrading their systems.

"Whatever the precise dimensions of the global chip shortage, it has not kept the major alarm companies from continued success in winning and activating new customers, as confirmed by the highly positive investor presentations," the petition states.

3G technology has also allowed drivers to use GPS navigation, locate stolen vehicles and contact 911 for over 20 years.

Some auto manufacturers have posted information to their websites to address common questions about affected technology. General Motors Co., for example, wrote that vehicles using OnStar on a 3G network will require a software update by February 2022. AT&T is OnStar's sole network provider.

The rise of smartphones, which 85% of Americans now own, according to Pew Research, has made drivers less dependent on in-car technologies like navigation and emergency calling. Roger Lanctot, director of automotive connected mobility at the consulting firm Strategy Analytics, said he does not expect all impacted auto owners to take advantage of upgrades, since many feel comfortable depending solely on their smartphones in the case of an emergency. Despite high smartphone usage in the U.S., Lanctot expects automakers to include a variety of data-dependent in-car technologies for years to come.

The risk goes beyond consumer vehicles, where most drivers have smart phones, Feld said.

"School buses as well as trucks automatically report vehicle safety data over 3G networks," Feld said in an interview with S&P Global Market Intelligence. "If operators no longer have access to this, at-risk vehicles will be on the road."

does t mobile have 5g phones