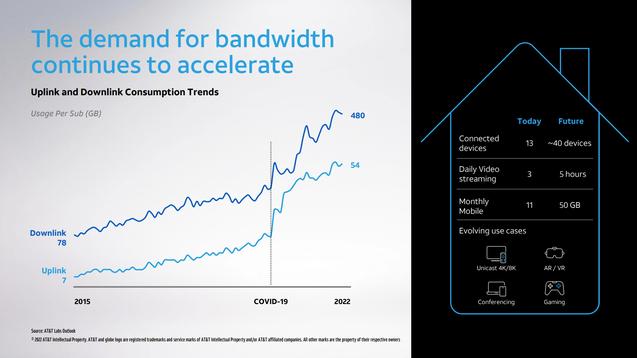 AT&T: Slow Growth Is More Than Priced In

AT&T (NYSE:T) laid out its plans on March 11, 2022 for business after the spinoff of WarnerMedia. In the spinoff, T shareholders will get about 0.24 shares of Warner Bros. Discovery (WBD) T share they own. When this happens, the price of a T share will drop by about $5.76 (the current value of 0.24 of a Discovery (DISCK) share). Also, the dividend will be cut to $0.2775 per quarter from the previous $0.52. Since the spinoff is on track to close in April, the lower amount will be in effect for the dividend to be paid in May.

The media spinoff and dividend cut are really an acknowledgement by management that they have been underinvesting in the base business and need to step it up to retain customers and stabilize revenue per user. These investments mainly involve increasing the coverage of the company's fiber network and adding mid-band 5G capacity to utilize the spectrum on which the company already spent over $22 billion.

AT&T will see near term improvements from lower interest costs post-spinoff as well as the ongoing operating cost savings program. The company will see modest revenue and EBITDA growth as the fiber and 5G spending begins to deliver benefits. Beginning in 2024 when the network is in a good enough position to step down some of the capex, free cash flow will increase, enabling share buybacks, dividend increases, or opportunistic growth projects.

Following the spinoff, AT&T will be a more focused telco like Verizon (VZ) with similar growth prospects and debt levels. Still, the standalone telco, with the share price adjusted for the spinoff, will be valued at only about 7.14 times 2022 earnings. This is a significant discount to the 9.73 times for Verizon. While AT&T's growth prospects are not exciting, they are more than priced into the stock at this point. T is a buy with a safer but still attractive dividend yield and 25% capital appreciation potential.

The main driver of AT&T's strategy is the rapidly growing demand for data spread across a growing number of locations. Over the last 7 years, data download usage is up by a factor of 8 times. Upload usage is up by an even larger factor as work-from-home and gaming applications demand symmetric bandwidth capacity in both directions. This growth is set to continue as the number of devices per location and streaming time continue to increase.

To meet this high demand for data, AT&T is focusing more heavily than its competitors on expanding its fiber network. Fiber offers similar upload and download speeds and has a lower service cost than wireless at high data consumption rates above ~300 GB per month. As stated in the press release:

AT&T plans to double its fiber footprint to 30-plus million locations (compared to 2Q 2021), including increasing its business customer locations by 2x to 5 million. In doing so, the company expects to add 3.5 million to 4 million customer locations each year.

On the wireless side, the company will begin using the mid-band 5G spectrum that it acquired in auctions last year. This spectrum is suitable for less dense suburban and rural areas where the faster high band or mmWave spectrum is limited by distance. From the press release:

In 2019, AT&T wireless had 480,000 net adds out of a total 6 million for the industry, or only 8%. In 2021, they had 3.2 million net adds, representing an industry-leading 34% of the total. AT&T grew new adds by focusing more on retaining existing customers than on acquiring new ones. The company's commercials use the tagline "Everyone gets the best deals." Even though the emphasis was not on acquisition, AT&T increased net adds by reducing the number of customers leaving. The fiber strategy also creates a cross selling opportunity for wireless. The company states that wireless market share is 50% higher in areas where fiber is available. 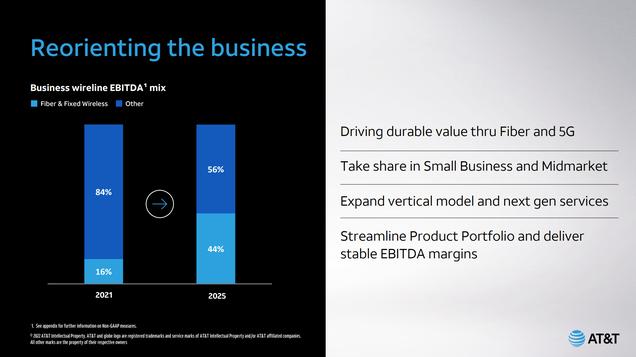 On the business side, AT&T is strong with large enterprises, having relationships with 90% of Fortune 1000 companies. AT&T has a dominant position with public safety organizations through its FirstNet service. Outside of phones, the company has 95 million connected IoT devices and over 50 million connected cars representing an 80% market share. The growth opportunity is with small and medium businesses where the company plans to use its growing fiber footprint to increase customer locations from 3 million to 5 million by 2025, growing market share from the low 20%'s to around 30%.

Translating these plans to EBITDA, AT&T expects 2022 to be the last year of significant decline in business wireline performance. This segment should stabilize in 2023 as growing fiber and fixed wireless service offsets declining legacy business services.

AT&T expects cost savings from shutting down a significant portion of its legacy copper network. Fiber is increasing from 20% of the network in 2021 to 75% by 2025 with copper-based infrastructure being cut in half. The company is also lowering costs by consolidating the number of services offered and billing systems, reducing the number of data centers, moving applications to the cloud, and reducing real estate footprint as more employees work from home. These efforts have cut costs by $3 billion so far and are on track to deliver an additional $3 billion by the end of 2023.

The financial result of this strategy is low single digit sales growth. Adding in the cost savings efforts, EBITDA is expected to grow about $1.2 billion (3%) in 2022 and $2.5 billion (6%) in 2023. (All estimates are midpoint and exclude contribution from WarnerMedia and other sold assets for all years.) EPS growth is not as large due primarily to higher taxes despite lower interest payments after the spinoff. 2022 EPS of $2.44 is only 1.2% better than 2021, and 2023 EPS of $2.55 is 4.5% better than 2022. Capex is at a high point of $24 billion per year in 2022 and 2023. In 2024, capex is expected to come back down to $20 billion. The resulting free cash flow is $16 billion in 2022 and $20 billion in 2023. Note that the company revised its method for calculating free cash flow to subtract cash used in vendor financing. This activity was always going on and is reported in Financing cash flows, but was not included in the FCF calculation until this presentation.

For 2022, the new annual dividend of $1.11 per share will use $8 billion of cash, leaving another $8 billion to bring down debt. AT&T will receive about $37.5 billion from WBD in conjunction with the spinoff. This includes $24.5 billion at the close and an additional $13 billion after the closing. (Note this includes $5.5 billion of working capital adjustments compared to the originally announced $43 billion payment.) By the end of 2022, net debt will decline as follows:

FCF after dividend: $8 B

Based on the EBITDA estimates in the above slide, AT&T will have net debt/EBITDA ratios of 2.8 for 2022 and 2.35 in 2023. This is below the stated level of 2.5 where the company would consider share repurchases or additional growth capex.

It's interesting that the company did not mention dividend increases as one of the choices for capital return, but I expect them to revisit this as we get closer to 2024. With capex down $4 B in 2024 (and FCF up) in 2024, the added FCF would support an additional $0.55 available for dividends, nearly a 50% increase from the initial post-spinoff amount.

Comparing AT&T's leverage post-spinoff to Verizon's, we see that Verizon had net debt of $147.6 billion and 2021 EBITDA of $45.3 billion, for a ratio of 3.25 which is above where AT&T expects to be after the spinoff.

Verizon also has similarly low growth prospects based on consensus EPS estimates. EPS growth is forecast at 1.2% in 2022 and 2.9% in 2023. There does not appear to be a good reason for the undervaluation of AT&T except mistrust of forecasts based on poor historical performance. With AT&T now more focused on the core business, the valuation gap should close as investors begin to see results.

AT&T is not becoming an exciting growth stock after the spinoff, but they are taking the necessary steps to retain existing customers and grow modestly. The investments over the next two years to add fiber and turn on mid-band 5G will temporarily increase capex, but funds are still available for debt reduction after paying the $1.11 in dividends. Starting in 2024, a $4 billion reduction in capex gives the company more capital flexibility, including capacity for a 50% dividend raise if the board decides to go that way.

After the spinoff, AT&T will have EBITDA within 10% of Verizon's. AT&T will also have lower leverage than Verizon as measured by net debt/EBITDA. AT&T will also have a similarly low rate of earnings growth. Given these similarities, AT&T should not be trading at a 25% discount to Verizon. Expect the market to close this gap as AT&T delivers results post-spinoff.