Home 5G mobile phone Flashback: a look back at the first 5G smartphone 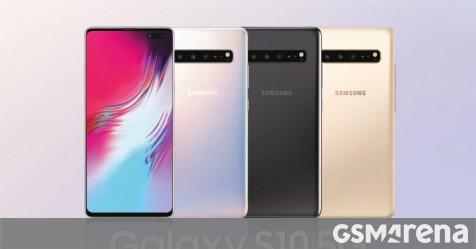 Flashback: a look back at the first 5G smartphone

5G is still advertised as a new and exciting development in mobile technology, but it has been over 2 and a half years since the first 5G phone launched, so it’s not all that new. And yet some countries are still at the trial stages and don’t have a commercial 5G network active. Not that this stops smartphone makers from boasting about launching the latest 5G phone.

Let’s go back in time to early 2019 when the first gaggle of 5G phones appeared. Many were unveiled in February, but wouldn’t launch until months later. Despite a slight delay it was the Samsung Galaxy S10 5G that became available first.

Originally set to release in March, the phone finally hit the stores in South Korea on April 5. It was also supposed to launch on Verizon in the US on that same date, but another delay pushed that back and pre-orders started on April 25 (and shipping wouldn’t start until mid-May).

Before we go back to the S10 5G, we should mention the phones that nearly came first. LG was planning to launch its V50 ThinQ 5G on April 16, but pushed that back to optimize the 5G modem with Qualcomm. The phone finally became available on May 11. The Oppo Reno 5G also arrived in May, actually coming out before the LG V50 because of the delay.

These two were powered by the Snapdragon 855, but that’s not what gave them their 5G connectivity. It was meant to be paired with an external X50 modem, the first 5G chip form Qualcomm. And as you can imagine, there were some teething issues with it, so makers had to shift their original timelines.

Back to the Galaxy S10 5G. It reached the UK in early June, US’s AT&T in mid-June (it was AT&T’s first 5G phone), Sprint a few weeks later and was in Germany in late June (before the country’s first 5G network was even switched on).

The phone itself was huge – with a 6.7” 1440p Dynamic AMOLED display it was sort of the Ultra phone of the family, before Samsung introduced that label. For comparison, the Galaxy S10+, the biggest of the S10 4G line, had a 6.4” display. It was heavy too, tipping the scales at 198g. 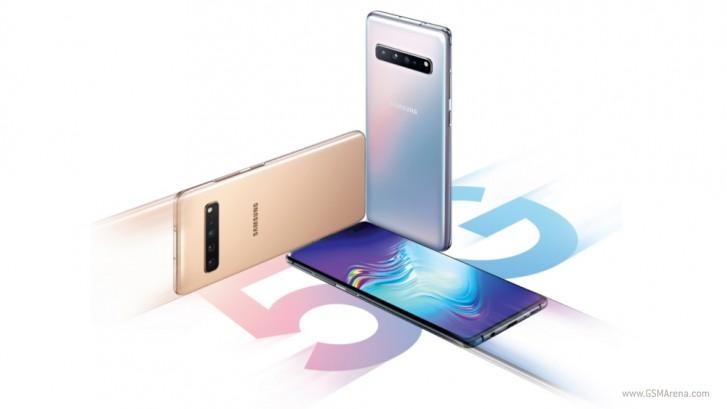 This phone marked several firsts for Samsung. For example, it was the first Galaxy phone to support 25W wired charging (though others were quick to follow) and It was the first with a 3D depth sensor (time-of-flight). It had two, actually, one on the front and one on the back.

The rest of the camera setup was essentially the same, though the 3D sensor and improved image processing pushed the Galaxy S10 5G to the top of DxOMark’s charts at the time.

It wasn’t all peachy, though, this model lacked a microSD slot whereas the three other S10 models had one. It did get some special treatment as the Crown Silver colorway was exclusive to the 5G model, it had a prismatic effect that changed color when viewed at different angles.

We mentioned the Snapdragon 855 chipset and the X50 modem before and that is what the S10 5G used in the US. However, the global version (including phones for Korea) featured an Exynos 9820 paired with a Samsung modem, the Exynos 5100, which was the world’s first 5G modem.

The modems used in the first 5G smartphones

Both the Qualcomm and the Samsung modem supported mmWave, the version of 5G that operates in the higher frequency bands (starting at 24 GHz). It can carry much more data, but it suffers from reception issues since it can be blocked even by trees. The Sub-6 GHz flavor of 5G (named for the band it operates in) has much better propagation, but it is “only” 2-3 times faster over 4G.

For comparison, the Snapdragon X50 modem had a theoretical peak speed of 7.5 Gbps down, 3.5 Gbps up, while the X24 LTE modem that launched alongside it topped out at 2 Gbps downloads. mmWave has gone higher since then, the X65 was the world’s first 10 Gbps 5G modem, but that’s a story for another time.

Of course, these are theoretical speeds, real life results are lower. Still, under ideal conditions Korea’s SK Telecom achieved 2.63 Gbps using a Galaxy S10 5G. Though that wasn’t all 5G – only 1.5 Gbps were transferred over 5G, which the phone combined with 1.15 Gbps coming down its LTE link. Still, SK got its headline: the latest and greatest smartphone could download a full movie in just 6 seconds.

Before we wrap this up we should mention the 5G-capable phone that launched in 2018 (before the S10 5G and the others). How come that wasn’t the first 5G phone? Well, Motorola was pushing MotoMod add-ons and made a splash with the announcement of the Moto Z3.

It unveiled a 5G mod that would give the otherwise 4G-only phone next-gen connectivity. The problem was that it took until April 11 for the 5G mod to reach stores (this wasn’t the first time that modular phone designs failed). So, the Moto Z3 missed being the first 5G phone by a few days. It was still good timing for the launch – Verizon powered on its 5G network in Minneapolis and Motorola's home town of Chicago that same day.