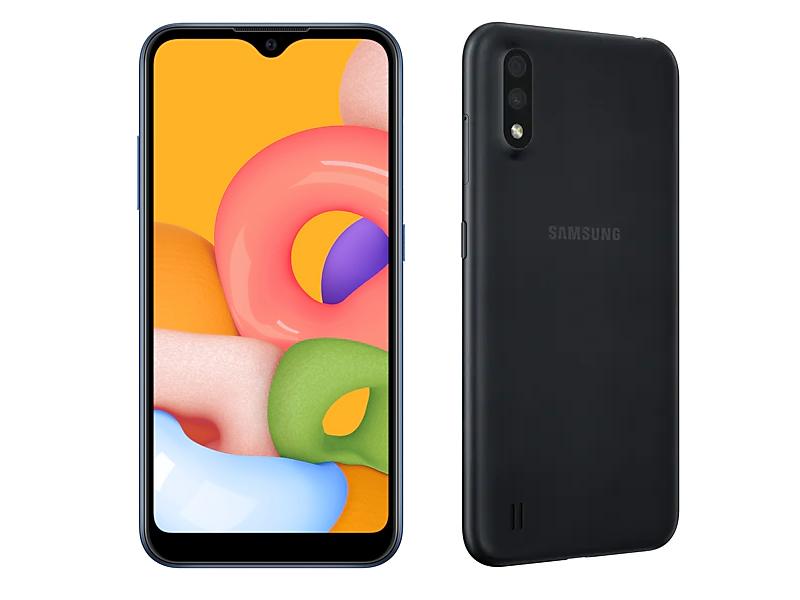 Galaxy A01 review: Bare-bones smart phone for the budget conscious

Thanks to its better camera specs and updated OS, I prefer the Galaxy A01 over 2019's Motorola Moto E6 and 2018's Moto G6, which also can be found for $100 to $150 now. However, the A01 lasted just under 12 hours in our battery tests, so if you want something with more juice and can spend $100 more, consider the Moto G Power instead. In addition to a triple rear camera system and a sharper display, the G Power lasted more than 24 hours during our battery tests.

The A01 has a 5.7-inch LCD display. While watching videos is fine, the phone's 720p resolution means I can't watch videos at the sharper 1080p resolution, which many YouTube videos can be viewed in. Some on-screen icons (like the camera) also look fuzzy on closer inspection, and overall the LCD screen isn't as vibrant and rich as, say, the Galaxy A51's OLED display.

Thin and small enough to navigate with one hand, the A01 has a teardrop notch for its front-facing camera that keeps it looking modern. Up top is a headphone jack and on the backside of the phone are two small slits for the audio speaker grille. This is something to take note of; whenever you put the phone down to watch video, the audio will be slightly muffled against whatever surface it's laying on. When I laid it on my desk I didn't hear much of a difference compared to when I was holding the phone in my hand, but when I put the A01 on my bed to watch videos, the sound did dampen a tad more.

The Galaxy A01's camera takes clear, colorful photos in ample lighting, and red and green hues especially pop in some pictures. There were a few images where the sky was overexposed, and was blown out to white. Later in the evening, I was able to take a good shot of the blue sky, with the foreground and subject matter evenly exposed as well. The camera has an 8X digital zoom that is decent at getting more details from faraway objects, but image quality does get muddier and washed out the closer you zoom.

Live Focus for portrait photos was also really inconsistent. Though some pictures turned out OK, several others had the foreground or object blurred out instead of the background, even after I made sure that the effect was ready to use. Samsung said they are looking into the issue, and I'll update the review when I hear back.

The camera can record 1080p video. Video quality is clear and sharp enough, but the phone doesn't have optical image stabilization so footage won't be super-smooth if you're moving around a lot.

Speaking of photos, you'll likely need to use Google Photos cloud service to store your photos and videos or invest in a microSD card. The phone only has 16GB of internal storage, nearly half of which is taken up by the OS and apps. My review unit is from Verizon and came with many preloaded apps. When I first turned it on, having taken no photos or downloaded any apps of my own yet, it had only 4.9GB of usable memory. After uninstalling as much bloatware as I could (there were some apps I couldn't delete including a bunch of Verizon apps), I got to about 6.8GB. Again, the phone does have expandable memory up to 512GB, so I recommend that route for onboard storage.

Performance is decent with a Snapdragon 439 chipset

Equipped with a Snapdragon 439 processor, the A01 operates quickly enough for the most part. There were times when I noticed it was faster at quitting apps and launching the camera than even the Galaxy A51, which has a more advanced processor. But every so often I noticed that the A01 took a beat or two to do things too, like opening certain apps (Geekbench 4 especially took a while to launch). It wasn't enough to throw the phone out the window, but if you want a lightning-speed user experience, this phone isn't for you.

Benchmark results are also on par with my real life observations, with the Galaxy A01's Geekbench 4 and 3DMark's Slingshot Unlimited scores on par with G6 from two years ago. More recent budget phones, like the Galaxy A51 and Moto G Power comfortably beat the A01 with their more advanced processors. (Note that I could not download Geekbench 5 or 3DMark's Ice Storm Unlimited tests on the phone.)

Powered by a 3,000-mAh battery, the phone can last all through the work day with mild usage. That includes watching videos, snapping photos and browsing the web for a few hours out of the day. During tests for continuous video playback on Airplane mode, the phone averaged 11 hours and 47 minutes. That's a good time to clock in (and that's longer than, say, the Pixel 4 from last year, which initially sold for $800, mind you, and lasted only 10 hours). But both the A01 and Pixel 4 have one of the shortest battery runs I've seen in the last two years. If you want something way longer, check out the Moto G Power, which lasted more than 24 hours for the same test. We're also conducting streaming video battery tests, and I'll update the review when I have those numbers.