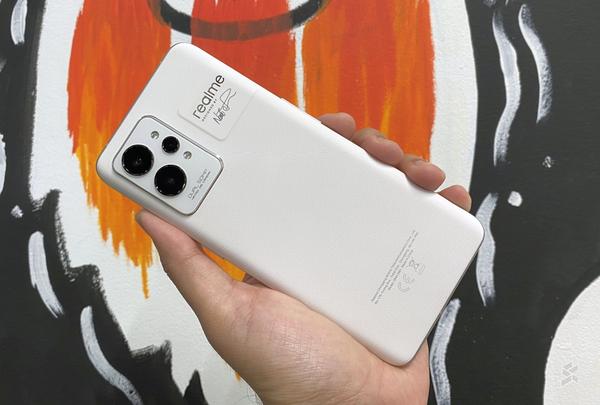 Realme Malaysia is about to launch the GT 2 Pro which claims to be their most premium flagship to date. The device was introduced during MWC 2022, and Realme has teased that it will be the most affordable flagship smartphone with a Snapdragon 8 gen 1 chip in Malaysia.

The Realme GT 2 Pro Malaysian Launch is taking place at 2pm on Thursday, 24th March 2022. You can watch the live stream event on the official Realme Malaysia Facebook Page. From the teaser image, it appears that Malaysian consumers are only offered a single option in Paper White as shown above.

According to the global specs, the Realme GT 2 Pro comes with a 6.7″ Quad HD+ (3216×1440 pixels) display that has a variable 1-120Hz refresh rate with LTPO 2.0 technology. It also boasts a peak brightness of 1400 nits and touch sampling rate up to 1000Hz. The GT 2 Pro also gets Corning’s Gorilla Glass Victus for better durability. 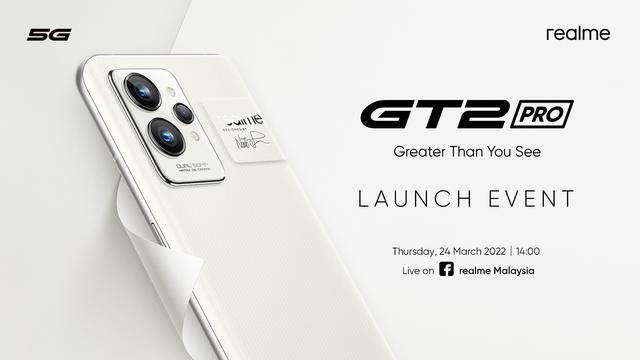 In terms of appearance, the back of the GT 2 Pro features a textured paper-like surface which gives it a unique look and feel. Besides the camera bump there’s a slightly raised cube which highlights “realme” and industrial designer Naoto Fukasawa.

The Realme flagship device can be configured with 8GB or 12GB of LPDDR5 RAM and with either 128GB or 256GB UFS 3.1 storage. For taking pictures, the rear gets a triple-camera setup that consists of a 50MP f/1.8 main camera which uses Sony’s 1/1.56″ IMX766 sensor with optical image stabilisation. It also gets a 50MP ultra-wide-angle camera lens which Realme claims to be the first to offer a 150-degree wide-angle on a smartphone.

The third shooter is a micro-lens camera which claims to offer up to 40x magnification. This seems to be similar to the “microscope” feature taken from the Oppo Find X3 Pro but it can only record video in 720p. Upfront, the punch-hole on the display houses a 32MP selfie camera that uses Sony’s IMX615 sensor.

The GT 2 Pro features super linear dual-speakers and Dolby Atmos Audio certification, however, there’s no 3.5mm headphone jack. Besides supporting 5G in both SA and NSA architectures, it also supports WiFi 6, Bluetooth 5.2 and NFC. The device also gets an in-display fingerprint sensor which apparently can work as a heart rate sensor.

Powering the GT 2 Pro is a large 5,000mAh battery which supports 65W SuperDart Charge via USB-C. According to Realme, the device can get a 100% charge in just 33 minutes. Out of the box, it runs on Android 12 with Realme UI 3.0 skin on top.

Other Snapdragon 8 Gen 1 contenders in Malaysia

The Samsung Galaxy S22 series are the first smartphones to launch locally with Qualcomm’s latest flagship chip. The most affordable of the bunch is the base 6.1″ Galaxy S22 with 128GB which is priced at RM3,499.

If you don’t want to spend more than RM3,000, the next affordable option is the recently launched Xiaomi 12 which comes with a compact 6.28″ Full HD+ display. The base model with 8GB RAM and 128GB storage is currently going for RM2,799, while the 256GB storage option is priced at RM2,999.

For bargain hunters, the most affordable Snapdragon 8 gen 1 device at the moment is the Motorola Edge 30 Pro. The single 12GB RAM + 256GB storage variant is priced at RM2,699 and you could have gotten a RM100 discount during if you get it during earlier pre-order period.

If the Realme GT 2 Pro aims to be the most affordable new flagship device, it has to be priced at less than RM2,699. On paper, the new Realme contender seems to tick all the right boxes except that it lacks a telephoto camera and water resistance rating. Stay tuned until next week to find out more about its Malaysian pricing and availability.

what chip will powere 5g smartphones