Home 5G mobile phone Samsung Galaxy A73, A53 and A33 announced

The Galaxy A series welcomes two new 5G phones, which introduce a new 5 nm chipset – a chipset that Samsung barely mentions, but it should be the new Exynos 1280. As for the two phones, they are mostly the same save for the display and camera.

The Samsung Galaxy A73 5G is the largest of the three and offers the biggest display – a 6.7” Super AMOLED panel with FHD+ resolution and 120 Hz refresh rate. That replaces a display of the same size with 90 Hz refresh rate on last year’s A72.

And that one was a 4G only phone, we never got a 5G version. Clearly, the A73 does offer next-gen connectivity. The unnamed chipset is paired with 6/8 GB of RAM and 128/256 GB storage, plus a microSD slot for up to 1 TB more.

The phone boasts a 108 MP main camera with an f/1.8 lens with OIS, replacing the old 64 MP sensor. There’s no telephoto lens this time around, however, so the phone relies on its high resolution main sensor to do the zooming in.

The main camera is joined by a 12 MP ultra wide camera, a 5 MP macro cam and a 5 MP depth senor. On the front is a 32 MP selfie camera punch holed into the display.

The Samsung Galaxy A73 5G will be available in select markets from April 22, pricing details are TBA.

The Galaxy A53 5G is equipped with a 6.5” Super AMOLED display with FHD+ resolution and 120 Hz refresh rate. The 32 MP selfie camera is punch holed into the display.

Flipping over to the other side, the main camera has a 64 MP sensor and an f/1.8 lens with OIS. Joining it are a 12 MP ultra wide module (f/2.2), a 5 MP macro camera and a 5 MP depth sensor. Those numbers may not make Galaxy A52/A52s owners jealous, but the new model is not without upgrades.

The new chipset can fuse up to 12 images for improved Night mode shots. It also uses two cameras in Portrait mode for a cleaner separation between subject and background. And it has smarts that allow it to automatically pick the best frame rate for recording video given the ambient light. 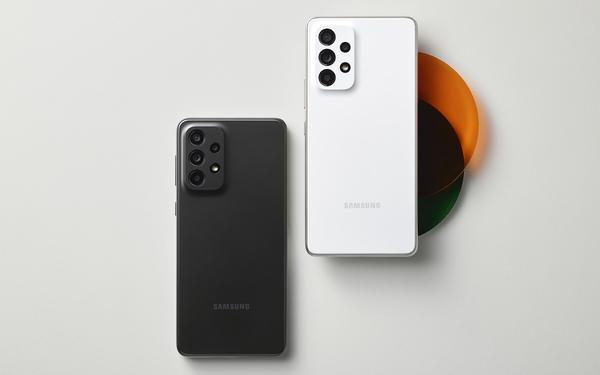 The Samsung Galaxy A53 5G will become available in select markets on April 1. Prices for Germany are in the table below (we’re including the A33 5G here too):

In the US it will launch the day before (March 1) at a price of $450 for a SIM-free unit. It will also be available through T-Mobile, Verizon, AT&T and other carriers from April 1. Pre-orders start today and if you do pre-order, you are eligible for a free pair of Galaxy Buds Live.

The Galaxy A33 5G is roughly the same size as the A33, though it shrinks the display to 6.4” and the refresh rate to 90 Hz. It is still a Super AMOLED panel with FHD+ resolution. This is a massive improvement over the A32 5G, which had a 60 Hz LCD with HD+ resolution. It’s a better display than what the new Galaxy A23 and M33 have to offer as well.

Moving on to the camera, the main module houses a 48 MP sensor and an f/1.8 lens with OIS. The ultra wide module here has an 8 MP sensor, the front facing camera drops down to 13 MP (though notice that it’s inside a notch rather than a punch hole). As for the auxiliary cameras on the back, the macro keeps the 5 MP resolution, the depth sensor is down to 2 MP.

The rest is the same as on the A53 5G or to put it another way, better than the A32 5G. That one also had a 5,000 mAh battery, but with only 15W charging it needed nearly 2 and a half hours for a full charge. Samsung says that the new phones will go 2 days before needing to be plugged in.

Both phones are rated IP67 for dust and water resistance. They also feature Gorilla Glass 5 on the front to protect their displays.

The Samsung Galaxy A33 5G will be available from April 22 in select markets.

The Galaxy A53 5G and A33 5G launch with Android 12 and One UI 4.1. Samsung guarantees that they will receive four Android OS updates and up to five years of security patches.

Samsung is also preparing to launch a new Onyx color for the Galaxy Buds2 and Buds Live next month to complement the looks of the new A-series phones.

The new Galaxy A series will not include a charger in the retail package, which Samsung paints as an eco-friendly move as it makes the packaging smaller. Speaking of the packaging, it is made out of sustainably sourced paper. The phones themselves use recycled post-consumer materials for the side buttons and SIM card trays.

does t mobile have 5g phones