Samsung Galaxy S22 Ultra 5G is the ultimate flagship smartphone out of the three and the best smartphone Samsung has offered to date. There are a lot of things to get excited about on the phone. The phone has a new design; a faster, efficient and better processor; more touch responsive and better protection and many more. However, all these exciting features come with a hefty price tag. Let’s get into the details of the phone to know more.

The front and back of the phone are protected by Corning Gorilla Glass Victus+, probably the most durable screen protector to date. Also, the aluminium frame used on the phone is the strongest armour aluminium frame yet on a Galaxy phone. For further safety, the phone is also IP68 dust/water resistant (up to 1.5m for 30 mins).

Samsung Galaxy S22 Ultra 5G features a massive 6.8-inch Dynamic AMOLED 2X, HDR10+ display. With a maximum resolution of 1,440*3,088 pixels, the display can achieve a peak brightness of up to 1,750 nits. The phone also has a vision booster feature that makes it easier to use during daylight. The phone has a 120Hz adaptive refresh rate and can switch from 120Hz to as low as 1Hz depending on what you are using.

Furthermore, Samsung Galaxy S22 Ultra 5G has a built-in S pen and this is the first time ever for an S-series flagship. The phone is said to be 3x more responsive to S pen than the predecessor. The phone also has an Ultrasonic under-display fingerprint sensor.

Over the years, Samsung has really worked on the improvement of its cameras and now it is one of the best camera smartphones in the market. Samsung Galaxy S22 Ultra 5G features the most powerful AI camera yet on a Samsung device. There is a quad-camera setup on the back of the phone and has a single selfie shooter on the front. The main 108MP camera is accompanied by a couple of 10MP telephoto lenses and a 12MP, 120 degrees ultrawide sensor. On the front, there is a 40MP selfie camera for taking photos and shooting high-resolution videos.

The main camera can take high-resolution videos up to 8K and while recording the videos from the main camera, the phone also records stereo sound giving an immersive viewing and hearing experience to the users. Meanwhile, the front camera can record videos in 4K resolution up to 60fps.

There are tons of camera features on the phone to help the user capture brilliant shots. The camera features a 100x space zoom, Nightography, pro mode, single take, super slow-mo, hyper-lapse, director’s view and many more. Samsung has also put more focus on night photography and videography this time. The camera on the phone features an integrated dual-track feature for stable low light video along with the stereo sound recording. 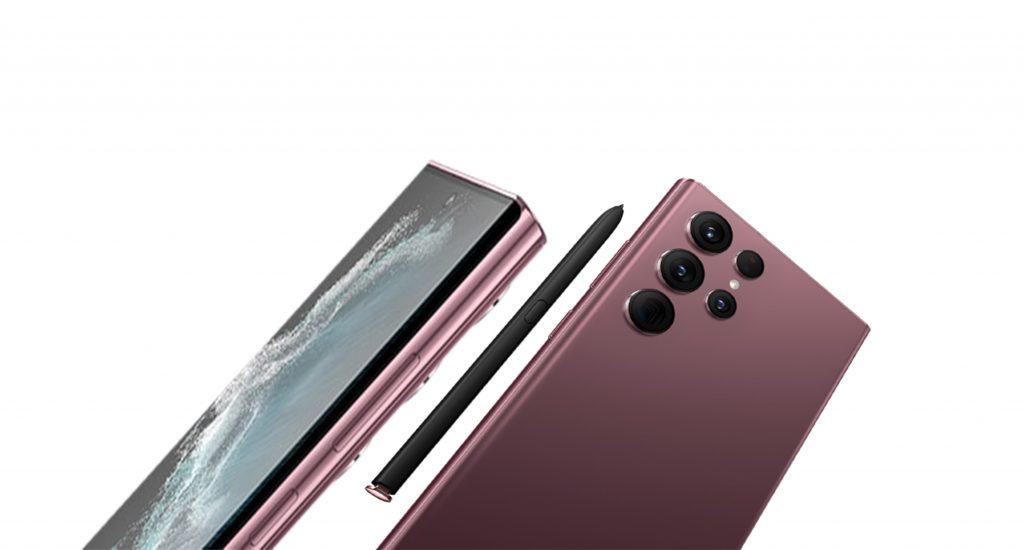 Samsung Galaxy S22 Ultra 5G runs on Android 12 with One UI 4.1 on top. The phone is powered by either Exynos 2200 (4nm) or Qualcomm Snapdragon 8 Gen 1 (4nm) chipset depending on the region. These are the best chipset that any Android smartphone can have right now and is likely to remain the same throughout the year. The 4nm chipsets deliver into nearly every aspect of the phone, from epic night shots to incredibly clear photos and an optimised mobile gaming experience.

The price of the Samsung Galaxy S22 Ultra 5G starts from $1,199 which is the same as last year’s flagship Samsung Galaxy S21 Ultra. However, the S pen was excluded from S21 Ultra and had to be purchased separately, which now is a part of the S22 Ultra.

Samsung Galaxy S22 Ultra 5G is a fantastic smartphone. It is also a replacement for the famous Note series from Samsung. Samsung always had two premium flagships and only two years ago, it decided not to continue the Note series. One of the major highlights of the Note series was the S-Pen. Though S21 Ultra supported the S-Pen, the user had to purchase it differently and there was no built-in spot for the pen. This changed with the latest release of Samsung Galaxy S22 Ultra 5G as it is the first Galaxy S smartphone to have a built-in S-Pen.

Major upgrades can be seen on the phone. First of all, this phone has a better and more efficient processor enabling the phone to perform the task faster with minimal use of the power. The display is also brighter on the phone and is probably the brightest on the market at the moment.

The battery power and the camera specifications may look the same, but Samsung Galaxy S22 Ultra 5G has a faster-charging power of 45W compared to the 25W of the S21 Ultra. Also, the size of the telephoto lenses on the Samsung Galaxy S22 Ultra 5G is bigger so that it can capture more light for a clear and brighter picture. This device also has a new anti-reflective coating which reduces light flares. This phone also offers better night photography. So, though the specifications may look similar on the paper, the details tell otherwise.

However, Samsung Galaxy S22 Ultra 5G could have worked in some departments to make the phone even more interesting. The phone only has a 45W fast charger while its competitor OnePlus 10 Pro provides 80W fast charging and 50W fast wireless charging. Though this may not be a serious problem for the users, a faster charger would definitely have been better. Also, the battery power remains the same as it was in the last year.

The phone records videos in 8K resolution, which is the highest resolution for a smartphone in the market at the moment. This is great, but it could have done more with the 4K resolution videos. The Samsung Galaxy S22 Ultra 5G can record 4K resolution videos in 60fps only which seems basic for a flagship smartphone. Also, the ultrawide camera provides 120 degrees FOV only, which was the same last year as well. Compared to that OnePlus 10 Pro provides 150 degrees FOV which is a huge difference between the two.

Apart from a few shortcomings, Samsung Galaxy S22 Ultra 5G has a lot to offer for the users and is definitely one of the best smartphones released to date.

Also, check the price of Samsung phones in Nepal.