Signing LOI with City U - HKATG Moves Forward Against Pandemic

HONG KONG, March 16, 2022 /PRNewswire/ -- Despite Hong Kong is facing its worst outbreak of a pandemic, it has not hindered the steady progress of Hong Kong Aerospace Technology Group Limited (HK.1725). In addition to the Group's plan to launch 25 satellites this year, besides the plan of launching 25 satellites, the Company announced its collaboration with the College of Engineering of City University of Hong Kong (''CityU'') on 14 March 2022 (Monday). The parties have entered into the letter of intent (the ''LOI'') concerning the strategic cooperation in the research and development of advanced satellite technology and related applications in Hong Kong, covering communication systems, antenna technology, advanced materials, data processing and energy management.

According to the LOI, HKATG and the College of Engineering of the City University of Hong Kong agreed to conduct cooperative research on aerospace technology. Meanwhile, both parties intend to cooperate in the development of basic manufacturing technologies applicable to aerospace and satellites; the development of technologies for remote data transmission, and the transformation of scientific research achievements with commercial applications. The LOI commenced on the date of the execution and will be effective for 3 years.

It is said that HKATG will partner with the State Key Laboratory of Terahertz and Millimeter Waves at the City University of Hong Kong, the laboratory was established in March 2008. It is the first laboratory of its kind in the engineering discipline in Hong Kong. 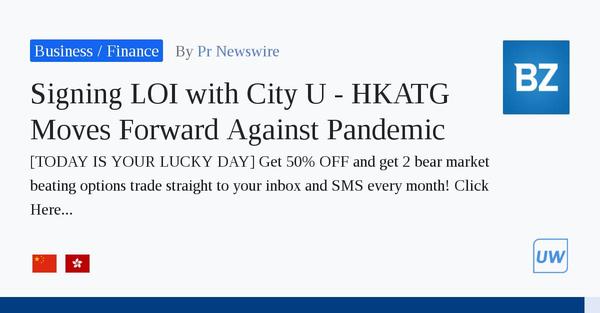 Led by internationally renowned academics, the laboratory focuses on the two major areas of big data imagery and wireless communication applications, promotes the new generation of the information technology industry, in the hope of transforming Guangdong and Hong Kong as an international technology innovation hub. Professor Chi Hou Chan, Director of the State Key Laboratory of Terahertz and Millimeter Waves focuses on antenna research, while the deputy director, Dr. Hang Wong focuses on satellite communication.

The antenna research team of the State Key Laboratory of Terahertz and Millimeter Waves has made significant contributions to the development of modern antenna for wireless communication, especially in the development of bandwidth for millimeter-wave applications, transparent antennas, and magneto-electric-dipole.

High-performance antennas are widely used in wireless communication, their Beidou antennas for mobile terminals contributed to the rescue mission in the 2008 Wenchuan earthquake. Other inventions can be found in the 5G base-station and smart phones. The team is now engaging in the research of on-chip antennas, beam steering devices and active phased array for 6G wireless communications.

Act in concert with the megatrend of Connectivity

The joint lab has been working hand in hand with the Shenzhen Academy of Information and Communications Technology (SAICT), Shenzhen University, and leading corporations on the mainland. According to the leader of the research team, Professor Luk Kwai-man, Chair Professor of Electrical Engineering, despite 5G mobile communications technology has been gradually launched all over the world, it still can't support big data image communications. As we are stepping into the post-5G era and will soon embrace 6G, the IoE (Internet of Everything) will become a prevalent trend with users expecting better transmission efficiency and image quality.

Since HKATG is principally engaged in electronics manufacturing services business; and aerospace business, currently under the ''Golden Bauhinia Constellation'' project, which includes a smart city with satellite big data applications and solutions; satellite measurement and controlling; satellite manufacturing; and satellite launching, the cooperation with the State Key Laboratory of Terahertz and Millimeter Waves at the City University of Hong Kong will have a positive impact on the future development of HKATG's aerospace business and facilitate building Hong Kong into an international aerospace innovation and technology hub.