Home 5G mobile phone Will 5G mobile networks in the US really interfere with aircraft? 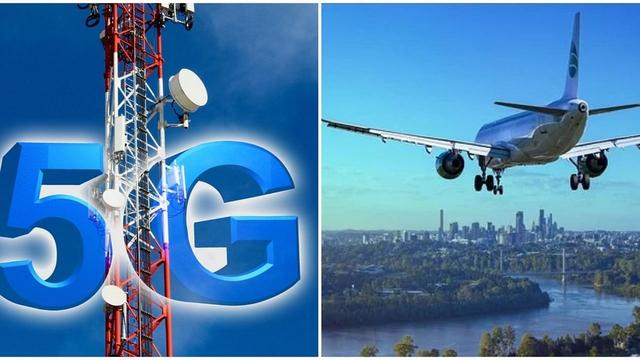 Will 5G mobile networks in the US really interfere with aircraft?

The US Federal Aviation Administration (FAA) has raised concerns that 5G telephone networks will interfere with radio altimeters fitted to some aircraft. These are crucial for making landings in poor visibility and for helicopters flying at low altitude. Nonetheless, the Federal Communications Commission (FCC) has authorised the roll-out of these networks, including the placement of phone masts near airports.

The radio spectrum is a public resource, and it is both congested and hotly contested in the US. Nothing goes to waste and industries lobby hard to secure their portion. Unfortunately, the part of the spectrum set aside for vital aircraft operations sits very close to that assigned for 5G in the US and raises the chance of interference.

What exactly is 5G?

In short, it’s the fifth generation of mobile phone technology. Like 4G before it, 5G is a cellular technology. A country is divided up into cells, each with a phone mast at its centre. Phones and tablets connect to that mast to access the phone network and internet via radio waves.

There is no single part of the electromagnetic spectrum that 5G occupies. Some countries are using 600 megahertz to 900 megahertz, which isn’t dissimilar to 4G. Some are placing it between 2.3 gigahertz and 4.7 gigahertz, which boosts data speed somewhat. And others are using 24 gigahertz to 47 gigahertz, which requires more towers but offers even higher data speeds. In many cases a network will use a mix of these. In the US, the frequencies allocated for 5G are closer to those used by aircraft than those allocated by the EU. 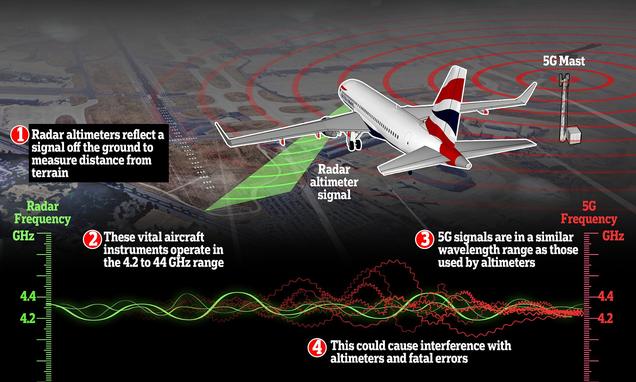 Radio altimeters operate in the 4.2 gigahertz to 4.4 gigahertz band, and the US has set aside a portion of the spectrum right up to the lower band of that for 5G. In the UK, the comparable band ends at 4 gigahertz and in the EU, it ends at 3.8 gigahertz.

Who regulates the use of each frequency?

Most governments have an agency that controls the radio spectrum – in the US, that is the FCC. The agency set aside large parts of the spectrum for 5G as far back as July 2016. The problem is that the FAA believes that this could be close enough to the part of the spectrum used by aircraft to cause problems. It warned in November that airlines “should be prepared for the possibility that interference from 5G transmitters and other technology could cause certain safety equipment to malfunction, requiring them to take mitigating action that could affect flight operations”.

In other countries this possibility has been mitigated by close cooperation between departments and countries. The French Civil Aviation Authority had already warned of the same issue early in 2021. Phone masts near airports in France were then limited in power, as they were in Canada. The European Union Aviation Safety Agency says it has been working with aircraft makers, airlines and state spectrum regulators to avoid problems, and that “no rise of unsafe interference has been identified in Europe”.

Have mobile phones caused issues in the past?

There have been bans on using mobile phones on planes in many countries due to concerns about interference. But these have slowly been lifted as technology improved and use was proven to be safe. New 5G networks present fresh concerns.

George Holmes at Resonant Inc., a US company that makes safety devices to stop aircraft experiencing radio interference, said that planes are less likely to experience problems in the EU than in the US because of planning when rolling out the networks. “We’re dealing with very low probabilities but extremely devastating consequences,” he said.

The Radio Technical Commission for Aeronautics, a US non-profit that advises on technical issues, published a report in 2020 that concluded that the risk is “widespread and has the potential for broad impacts to aviation operations in the United States, including the possibility of catastrophic failures leading to multiple fatalities, in the absence of appropriate mitigations”. If even a small risk exists, the heavily regulated airline industry will impose restrictions.

Tom Wheeler, a former chairman of the FCC, wrote in a piece for US think tank the Brookings Institution that while there are genuine concerns, the FCC is “constantly being called upon to play referee between various users of spectrum”, and points out that alleged “interference” can also be played to gain a competitive advantage.

AT&T and Verizon, telecoms companies that run two of the largest cellular networks in the US, were due to turn on their 5G networks on 19 January, having already delayed twice due to safety fears. AT&T has now postponed again, according to a BBC report. Small buffer zones to limit 5G use around major airports have been temporarily agreed, but many airports fall outside these zones.

The FAA has signed-off around 45 per cent of US commercial planes to operate, even in poor weather, at airports where 5G will be switched on. It says more approvals will come before the network switches on. But in recent days it has also issued more than 1450 official notices that warn pilots not to fly near known hazards, in this case certain new 5G towers.

Bosses of several airlines have written to the US government to warn that these restrictions could lead to large numbers of flight cancellations. “To be blunt, the nation’s commerce will grind to a halt,” says the letter.

Time will tell how the matter is resolved, but, in truth, both the telecoms industry and the airline industry are too profitable for a solution not to be found quickly. It is likely that existing altimeters will be rated as safe eventually, or new ones will be designed that are more robust against 5G interference.

More on these topics: