Did you miss a session at the Data Summit? Watch On-Demand Here.

This article was contributed by Hatem Zeine, founder, president and CTO of Ossia

The Internet of Things (IoT), which is currently estimated to connect well over 10 billion devices, is expected to grow rapidly in a 5G environment, CISCO estimates an excess of 500 billion devices connected by 2030. One of the pillars of 5G coverage is its ability to increase the number of connected devices by orders of magnitude; the first time we will have a network that can truly connect every device in the world.

Now that massive connectivity is being solved by 5G, there is a barrier that doesn’t get enough attention, preventing the deployment of IoT: power. Today’s typical wired and battery power delivery methods aren’t up to the challenge of powering hundreds of billions of devices; humanity has not built that many batteries in 200 years, and there is no way we will not be wiring that many. We’ll need to rethink how we power sensors and devices to meet the challenge and realize the promise of the 5G-enabled IoT. Fortunately, there’s an alternative: wireless power.

While it’s true that globally, 5G makes it feasible to scale up the IoT with hundreds of billions of new connected devices, conventional power delivery mechanisms put limits on what the IoT deployment on 5G can be. Wireless power — safe, reliable power that is delivered to devices automatically from a distance — is the modern electrical infrastructure we need and it can be deployed along with 5G. 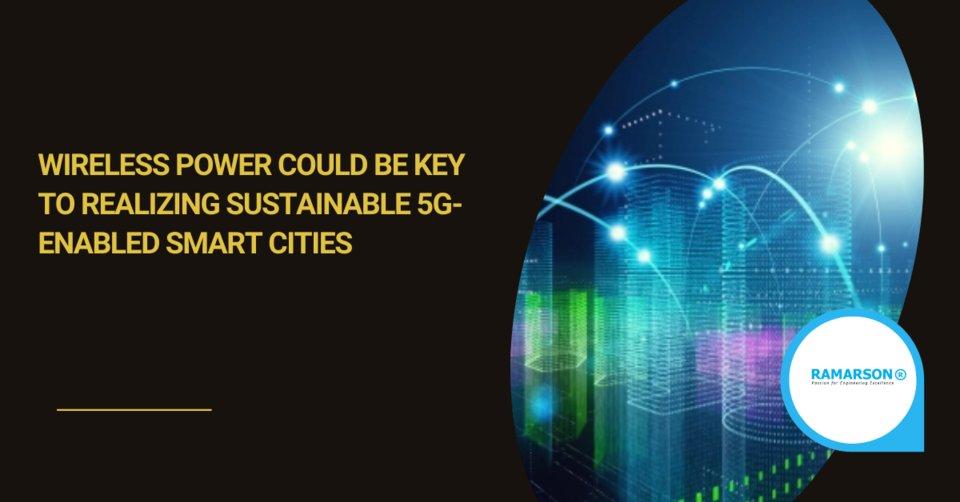 Safe wireless power already exists and it could be deployed at scale to integrate wireless power into buildings and infrastructure along with 5G. This would curtail wiring and maintenance costs while also delivering wireless power that can keep personal consumer smart home gadgets, mobile phones, tablets, gaming devices, etc., inside the buildings charged up automatically too.

Batteries on the other hand have huge environmental costs: extracting the rare Earth metals, manufacturing the batteries and eventually disposing of them have wreaked havoc on our environment.

Sustainability is a core component of the smart city vision. 5G makes it possible for smart cities to harness data and technology to drive efficiency, improve productivity and transform municipalities into sustainable hubs. Wireless power contributes to this goal by reducing the excessive battery and electronic device waste associated with conventional power sources.

Sustaintalytics, an independent research firm, estimated the impact wireless power could have on the IoT over the next five to 10 years. The firm studied just three potential IoT sensor use cases that represent less than 1% of the total number of sensors expected to be deployed over the next several years. Even in that limited capacity, the positive environmental impact of switching to wireless power is projected to be significant:

In a smart city context, a wireless power infrastructure could reduce the waste associated with conventional power while also enabling the wider deployment of 5G network-connected sensors. These could drive smart transit, parking and traffic management initiatives while supporting innovation in other areas, including healthcare, education and public service.

That’s just the beginning. 5G is already inspiring new technology trends across the board. When 5G is combined with wireless power, the two technologies could open a floodgate of creativity, unlocking innovations across sectors, including smart vehicles, smart homes, virtual reality and much more.

5G is a game changer. Its scalability, speed and data capacity have the potential to supercharge IoT innovation. People are rightly excited about the possibilities, including the potential for smart cities. But before the IoT’s promise can be fully realized, we need to overcome the limitations of conventional power to IoT. Wireless power deployed with 5G could be the key to realizing that sustainable vision.

Hatem Zeine is the founder, president and CTO of Ossia.

Welcome to the VentureBeat community!

DataDecisionMakers is where experts, including the technical people doing data work, can share data-related insights and innovation.

If you want to read about cutting-edge ideas and up-to-date information, best practices, and the future of data and data tech, join us at DataDecisionMakers.

You might even consider contributing an article of your own!

is 5g necessary for mobile phones