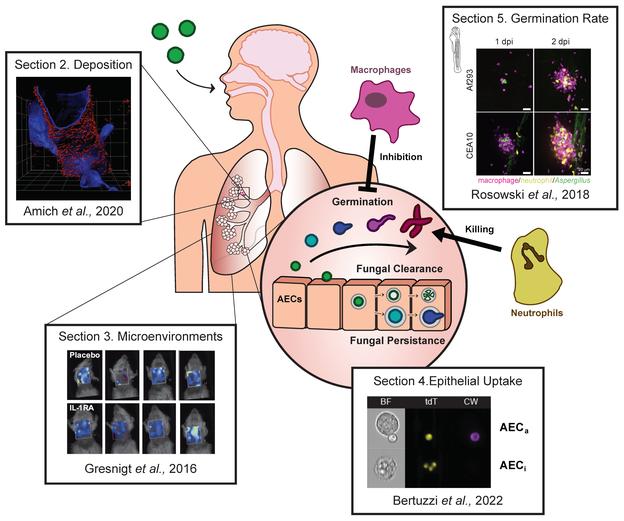 Aspergillus fumigatus is a ubiquitous filamentous fungus responsible for a broad range of human diseases, from allergic sinusitis or asthma to invasive and disseminated infection, through chronic, cavitary pneumonia1. Aspergillus is one of the four major fungal pathogens of clinical relevance worldwide2. As an example, the incidence of invasive aspergillosis is estimated to be 1.6/100,000 in Canada3. The majority of Aspergillus-associated diseases are due to Aspergillus fumigatus, which has expectedly been the most extensively studied species. 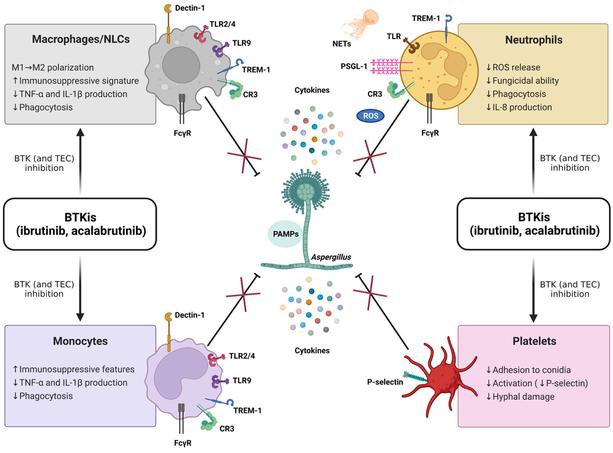 The principal inoculation route of Aspergillus is respiratory, and the organ mainly affected is hence the lung. In the lung, monocytes, alveolar macrophages, and alveolar epithelial cells represent the first line of antifungal defense. Any qualitative or quantitative alteration of these cellular populations can increase the risk of invasive aspergillosis. This is essentially encountered in neutropenia (mainly post-chemotherapy), myeloid hematologic malignancies, chronic granulomatous disease, and long-term use of immunosuppressives, as in organ transplantation4.

Treatment of aspergillosis mainly relies on systemic antifungals. The preferred molecule is voriconazole5,6, which interferes with the synthesis of membrane ergosterol in the fungus. This choice is mainly justified by the results of a seminal randomized controlled trial that demonstrated a global survival advantage favoring voriconazole compared with conventional amphotericin B7. Alternatives to voriconazole are isavuconazole and posaconazole, which were non-inferior to voriconazole in invasive mold infections8in immunocompromised subjects and invasive aspergillosis9. Echinocandins, the beta D glucan synthesis inhibitors, are active against Aspergillus fumigatus but lack clinical evidence to be recommended as first-line therapy. They are, however, sometimes used in refractory cases or combination therapy10.

The differences of response across antifungal agents can be partly explained by heterogeneous modes of action or varied safety and pharmacokinetic profiles. However, these differences in the clinical efficacy of these antifungal drugs remain only partially understood. One of the explanations is the potential of differential effect on innate immune response by these antifungal drugs. Previous work with voriconazole found evidence of a modulation of transcription and translation of specific immune-related genes such as Toll-Like Receptors11. However, no comparative in vitro studies between different antifungal agents have been performed. We, therefore, hypothesized that antifungal-induced modulation of the innate immune response to A. fumigatus could vary between these antifungal agents. This study explored the differences in immune-related transcriptomic activity in human monocytic cell lines challenged with A. fumigatus and exposed to major systemic antifungals as a first exploratory step.

what cell phone carriers will have the fold