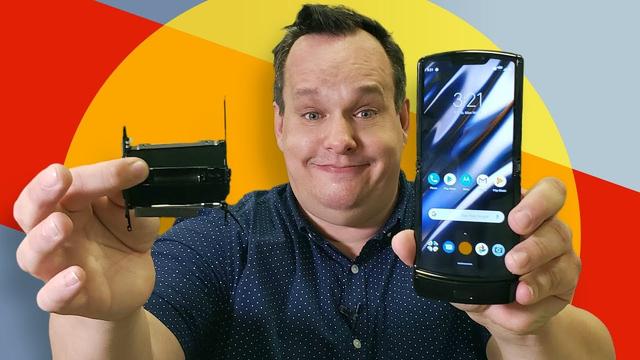 For my review of the latest Motorola Razr, which is now available, I tested the updated foldable phone for 10 days in September. Occasionally when I opened or closed the phone, an onlooker would react with disbelief. One woman working behind the register of a coffee shop's to-go window actually gathered her (masked and socially distanced) co-workers and asked me to show them how the Razr folded in half. When I demonstrated the screen folding like paper, her response was: "That is amazing. Where do I get one?"

And that's the "magic" of foldable phones at their core. They seemingly do the impossible by letting you take something rectangular and rigid and fold it into something smaller than a drink coaster. That magic comes from years of design, testing and revisions. And the engineers and designers who worked on the upcoming Motorola Razr know it's anything but magic to make a 6.2-inch phone fold in half.

But all that work can be easily overshadowed. The review units of 2019's Samsung Galaxy Fold raised the flag about how folding screens would work in the real world. A number of them had defects that let dust or other particles get underneath the screen and wreak havoc. Any concerns people had about folding displays were instantly amplified.

Now playing:Watch this: Motorola Razr: We got a peek at how the screen is tested5:15

Then in February 2020 after months of delays, Motorola released its Razr (2019) with a foldable screen and CNET's video team tested the display's durability. My colleague Chris Parker used a FoldBot and attempted to open and close the phone 100,000 times. After 27,000 folds the Razr (2019) wasn't able to be tested further. Reflecting on that test and how SquareTrade modified its FoldBot to handle the Razr, Parker concluded:

"Does [it] feel like a durable, resilient phone that will stand up to extended real-world use? To me it does."

These incidents might make you wonder if foldable screens are durable. And if so, how do we know? Jeff Snow, general manager of innovation products at Motorola, thinks it's natural to ask durability questions about foldable screens.

"The new thing about the phone is the fact that the screen folds open and you can light it up," said Snow. "People are not used to phones with those folding screens. So the questions in their minds are, 'Is it going to last?' 'How many times can I actually do that action?'"

Motorola claims the screen on its upcoming, updated Razr (2020) can be folded 200,000 times. To give you an idea how many times that is, you could open and close the phone 100 times a day for five years and still not hit that number.

To show me how the company determined and tested the number of times the upcoming Razr's screen could be folded, I visited a lab at Motorola in Chicago -- while wearing a mask and social distancing -- to meet Snow and Tom Gitzinger, director and principal engineer of innovation and architecture for Motorola. I got to see for myself how Motorola tests the screen on the upcoming Razr.

In a room that looks like a college black box theater are a number of lights all focused on a roughly 10-foot-wide machine. There is a camera on a tripod pointing at the machine which gives the entire space an odd television show vibe. On the top of the waist-high machine on their backs, are four Razr (2020) phones. The machine fully opens and closes all four phones at the same time over and over. 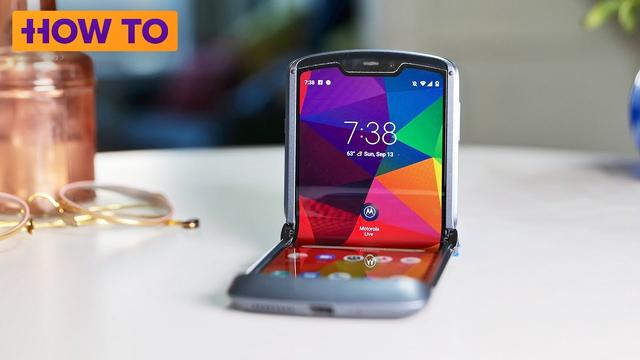 Throughout the design and manufacturing process, Motorola uses similar machines to test the folds on the Razr (2020). Unlike the Samsung Galaxy Z Flip, which is designed to be opened to a variety of positions, the Razr is built to either be fully open and flat or completely closed. And unlike the Foldbot, Motorola's machine uses a wire to open the Razrs perfectly flat and an arm to close them shut. The wire is thin enough to nestle between the two halves of the phone when it's closed.

To recreate those 200,000 folds in less than five years' time, the machine fully opens and closes the phones once every 4 seconds. There is a calming quality to hearing four phones shut closed every 4 seconds. It's like a soft-sounding metronome. It takes Motorola 10 days to fold each phone 200,000 times with this machine.

Over the past six months Motorola reached out to people who own the Razr (2019) to learn how they use the phone. According to Snow, Razr owners open and close their phones on average 40 times a day. And "super users" (the 99th percentile), average 100 times a day. Hence, Motorola designed the Razr (2020) to handle 200,000 folds.

"We're not changing the parameters of testing," said Snow. "But we want to make sure that we're understanding people and exceeding their expectations."

The screen and hinge allow the Razr to fold in half

The phone's "zero gap" design, screen and hinge allows the Razr to achieve a high level of screen durability. The newest Razr (2020) largely uses that same design as the Razr (2019) albeit with tweaks. In fact, if you want to learn more about the hinge take a look below at a video I made last year about its design and how it allows the Razr (2019) to fold flat.

The screen itself is made of five different layers and then sprayed with a hard coating. When the layers are combined the screen has a thickness of 355 microns (3.5 millimeters). To give you a sense of how thin that is, the Motorola Edge Plus uses a similar OLED panel stack for the curved edges of its screen which is three times the thickness of the Razr's display stack.

And it's not just the display that is folding in half. There are a number of connections including the four 5G antennas that have to traverse the hinge. And like other foldable phones, the battery in the Razr is actually two batteries, one on each end. Not only does this help with balance, but it adds another level of complexity as both have to connect through the Razr's hinge mechanism.

How Motorola addressed the squeak/creak

When I reviewed the Razr (2019) in February, it suffered from a squeak/creak. It was like a muffled crunching sound but loud. During my time with the updated Razr (2020), the squeak/creak was mostly absent until Friday -- my eighth day with the phone. And when it did squeak, it was a quieter sound, more like breaking in a pair of new leather boots. Gitzinger explained the noise by comparing it to a bag of potato chips.

"You can't possibly open a potato chip bag without making a noise. It's super thin. It's a lot more crunchy and crinkly than something like this [the foldable display]. But the same principle applies," said Gitzinger. "You've got this big, significant surface that moves around, and it's pushing air that creates some of the noises. We were able to eliminate other noises by putting in some old friction adhesives and tapes and surfaces to enable everything to slide past one another a bit more easily."

I asked a friend how they felt about the squeak/creak on the newer Razr (2020) and they said it didn't bother them. I guess when it comes to screen notches, foldable screen creases and now foldable phone squeaks, some people will get used to these things while others will be annoyed.

Only time will tell

With the improvements made, Motorola is confident about the retooled Razr's durability. In fact, the company runs 40 different lab checks to test both the design and quality of the phone during development and manufacturing.

That said, the true indicator for how durable the screen on the Razr (2020) or any foldable phone is time. Until then, just like magic, foldable phones require a bit of faith.

For more details make sure to check out my review of the 2020 Motorola Razr.

how many yimes will the razr phone fold