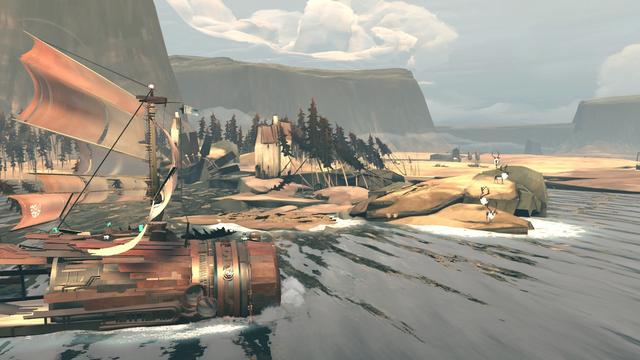 Where do you start when the world ends?

For “FAR: Changing Tides,” the answer is one marked by uncertainty as you’re plunged into the dark, watery depths of despair.

Fortunately, your waterlogged woes are only temporary as you quickly swim up to the surface and catch some fresh air. Even the sun’s bright and warm embrace, however, proves to be a temporary respite as the light reveals the ugly truth around you. There, surrounded by wrecked homes and flooded lands as far as the eye can see, you quickly realize just how alone you are in a ruined world bereft of any signs of human life.

It is amid this oppressing sense of isolation that you set off on your journey to the unknown. As you swim past floating chairs, rocking horses and other eerie remnants of civilization, you can’t help but ponder all sorts of questions in your head.

What led to all this destruction? Where did everybody go? Where should you go?

Just as you start to wonder whether you’ve been assigned to a life of aimlessly swimming around, however, you run across your ticket out of this situation. Inside a hangar that still remains standing, you find a massive ship beckoning for you to take hold of its reins and bring it out to sea.

Like the steamship in the first game, “FAR: Lone Sails,” the ship in Changing Tides is the main star of the show. The massive behemoth not only works as a form of transportation for the lone protagonist, it also serves as the foundation for everything you do in Changing Tides by driving the gameplay forward, no pun intended.

While it shares the steampunk-inspired sensibilities of the first ship, this game’s version has some notable differences that veteran players will spot.

One is that it floats on water as opposed to moving on land. This actually expands the gameplay as FAR: Changing Tides now incorporates underwater elements into its repertoire of puzzles to solve in addition to the surface activities that dominated the first game — something I consider to be a plus.

It’s something that leads to a charming dichotomy as you find yourself moving something akin to a gigantic mechanical beast with a little kid who looks simply tiny in comparison.

It’s also part of an ongoing theme of “bigger is better” as the sequel builds on the mechanics of FAR: Lone Sails while adding even more things to do. Operating the ship, for example, is more complicated this time around. Whereas you simply pressed a button in order to deploy or fold the sails from the first game, FAR: Changing Tides turns it into a more complicated multi-step process. First, you have to raise the mast, then climb said mast to grab a rope and then climb down to hook said rope to a locking mechanism. 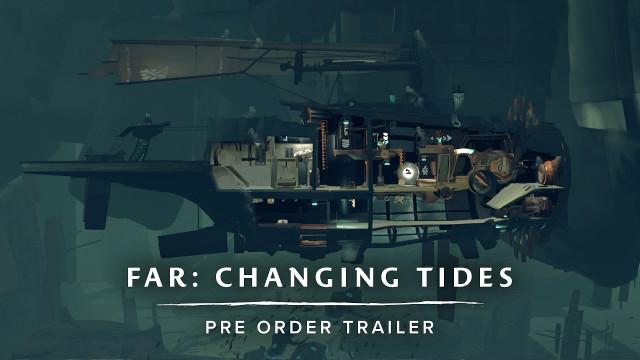 It’s a change that makes the process a lot more interactive, something that initially felt like a pretty neat change. Like the first game, however, FAR: Changing Tides will require you to lower and raise the sails multiple times as you come across obstacles along the way lest you want the ship to sustain damage. This makes going through all those steps a bit cumbersome, especially when you find yourself needing to quickly put your sails and mast down without much time to do so.

It doesn’t help that the larger ship also means you have a more limited view ahead of you. Even when using the game’s zoom-out feature, there will be occasions when you won’t have a lot of time to quickly lower your sails, especially if you’re inside the bowels of the ship as opposed to standing topside by the time you notice an obstacle.

Fortunately, you get a tool that can be used to fix a damaged mast so it’s not the end of the world — at least not in the figurative sense. In fact, in a gameplay decision likely done to reduce incidents of controllers being thrown at walls, failing to respond in time with any of the game’s many obstacles doesn’t end your exploits in FAR: Changing Tides. Instead, you’ll just have to do extra things in order to get back on track.

That being said, it can still be annoying having to go through stuff like this whole song and dance to get your sails up or down, especially when you have a bunch of other things to deal with while operating the ship. In this sense, maybe a simple one-button mechanic like the first game actually would have been better to help streamline things given all the other mechanics that you have to pay attention to.

Speaking of game mechanics, you can also adjust the positioning of your sail to take better advantage of wind gusts from different directions. This one is pretty neat as it adds another layer of interactivity to the game that does not feel like busywork.

Then again, operating the sails is just one part of FAR: Changing Tides gameplay.

It’s the end of the world as we know it

While the FAR: Changing Tides lets you come sail away while the wind blows, there will be times when Mother Nature just holds her breath and refuses to cooperate.

Well, this is when you transition away from hugging trees and using clean energy by tapping into your inner Joe Manchin and using coal or whatever other burnable fuel you can find to power your steam engine. Let’s just say that Tesla Superchargers apparently ain’t a thing in this post-apocalyptic world.

Operating the steam engine also requires some micromanaging, from scrounging up your fuel supply and setting up a steady flow to ensuring that you keep the engine running in an optimal state so it doesn’t overheat.

Later on, you gain the capability to dive underwater, adding another tool in your toolbox to deal with the many obstacles in your way. It certainly marks further expansion of the gameplay when compared to the first game.

While all these changes provide added diversity to the player experience, however, it can feel a bit like a job sometimes. Given all the responsibilities that you have to juggle, you might not help but feel like one of those solo street performers who entertain passersby and tourists by strumming a guitar, blowing on a harmonica and tapping drums with their feet at the same time.

Granted, the challenge is part of the fun in games like this. That being said, it can feel stressful and frustrating at times having to run around or go up and down while juggling all sorts of tasks like a circus monkey.

This makes breaks in the micromanaging segments a welcome change of pace.

Many times, you’ll have to pause your journey and get off the ship in order to investigate your surroundings. These segments essentially serve as puzzles that you will need to solve in order to open a path and let your ship move forward. These can range from simple mechanical tasks to tougher problems that will make you feel like you’ve let down your ancestors when you get stumped.

Other times, the game provides some zen breaks by just letting you appreciate the scenery passing by you without anything going on. This is when FAR: Changing Tides’ atmospheric sensibilities come into play as the desolate yet calm scenes intertwine with its melancholy and, at times, haunting musical score to remind you of your isolation. Play it on a big screen television late at night while everyone else is asleep and it’s easy to become fully immersed in the dystopian quiet unfolding in front of you.

For some, it’s an experience that might feel slow and boring at times. For others, it’s an opportunity to decompress from a busy day and think about things that you have on your mind. Post-apocalyptic stories might seem overdone in this day and age. But given all the destruction and suffering occurring right now in places such as Ukraine, it’s easy to be reminded that even during a time when humans should be more enlightened, we’re still just one bad decision away from mutually assured destruction.

Admittedly, a lot of the sense of newness from FAR: Changing Tides disappears if you’ve already played the first game. This is essentially the same game after all except bigger and with more things to do. At the same time, I still recommend playing FAR: Lone Sails first if you can. Doing so gives your journey in Changing Tides far more impact — something that might not be noticeable at first but ultimately makes its mark when you least expect it.

Like its predecessor, FAR: Changing Tides serves up a poignant journey through a lonely apocalyptic landscape with a bigger ship, a bigger world and a bigger scope overall. At the same time, it still retains that same claustrophobic feel and charm while serving up all sorts of environmental puzzles for you to solve. The extra mechanics can admittedly be frustrating to deal with at times as you find yourself juggling many things at once and it also doesn’t quite have the same sense of newness for veterans of the first game. Overall, however, FAR: Changing Tides is the kind of game that makes you wonder and also makes you think, which is a credit to the compelling atmosphere that it deftly provides.

Jason Hidalgo covers business and technology for the Reno Gazette Journal, and also reviews the latest video games. Follow him on Twitter @jasonhidalgo. Like this content? Support local journalism with an RGJ digital subscription.

can a folding phone ever have a tougher screen