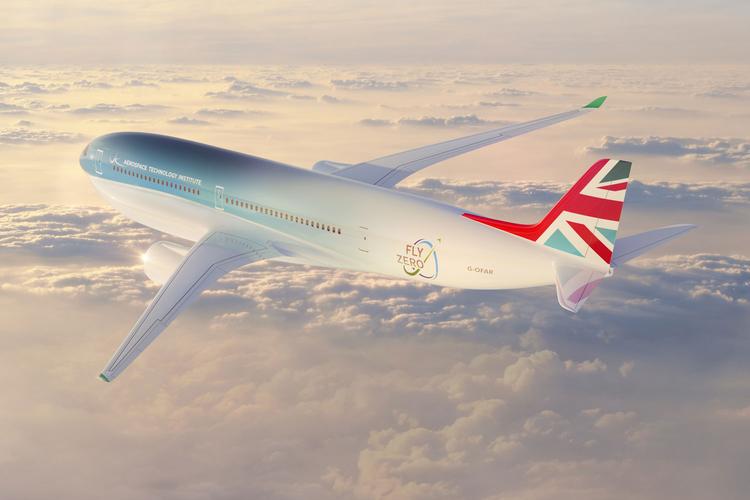 The three concepts cover the regional, narrowbody and mid-size market sectors. Together they form part of a study that targets zero-carbon emission commercial air travel by the end of the decade. The project’s findings identified green hydrogen as the most viable zero-carbon emission fuel, and included recommendations on how key technology challenges can be overcome, plus market and economic reports and a sustainability assessment.

The final concept report shows that hydrogen aircraft can be competitive “on a mission energy basis with a sustainable aviation fuel (SAF) powered aircraft using consistent 2030 technology,” the ATI says. The FlyZero studies say that hydrogen aircraft have the potential to address 100% of short-haul and 93% of existing scheduled long-haul flights.

The report notes that aircraft-level design trades when using hydrogen fuel were demonstrated to be fundamentally different from a kerosene-powered aircraft. That is primarily down to the high specific energy of hydrogen, “meaning much less hydrogen by weight is required” compared to conventional jet fuel. “This may drive different technology priorities,” the ATI says. “Hydrogen aircraft will require more integration than kerosene aircraft between the propulsion system and the airframe, as the fuel phase change from liquid to gas and associated energy management are novel challenges for commercial aircraft design,” the ATI says.

In all, the FlyZero project identified 13 technology “bricks” that it believes are fundamental to realizing hydrogen-fueled aviation. Of these, six are “hydrogen aircraft” bricks covering revolutionary aerospace technologies including gas turbines that can run on hydrogen; cryogenic fuel and storage systems; fuel cells; thermal management; electrical propulsion systems and aerodynamic structures.

The ATI says projections from the technology research were used directly in the design of the concepts and an iterative design loop was completed multiple times during the project. “The concepts therefore illustrate what could be achieved by an aircraft if the technology levels identified in each of the roadmaps are realized,” the report says.

Referenced against an ATR 72-600, the FlyZero regional aircraft concept—dubbed FZR-1E—targeted the feasibility of a fuel cell-powered aircraft and was included because this segment “is considered by many to be the most likely initial entry point of a hydrogen aircraft,” the report says. At the heart of the 800 nm-range, 325-kt. cruise speed-capable design is a fuel cell system coupled with an electric powertrain driving six sets of 7.5 ft.-dia. propellers.

The fuel cell was sized for take-off power needs, driven by field length. Fuel cell operating efficiency also improves significantly as the power demand is reduced relative to peak power, the report says. “Up to a point, the weight penalty for over-sizing the fuel cell stack is offset by the reduced weight of the thermal management system and reduced fuel consumption. Therefore, the system take-off power to cruise power ratio will differ from a normal combustion aircraft and the key to this is understanding how to manage transient heat loads at the extremes of the operating envelope,” the report says.

Fuel cells were moved from their original location behind the cabin to an unpressurized zone beneath the aft cabin floor for space, weight and balance reasons. The addition of thermal, air and water management systems also requires an extension of the landing gear fairings to create sufficient space. Although the wider fuselage helps make hydrogen storage more efficient, the report notes that the concept uses vacuum-insulated tanks “as the surface-area-to-volume ratio meant that the required thickness of foam insulation became difficult to accommodate, particularly for the aft tank.”

The thermal management system, which includes heat exchangers in the nacelles for the electrical and fuel cell thermal management system, is described as a key weight driver due to the exhaust temperature of around 80C produced by the fuel cells. Although the fuel cells only emit water as a byproduct mixture of liquid and vapor, the ATI adds that a water storage system was added. This was done to avoid the potential for creating precipitation during initial climb or leaving liquid water on the runway. Water is therefore exhausted later during flight or used by on-board systems. 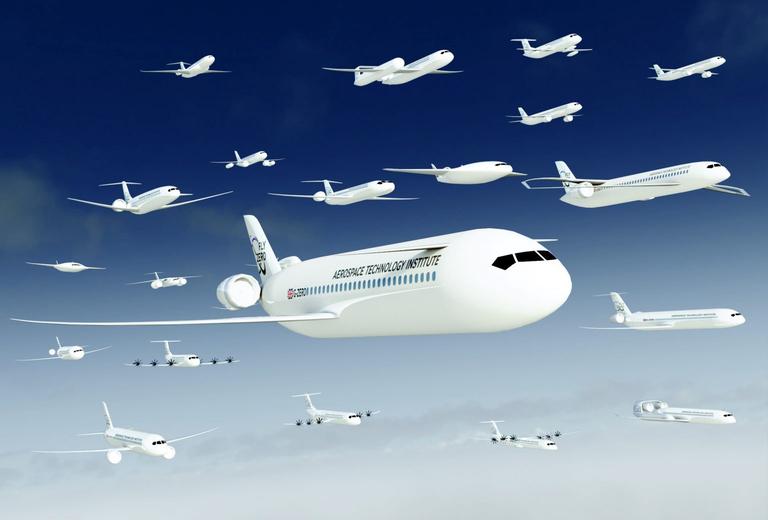 Carrying 75 passengers to conform with U.S. scope clause regulations, the study regional aircraft is dimensionally similar to the 89-ft.-long ATR 72 with a slightly wider fuselage and a 13-ft.-wider wingspan. In performance terms, the aircraft is close to both the current ATR 72 and that of a projected improved 2030 version, with marginally longer take-off and landing lengths and 25,000 ft. initial cruise altitude capability. The FZR-1E would have a higher cruise speed capability of 325 KTAS (knots true airspeed) compared to 266 KTAS for the current ATR.

The narrowbody concept, dubbed FZN-1E, is referenced against an Airbus A320neo. Targeted at a design range of 2,400 nm., and with seating for 180 in economy class, the concept incorporates twin hydrogen-burning turbofans mounted beneath a T-tail. The design includes a 129-ft. span, a high-aspect-ratio wing and a tapering fuselage shaped for natural laminar flow, which increases in width towards the tail where the fuel tanks are stored. The increasing width aft enables the bulk of the cabin to be laid out in a twin-aisle configuration, and because it is beneficial to be wider at the rear for the fuel tanks, the variable cross-section could “encourage natural laminar flow” to reduce drag, the report says.

Key design features include nose-mounted foreplanes to address concerns over the movement of the center of gravity (CG) during different flight and loading conditions. “The canard provides improved longitudinal trim authority, allowing a wider CG range and improved pitch authority for rotation. It can also be used in combination with the tailplane to minimize aircraft trim drag through the wide range of CG changes in flight,” the report says.

With all the fuel stored in the fuselage, the wings are dry and incorporate Boeing 777X-style folding tips to enable the FZN-1E to comply with span limits for the A320 size category. By using a dry wing, the ATI designers say the structure can be optimized for wing bending moment and aeroelastic purposes. The flap mechanisms can also be located within the wing structure rather than requiring external fairings, thereby reducing drag.

Despite the fuselage being more than 23 ft. longer and around 3 ft. wider than the A320, the higher efficiency of the wing, propulsion system and reduced overall drag give the concept almost identical performance in terms of field length, cruise speed and altitude capability. On a typical 1,000-nm. length round trip, designers say the hydrogen-fueled aircraft would only incur a 1.3% fuel consumption penalty for “tankering”—the practice of carrying more fuel than needed—versus 6.3% for an A320neo. “This may be significant for the early stages of hydrogen operation when fuel infrastructure is limited,” the report notes.

The midsize design, referenced against a Boeing 767-200ER, differs in some detail from the concept disclosed in December and is sized to carry 280 passengers on non-stop flights up to 5,250 nm. “A benefit of the midsize configuration is that it would allow an aircraft to be introduced more harmoniously into the ‘middle of the market’ currently served by older aircraft designs or larger aircraft operating below their design points. The design range was set at 5750 nm, based on a target operational range of 5250 nm, to enable flights to all major global destinations with two flights and one stop,” the ATI says.

Refined from the initial concept, which was characterized by a distinctively bulged forward fuselage with “cheek” cryogenic fuel tanks either side of the lower lobe, the FZM-1G design now encloses the “delta” tanks in an unpressurized zone ahead of the wing in a large wing-to-body fairing. The bulk of the hydrogen remains stored in its original location in an aft fuselage-mounted fuel tank.

Like the narrowbody concept, the midsize design includes a dry wing with the same potential aeroelastic and drag benefits, as well as a wider fuselage relative to the reference aircraft. The study also found that for both market sector concepts—with the same thrust requirement—a smaller gas turbine led to an overall lower mission fuel burn, even through the specific fuel consumption (SFC) of the engine was worse. This is the reverse of the usual way in which engine size trades for a conventional Jet A-1-fueled aircraft.

“The reason for this is that kerosene or SAF is relatively heavy compared to hydrogen as a fuel, and therefore an increase in engine efficiency or SFC gives a significant fuel mass reduction at the aircraft level, which outweighs any increase in engine weight from increasing the engine diameter. With hydrogen the reduction in fuel mass is relatively small so a smaller, lighter engine is the better option overall,” the report says. “FlyZero noise analysis suggests it is possible to achieve lower levels of noise for a hydrogen aircraft than the project noise requirements, which are more stringent than the current regulations,” the report adds.

In performance terms, the hydrogen aircraft is expected to have a slightly improved take-off and initial cruise altitude capability, as well as almost 500 nm. more range and higher cruise speed. Approach speed would be slightly higher and landing length longer, however.

The report notes that in addition to the concepts themselves, several other critical areas need to be better understood in parallel. These include green hydrogen production and infrastructure, and the climate change impact of contrails. Overall, however, it concludes that FlyZero “has shown sufficient promise that research into hydrogen aircraft should be pursued and accelerated.”

It cautions that hydrogen alone will not be able to achieve the target of net-zero carbon emissions by 2050. Continued investments are required to accelerate SAF production and the development of synthetic SAF. “There is no silver bullet to solve the challenge of de-carbonizing aviation,” the report says.