Huawei has officially unveiled its third-gen foldable phone at an online launch event. The Mate X2, which follows the original Mate X and the durable Mate Xs, is a 5G handset that has a lot of similarities with the Samsung Galaxy Fold. Huawei has refreshed the design, with the device now opening from the inside rather than the outside. Huawei claims to have perfected its hinge, meaning the phone now folds with an "imperceptible" gap.

The Mate X2's larger inner screen measures 8 inches with a resolution of 2480 x 2200, whereas the outer screen packs 6.45 inches of space with a 2700 x 1160 resolution. Both displays are OLED and boast 90Hz refresh rates that should be great for gaming. In terms of materials, it has pared steel with a carbon fiber chassis to keep the device tough yet light. 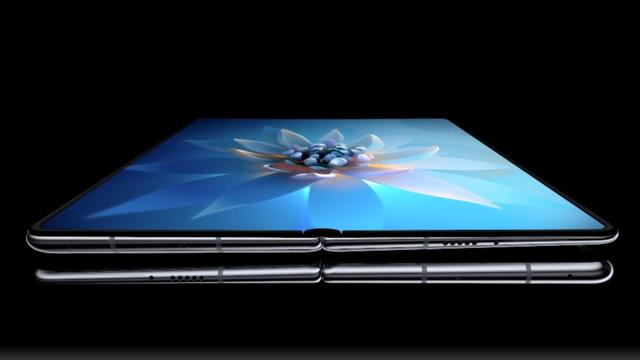 Of course, Huawei is still grappling with its fatal flaw: A lack of Google apps. Huawei says the phone will run on EMUI 11.0 based on Android 10, adding in its launch livestream that it will be among its first phones to be updated to its HarmonyOS, beginning in April.

iThis content is not available due to your privacy preferences. Update your settings here, then reload the page to see it.

Elsewhere, the Mate X2 contains Huawei's high-end Kirin 9000 chipset — compared to the 990 chip on the Mate Xs — which just so happens to be its last in-house, flagship processor. Huawei previously said the Mate 40 would be the final phone to get the Kirin 9000 due to US trade sanctions that limit American suppliers from selling components to the company. Huawei has combined that with 8GB of RAM and a 4,400mAh battery, with fast charging at up to 55W.

The new phone's Leica quad camera array includes a 50-megapixel wide-angle main camera (a step up, at least on paper, from the 40-megapixel lens on the Xs), a 12-megapixel telephoto camera with a 3x optical zoom, and an 8-megapixel “SuperZoom” with a 10x optical zoom. There's also a selfie camera on the outside that boasts a 16-megapixel lens. The Mate X2 comes in four colors: Traditional black and white, as well as crystal blue and crystal pink.

As expected, the foldable comes at a steep price. In China, where it goes on sale on February 25th, the 256GB model will cost 17,999 yuan (around $2,785), while the 512GB version will be 18,999 yuan (around $2,940). There's currently no word on whether it will launch in other markets, including the US. That price is considerably higher than the $2,000 Galaxy Fold 2, especially when you take into account those software setbacks.