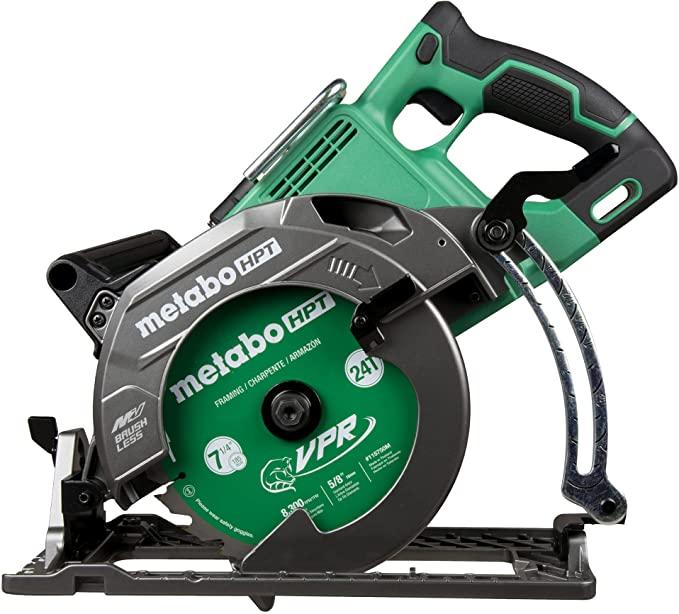 The Takeaway: If you’ve got a big construction project planned, you would do well to consider the new breed of cordless circular saw known as a rear-handle type. And the best such saw we’ve tested is the 36-volt Metabo-HPT C3607DWA.

This kind of saw is so named because its trigger handle is to the rear of the motor housing, not above it, as it is with most saws. Its blade is on the left side of the motor, giving right-hand users a better view of cutline in most cases, such as when crosscutting framing lumber with the saw blade on the right side of the cutline. These new circular saws look a lot like the corded worm-gear circular saw developed decades ago and epitomized by Skilsaw’s version. Yet they are very different.

Clearly, Metabo-HPT’s engineers are familiar with the two aspects of the traditional corded worm-gear saw that have endeared the tool to generations of carpenters. One is its relentless cutting power, and the other is the position of its rear handle, which allows the saw to hang comfortably in your hand. The handle’s location orients the saw in a ready-to-cut position when moving vertically or along the face of a sloping piece of lumber. It’s not unusual for carpenters to lift the edge of a wide piece of lumber, like a floor joist, when crosscutting it. The downward slope this produces helps the saw slide as it cuts. 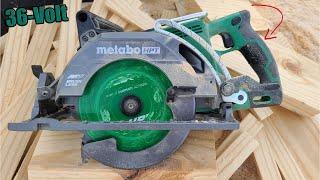 Those two familiar attributes are designed into the C3607DWA, and to anyone who has ever handled a worm gear circular saw, this Metabo-HPT feels instantly familiar. It hangs comfortably from your hand and positions quickly on the cutline. Like the corded worm-gear saw, this cordless version cuts with a vengeance.

In testing the saw’s power, we selected pressure-treated southern yellow pine 4 x 6. We made crosscuts (across the grain) and rip cuts (with the grain) at the saw blade’s full depth of 2 7⁄16 inches. No problems there. Then we pivoted the saw’s shoe to 45 degrees and made crosscuts, rips, and compound angle cuts through the test material. It’s been our experience that today’s thin-kerf blades deflect more than old-fashioned full-thickness circular saw blades in these bevel cuts. In many cases, this blade deflection can stop the saw’s progress. We suspect the cause is that the blade makes more contact with the late-wood growth rings when the blade is tipped this way (late-wood growth rings are the dark-colored ones that you see when you look at tree stump or the end of a piece of lumber). Without sufficient power to see the cut through, the saw will labor as the blade deflects under the load.

Our verdict: The Metabo-HPT circular saw did just as well cutting full-depth bevels as it did full-depth rips and crosscuts. It’s a powerhouse.

An important difference between this saw and the traditional corded worm-gear variety is weight. Equipped with the 4-Ah battery that comes with it, the C3607DWA weighs only 10.6 pounds. My corded Skilsaw Mag 77 worm-gear saw weighs a whopping 14.4. Yes, that old 13-amp Skilsaw is like a portable sawmill, but it can be tiring to use.

Another major differentiating feature is that this Metabo-HPT saw can operate on its battery or with an adapter that plugs into 120-volt power. The adapter consists of a step-down transformer and rectifier that produces the 36-volt direct current necessary to operate the saw. The accessory is expensive, but if you have a long day’s work ahead of you and you suspect that you’ll run out of battery charge, it’s worth considering. The manufacturer rates the saw as being able to make 500 crosscuts in 2 x 4 lumber per charge of its 4-Ah battery. We couldn’t come close to verifying that in our test. What we can say is that after some very strenuous full-blade-depth testing in pressure-treated lumber, the saw showed no signs of slowing down. We think it’s reasonable to expect at least several hours of typical residential construction cutting with the saw.

The saw is long on substance and short on fancy tricks. There’s no laser line, work light, nor Bluetooth doodad on this power tool. What you get is a solidly built circular saw with a fold-down rafter hookmounted to the motor housing. Manufacturers call it such because carpenters hook the saw onto a rafter, or any framing member, when they’re not cutting. You can use it for that or suspend it off the end of a sawhorse, too. Either way, it keeps the saw safely in place and ready to grab when you’re preparing to cut. We also found that the saw’s smooth magnesium shoe makes the tool slide easily over a rough piece of lumber. That shoe’s depth and bevel settings are easy to adjust.

The saw has several other thoughtful details that may escape notice at first glance. For example, it has a well-located and comfortably large spindle lock rod tucked in ahead of the motor housing. Press on the end of the rod to lock the motor spindle (also called the motor shaft or arbor) and prevent it from turning. Some background may be helpful in understanding this feature. It’s difficult to remove an overly-tightened blade nut from the motor spindle. The force from the wrench turns the spindle and prevents you from loosening the nut. Anybody who has ever struggled with this typically slides a nail between the blade’s teeth and the nail jambs up against the shoe; other times you use a pair of locking pliers fastened to the blade to provide the same jambing action. This method of preventing the blade and spindle from turning is only partially effective. If the nail (or pliers) slip, you can end up smashing your knuckles as the wrench makes contact with the blade housing. The lock simplifies matters. Press in on it, and the wrench’s full force is applied to the nut and turns it off, rather than spinning the nut, the blade, and the motor spindle.

We also like the brake that quickly stops the blade the moment you let off the trigger—this is as much a safety feature as it is a productivity aid in that it helps you to quickly reposition the saw between cuts. The rubber overmold layer on the rear trigger handle provides the right amount of grip, and the handle’s shape and angle all combine to make the saw easy to push through a cut.

When you add these features up—power, handling, adaptability, ease of use, handle comfort, and features that are easy to adjust—you have a circular saw designed and built to make the hard work of carpentry a little easier, more predictable, faster, and safer.