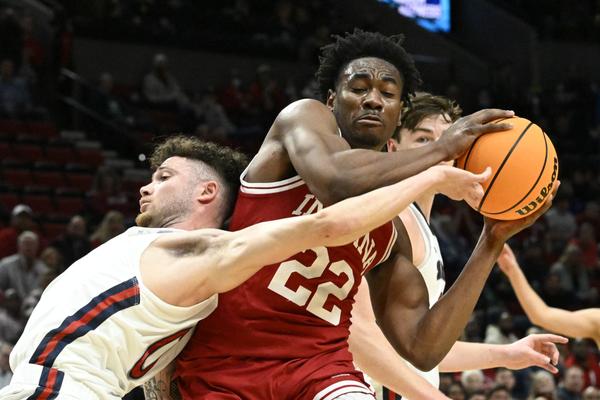 My Two Cents: Rest Vs. Rust Also Was No-Contest in Indiana-Saint Mary's Debacle

The first-year Indiana basketball coach was never going to complain about having to play five games in eight days, about having to play an extra NCAA Tournament game or having to travel across country with major transportation screw-ups, and having no time to prepare for first-round opponent Saint Mary's.

But when it was all said and done, the Gaels had an 82-53 victory — the worst loss for Indiana in 101 NCAA Tournament games.

There were no excuses from Woodson. But Saint Mary's coach Randy Bennett, who's team hadn't played in nine days and was well-rested and well-prepared, was glad to weigh in on the topic, and he was absolutely sure that Indiana's schedule and travel woes had caught up with them.

In the battle of Rest vs. Rust, rest kicked butt. As usual.

"I know Indiana won't use this as an excuse, but the situation they had is tough,'' said long-time Saint Mary's coach Randy Bennett. "They were just playing Wyoming (on Tuesday night), and they're trying to get that win. They just finished their conference tournament. They really didn't have any chance to prepare for us.

"We played well, but those two teams are more even than that. They just had no chance. They're flying (Wednesday). I don't know, maybe be a walk-through at one time with their team. It's hard to guard us if you can't get a prep on us, and then we were able to get a prep on them. So if you're wondering if rest versus playing however many games they did in a short amount of time and flying across the country, there's no question it's an advantage to be resting.''

And let's be clear about that, too. Indiana's fatigue is not an excuse — it's a fact. Was it a factor in the game? Of course it was. Was it the only factor? Absolutely not.

First and foremost, Saint Mary's is a very good team. They're quick, they can blow by you offensively and they guard. The Gaels also have a bunch of veterans, and they weren't the least bit intimidated by playing Indiana. And Indiana still can't shoot from the perimeter,

Saint Mary's was the better team and, outside of Indiana forward Trayce Jackson-Davis, they were far superior at every other position.

"You've still got to do it. You've still got to play well, and there's a lot of pressure here in the first game of the NCAA Tournament,'' Bennett said. "So we did all that, but you could see it on their faces. They were gassed, like probably at halftime. They got in too big a hole. Anyhow, let's set the record straight on that. That's how that works. We were in the better spot going into that game as far as the situation to be in.''

Indiana played five games in eight days, and they were all intense, with every one of them basically must-win situations for postseason survival. During those eight days, Saint Mary's was resting up and fine-tuning their team, was is now 26-7, with two of those losses to No. 1 Gonzaga.

The 29-point loss was tough to swallow, but what we have to remember was that this season was going to end with a loss anyway. There's only one of these 68 NCAA Tournament teams that gets to smile at the end.

In this case, the road ended here in Portland. And the flight home was uneventful to the flight out.

The Hoosiers finished the season under Mike Woodson with a 21-14 record. Along the way, there were wins against Purdue and Michigan, snapping nine-game losing streaks to both schools, There were also wins over NCAA Tournament teams Illinois, Ohio State and Notre Dame. 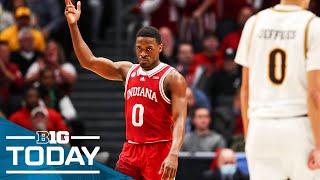 There was a lot of heartbreak, too, a lot of last-second losses that derailed the season. But there's this, at the end: If the only answer is yes or no, was this a successful season?

That's a yes. An emphatic yes for me.

Could it have been better? Sure. But this was the most enjoyable Indiana basketball season probably since 2013. I get that Indiana won a Big Ten title in 2016, but there was a lot Tom Crean angst that put a dark cloud over that season.

What Mike Woodson's arrival back to his alma mater gives us is a pathway to hope. We had no hope that Indiana would get back among the Big Ten's elite when Archie Miller was coaching. None.

We have hope now.

It's not going to happen overnight, but what Indiana proved this season is that they aren't far offf. They have a great recruiting class coming in, with three guys — Jalen Hood-Schifino, Kaleb Banks and C.J. Gunn — who should be able to help immediately.

It's going to be a busy offseason. All 13 players on the Indiana roster now do have at least one year of eligibility remaining because of last year's COVID situation. Add the three newcomers, and something has to give.

But just because eligibility remains, that doesn't mean there won't be a lot of movement. Players will have decisions to make, but so will Woodson and his staff. There may be some players who won't be asked to return.

We'll get to that down the road, of course, because today is not the day to break all of that down. All we know is this. We've taken the first step with Mike Woodson, and it was a good one.

And we'll look forward to the next one. As always, November can't get here soon enough.

"It was a great run for our ball club this season getting back into the Big Dance, and now we've got to build on it for future,'' Woodson said. "That's what it's all about at this point. It was great to come back, man. My AD, Scott Dolson, giving me an opportunity to take this job on meant a great deal to me and my family and all the people that have supported me all these years at Indiana and just around the country.

"It was great, but it was all about these players. They made a commitment to let me coach them, and that meant more to me than anything because going in blindly like I did, that wasn't the case. It was a lot of damage control that had to be done to get these guys on board, to give me an opportunity. So I have nothing but love for the 17 players that I coached this season because they put this program back in the fold in terms of being in the Big Dance. That's what it's about. You've got to give yourself an opportunity. You've got to get there and give yourself a chance, and I thought they did that for us this season.''

What really helped leave good memories of this 2021-22 season was all the good things we've seen in the past two weeks. We saw Trayce Jackson-Davis play like an All-American the last few weeks after a month-long slump. He's been terrific lately, and I truly hope he hasn't played his last season at Indiana.

We saw Xavier Johnson turn into a quality Big Ten point guard, which is saying something since Indiana ''fans'' were booing him off the court in December. He's been really good, too.

We've seen glimpses of potential in sophomores Jordan Geronimo and Trey Galloway, and have a lot of optimism in how good freshman Tamar Bates can be going forward.

There's some stuff to work on, of course, but there is at least hope for the future. Making a statement in the Big Ten Tournament was big, as was getting a taste of the NCAA Tournament for a few days.

And that's a wonderful thing. You can't run until you walk, and they've done that now.

"It's huge (getting the tournament experience),'' Woodson said. "Moving forward, it's big time because it gives them an opportunity to taste it and feel what it's really like. If you never get an opportunity to taste March Madness, man, it's not a good feeling, I'll tell you that. I went a few years where I didn't make the Big Dance, and it's a long summer.

"Now these guys, they have a feel. They got this summer to go and work on things that can make them better as ballplayer and make us better as a team when they come back. So it's a lot of positives making the Big Dance this year for our program.''