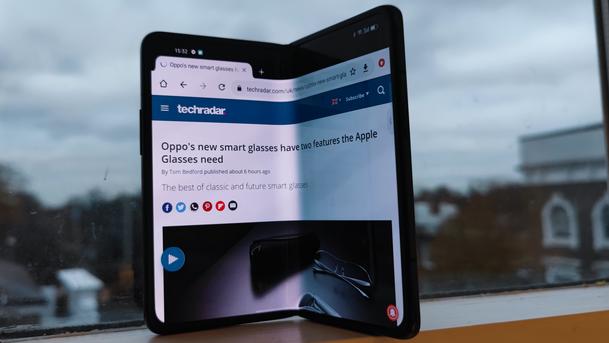 Well, another big Chinese tech company has thrown its hat into the foldable-phone ring. The Oppo Find N is the first flexing handset from the popular brand, launched at the company's annual Inno Day where it shows off its latest developments.

This new Oppo phone is a book-style folder, like the Samsung Galaxy Z Fold 3, with a big screen when the device is unfolded, and a tiny outer display for when the mobile is closed.

But arriving three generations after Samsung's foldable, Oppo clearly took inspiration from the legacy Fold family – in particular, it fixed what was so annoying about using Samsung's device.

We've taken the Oppo Find N out for a whirl, and we immediately enjoyed using it more than the Samsung Galaxy Z Fold 3 – mainly because it solved a key issue with that device.

Sadly, this phone will only go on sale in China, but hopefully a Find N2 will come out globally in the future.

We've been testing the Oppo Find N the best we could, but in full disclosure, we've been unable to use it as our main smartphone because the Chinese software doesn't include the Google Play store. We've been able to side-install the majority of our main apps via the web, but due to the lack of Google Drive, we're unable to use WhatsApp (as messages must be backed up from the cloud).

That rules out all other Google apps too, including Maps, which is something we wish we'd considered before getting lost in an unfamiliar town in the middle of England.

The outer screen is, for want of a better word, cute – at only 5.49 inches across it's very compact, which might appeal to people who don't like giant phones. We found it fine for quickly checking messages or browsing social media.

Despite the small frame, the phone isn't exactly dainty when held in this way. The body folds into itself, so it's pretty thick. You can open it up to see the bigger 7.1-inch display and then its thickness comparable to your average phone - but also sized like a mini-tablet.

We found this bigger display much more useful for typing, as the keyboard was stretched over a bigger area, and if we were using the phone for a longer period of time it was pleasant to view this larger display. 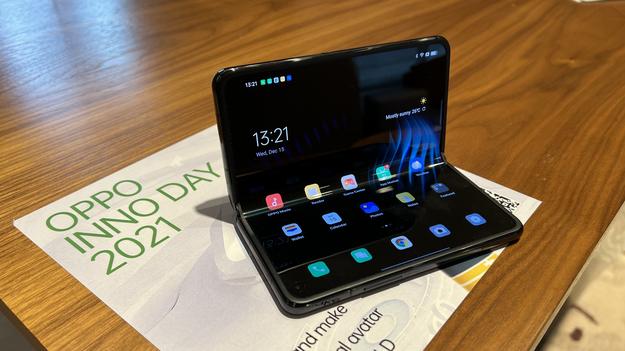 One issue, though, comes from the fact we side-loaded lots of our apps from the internet using APKs. This means the apps aren't optimized for the display size or folding nature, so most apps we used didn't sit perfectly.

For example, when we tried to watch a movie or TV using Disney Plus on the folded-out screen, rotating the display didn't change the orientation of the video. Plus, the picture didn't extend to the edges of the display. The viewable area was no bigger than it would have been on the outer display, or on any other smartphone.

Similarly, while the Oppo Find N is meant to have gestures that let you easily toggle between split-screen or window-in-window views, most of the apps we tried this on weren't compatible.

We can imagine this system works as intended in China, and whatever streaming apps are popular there probably look fantastic on the Find N. However, until a version of the phone is put out with different software, it's hard for us to fully test the normal uses of the mobile.

Let's blitz through some other specs of the phone quickly. There's a 4,500mAh battery, and we found the device lasted over a day between charges – we imagine using the smaller screen as our primary one saved some power. The 33W wired charging isn't exactly fast though, nor is the 15W wireless or 10W reverse wireless powering, but the latter two are nice extras at least.

The chipset is the Snapdragon 888, the most powerful Android chipset of 2021, paired with 12GB RAM and 256GB storage. That makes it pretty snappy, and we played a few games on the big screen which felt fluid. We were particularly impressed by how, when we switched screens, the phone wouldn't lag or stutter and you could jump into the same app on the second display.

Regarding the cameras, there's a 50MP main, 50MP ultra-wide and 13MP telephoto snapper on the rear – if you know Oppo, you know its phones are great for photography, and the Find N is no exception.

For selfies, you've got the same 32MP selfie snapper in a punch-hole in the outer and inner displays, but weirdly, we found portraits taken on the camera embedded in the main display were much better looking than those taken on the smaller screen.

You see, Samsung really hasn't cracked the screen crease issue. When you're using the phone, there's a very noticeable bump across the middle of the display where it folds.

Depending on what you're doing, this can be a slight nuisance or a real issue, and it's one of the main reasons we'd recommend avoiding the early-gen Samsung foldables.

So what about the Oppo Find N? Well, this is that 'main foldable phone problem' we mentioned in the introduction.

There's no screen crease on Oppo's foldable phone – you can run your finger over the display without being able to work out where it joins together. It's a startlingly smooth experience for people who've used the Galaxy Fold, and it makes swiping between menus or playing games just a bit more pleasant.

Admittedly 'screen crease' won't sound like a huge concern for people who've never used a foldable phone before, but it affects your everyday experience with the phone.

The first few generations of foldable phones were (understandably) riddled with problems that are unique to this new design, like hinge durability issues and a lack of bespoke software, as well as this crease issue.

However, now that these flexing mobiles have been around a while, it's about time that companies found ways to solve these issues – Oppo has clearly done this with the Find N, and now Samsung needs to follow suit.

how does the samsung folding phone work