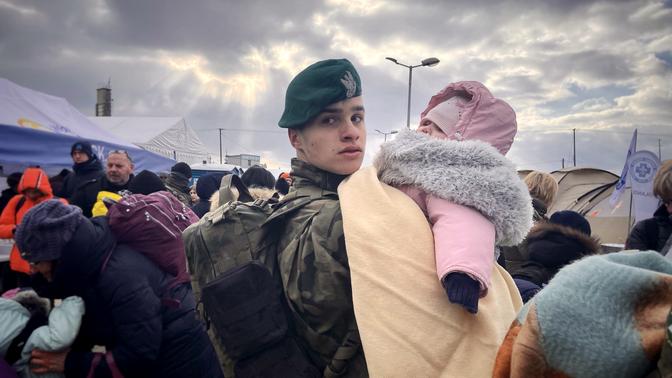 Refugees from other wars see themselves in fleeing Ukrainians

Nida al-Jabourin (ph) has been watching the news out of Ukraine, the scenes of families pouring over the border - more than 3 million since the Russian invasion began three weeks and one day ago.

NIDA AL-JABOURIN: I see myself in these kids. I went through this exact fear and pain. I know how that feels. And I really hate to see other family, like, leaving home, maybe, like, leaving part of their hearts in there.

KELLY: Nida (ph) fled her home in Syria when she was just 13, so she has an idea of what's next for Ukrainian kids whose lives have changed forever in an instant.

KELLY: Nida is one of three people I talked with this week about the experience of being a refugee - what it feels like, how it shapes you.

KELLY: He fled Vietnam when he was 4. He's now an author and professor.

KELLY: We heard from her a moment ago. She left Syria as a seventh grader.

MAIWAND SERI: My first name is Maiwand (ph), and my last name is Seri (ph).

KELLY: A translator who'd worked for U.S. forces. He flew out of Kabul with his wife and son hours before the Afghan government fell to the Taliban. He loved his life there, he told me.

SERI: My life was simple, beautiful life. I had a beautiful family.

KELLY: Simple is the same word Nida used to describe her life in Syria.

AL-JABOURIN: It was very simple. Me, my parents and my siblings lived outside of, like, a village surrounded by, like, olive trees. We would walk to school every day. It was very, like, simple, peaceful life.

KELLY: Viet doesn't remember much about his life in Vietnam, but there are things that nearly 50 years later, stay with him.

NGUYEN: I'm not even sure that they're real, but the fragments I have are all actually mostly related to war, like meeting an American soldier, bouncing on his knee or thinking I've seen a tank in the streets with North Vietnamese soldiers on it because our town was the first one captured in the final invasion of 1975.

KELLY: For many Ukrainians right now, the decision to flee has been abrupt. One day you're safe, the next you're not. We heard that sudden urgency in the stories of each of the people we talked to, including Maiwand (ph).

Tell me about the day that you left.

SERI: It was very chaotic because before leaving Afghanistan, I was - I did not want to actually come to America because I always thought that, you know, life is not easy, especially starting everything from scratch. But provinces were falling and areas were taken over by the Taliban. So me and my family decided that I could be an easy target because I worked so long for the American forces. But we did not know that it's going to happen so fast. Even when I got to the airport, I did not know that after 24 hours, everything will collapse.

KELLY: So did you know when you left that you wouldn't be going back, at least for a long time?

KELLY: And you saw that where - on a TV in the airport?

SERI: Yes, at the airport. I was waiting to get to another flight from Doha to D.C. And at the airport, I did not have a phone to call back my parents, and I panicked. I borrowed someone else's phone, and I called them. And I said, what's going on? I want to come back. I don't want to go with my flight to - all the way to D.C. And my parents said that, don't worry, for right now, nothing is bad. And your returning back to Kabul is not going to affect anything, so the better option would be to go ahead and go to America.

KELLY: So your instinct was, I should go home. I got to get back to Kabul. And your parents were saying, no. Go, go, go. Be safe. 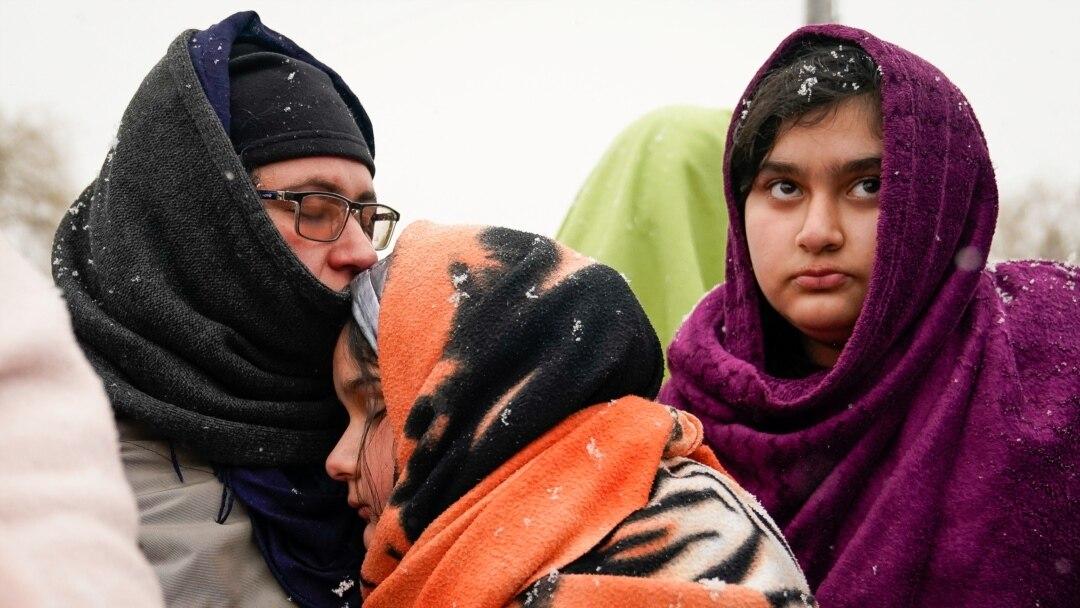 KELLY: For Nida, it was war, but also a series of tragedies that pushed the family into leaving their home in Daraa, Syria.

How did your family decide to leave?

AL-JABOURIN: My family at first actually did not want to leave until one day, my eldest brother got an asthma attack, and so we had to drive him to the hospital. And so that night, I remember it was really tough because I could hear the shootings. I could hear the bombings everywhere. And so it was hard to leave the home and take him to the hospital. And an hour away before we arrived there, they stopped us, and they told us that we can't enter the hospital because there's a lot of bombings. So my brother ended up passing away before he got to the hospital. And then a few months after, my dad also got shot in his leg. And then our neighbor's house got burned down with the people in them. And so at that point really, my parents were like, yeah, we can see our - like, how it's going to keep going. So...

AL-JABOURIN: My dad made the decision, like, the night before we left. And then I just woke up, like, 4 in the morning, and my mom told me, yeah, today we have to leave. So we just took, like, few clothes with us. And then I remember there was like a van, and it was full of people. Like, there was already six families in there, and we were just all, like, squeezing in there. And we had to be covered so no one can catch us. We sneaked out of Syria to Al Zaatari camp.

KELLY: This is in Jordan.

KELLY: Both Nida and Viet ended up in refugee camps after they left their homes.

You arrive Fort Indiantown Gap, Pa. This is summer of 1975. What's your first memory there? What do you remember?

NGUYEN: I remember the barracks. And of course, when you're young and your parents are taking care of you and you're surrounded by other children, it can actually seem like fun, a fun kind of a camp. But of course, that wasn't the reality. And I've certainly seen photographs in retrospect of a time in those camps. And there were lots and lots of people. Our lives were completely displaced. People had lost everything. So the pictures show people just trying to adjust to their new realities when their new realities were really devastating.

KELLY: People who'd lost everything - that's a pretty good description for what Nida's family faced too in that refugee camp in Jordan.

AL-JABOURIN: They gave us, like, a tents and some blankets, food. And they told us, yeah, this is your new home. And I was like, no way. This is not where I want to live. But it was - I was thankful that I was able to escape out of the war. I was just like, at that point in my life, I was just so sad. I was like, this is it? Like, I left my rest of my families. I left my cousins. I left my uncles. What is this? There's no friends here. There's no family here. But...

KELLY: But you were - you were safe.

AL-JABOURIN: Yeah. I think I was like - I think my parents made the right decision.

KELLY: Even the right decisions come at a price. But each of the people I talked to has built a new life. Nida will graduate from Syracuse University in the spring, having studied pre-med. She wants to work with refugees. Maiwand is helping other refugees get settled here in the U.S. with Lutheran Immigration and Refugee Service. And Viet won the Pulitzer Prize for Fiction and is a professor at the University of Southern California. All are settled now, but their identities will forever be tied to being a refugee, and that's on each of their minds as they watch the images of people leaving Ukraine.

SERI: When I see children are suffering, when I see women and elderly are suffering, it gives me all the images that I have from my own country. And as an human being, wherever we are, if you're in America, if you're in Europe, we should have open arms for the Ukrainians, and we should feel their pain. And I can feel their pain more than anyone else because I come from a country that's been torn apart by war. So I urge people to have respect for the refugees, that they arrive in seeking refuge, looking for a safe future.

NGUYEN: I can only say to them that I feel for them. I've been in their place. And it's a place of terror because you've lost so much, you've left so much behind and you don't know what the future holds for you. And none of us knows what the future holds for them. But I would say that looking at my own experience among Vietnamese refugees, many of us remain traumatized by what happened, but as a community, we survived and we built new lives. And we were able - we are able to tell our own stories and claim our own voices.

KELLY: Part of the story is that not all refugees have been welcomed with open arms, and that is something Nida noted.

AL-JABOURIN: Refugees are refugees regardless of where they came from or what colors their eyes or how they look. I think all refugees just should receive the same respect and help from anywhere they go to. It shouldn't be, like, more sad to see Ukraine's refugees than Syrians or anywhere else because at the end, we're all humans.

KELLY: The task ahead for the humans rushing out of Ukraine is rebuilding their lives, finding a sense of place, of home. I questioned Nida and Maiwand about that.

If I were to ask you, where is home, what would you say?

SERI: Where is home?

KELLY: Where is home?

SERI: Home is where you're safe. You're secure, and you're not worried that something's going to bad happen to your family. That's home.

AL-JABOURIN: I set a foot in the street, not knowing why my body needs. My thoughts fight among themselves, bleeding into tears. I don't recognize the look at my grandfather's eyes. He looks as if he's about to face his worst fear. The fear turns into a teardrop. He takes his glasses off. But the tear is stubborn. It refuses to leave his face. (Non-English language spoken). Oh, Grandfather. Our house key is lost, and the doors cry for those who left.