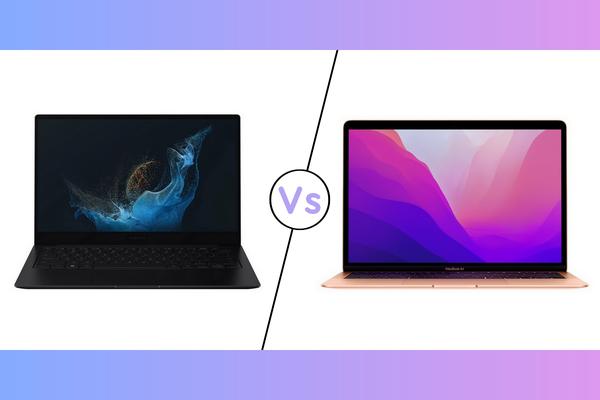 If you’re on the hunt for a lightweight laptop these days, the Samsung Galaxy Book 2 Pro is one of the laptops that should be on the radar. Not only is it extremely thin and light, it’s packing some serious performance thanks to Intel’s 12th-generation processors. Of course, the Galaxy Book 2 Pro is not alone in disputing the lightweight laptop space, and Apple has a lot to offer with its own MacBook Air.

If you’re on the fence between these two laptops, we’re here to help. Let’s take a look at the specs, design, and more to see whether you should choose the MacBook Air or the Samsung Galaxy Book 2 Pro.

We’ve listed the specs for both the 13-inch and 15-inch models of the Samsung Galaxy Book 2 Pro, but we’ll be focusing more so on the smaller model. The MacBook Air also has a 13.3-inch display, so that’s the comparison that makes the most sense.

Setting aside any differences in performance, specs, or design, the biggest factor most users will consider when choosing between these two laptops is the operating system. If you’re used to Windows 11, you’re going to prefer Samsung’s laptop, while the MacBook Air naturally runs macOS Monterey.

Windows is the most popular operating system in the world, and it’s generally good enough for just about anyone. Whatever use case you have, it’s very likely there’s an app or feature in Windows that can handle it. Plus, familiarity goes a long way in making something easier to use.

On the flip side, macOS is often considered more intuitive for beginners, so it’s a good idea for a first laptop. macOS is also popular among media professionals like video editors, thanks to exclusive software like Apple’s own Final Cut Pro. Plus, Adobe often supports the macOS versions of its apps (such as Photoshop and Premiere) better on macOS.

Ultimately, this will probably come down to what you’re most familiar with, though, and while I personally favor Windows, many others will feel otherwise.

When Apple first introduced the MacBook Air and the Apple M1 chipset, it was kind of a big deal because of its balance of performance and power efficiency. The MacBook Air delivered far better performance than Intel’s 11th-generation processors at the time, and it could last much longer on a charge.

However, the Samsung Galaxy Book 2 Pro comes with Intel’s 12th-generation processors, and from the 28W P-series at that. These new processors also have a hybrid architecture that mixes performance cores and efficient cores, and they have a much higher core count overall. That should greatly benefit Intel’s CPUs.

Judging by the benchmarks scores, it looks like Intel has caught up and surpassed Apple, at least in terms of multi-core performance. These are early tests of Intel’s processors, and there aren’t enough to determine an average score yet, but it should give you an idea of what to expect. We’ll have to wait for some more testing with retail units to have a clearer picture of the average performance of these new processors. 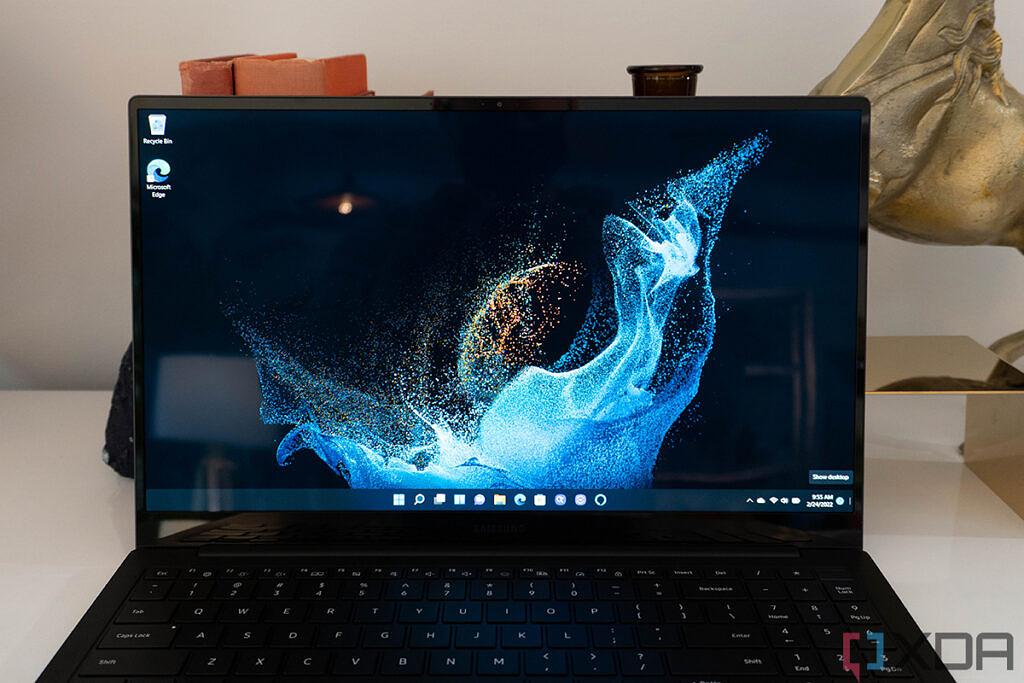 Again, this is based on early testing of Intel’s processors, and we could see these numbers change somewhat. Based on these tests, the Core i5 model would be faster than the Core i7, so more tests need to be run in order to have a clear picture of the average performance. Plus, a CPU benchmark like this isn’t necessarily indicative of real-life performance. You’ll get a great experience with both.

The new hybrid architecture in Intel’s 12th-generation processors should also deliver some improvements in terms of battery life, but with a 28W TDP, it seems likely that the MacBook Air will still last longer on a charge. The Arm architecture is still generally more efficient than x86.

As for GPU performance, you can expect the Apple M1 to dominate Intel’s Iris Xe graphics. Intel’s 12th-generation processors don’t make any major improvements to the integrated GPU, so Apple’s advantage is mostly untouched here. Even the 7-core GPU model should still be faster.

The Samsung Galaxy Book 2 Pro can be had with up to 32GB of LPDDR5 RAM, which gives it an edge over the 16GB of RAM on the Apple M1, so that’s one area where Samsung pulls ahead. However, it’s worth noting that Apple uses its unified memory technology, which can result in faster RAM speeds compared to traditional RAM on Intel-based PCs.

Display and sound: The Samsung Galaxy Book 2 Pro has an AMOLED panel

One area where the Samsung Galaxy Book 2 Pro stands out is the display. It’s not an especially sharp screen, though Full HD (1920 x 1080) is more than sharp enough for a 13-inch panel. But what really makes it stand out is that it’s an AMOLED Full HD display. Most laptops that have OLED displays only do so in their most premium configurations, with 4K resolution or something like that. That means you have to sacrifice battery life – and pay a lot more – for the benefits of OLED (like true blacks and a high contrast ratio). The Galaxy Book 2 Pro is a rare example of an OLED laptop that still has a reasonable price point and battery life.

Apple’s MacBook Air also has advantages, though. Most notably, Apple uses a 16:10 aspect ratio for its screen, and that tall format is great for productivity. If you’re reading a webpage, it requires less scrolling, and apps that have lots of UI elements, like video editing software, can display more of their UI in one screen. The MacBook Air also has a high resolution, at 2560 x 1600, so it looks super sharp at this size.

Both laptops offer a single configuration across the board, and they’re both great experiences. If you’re more into media consumption, you might prefer Samsung’s display, while the MacBook Air is better for getting work done.

For sound, both laptops offer a stereo speaker setup with two speakers, which is about what you’d expect for a 13-inch laptop. You should get a solid audio experience either way.

Above the display, the Samsung Galaxy Book 2 Pro pulls a victory over the MacBook Air in the webcam department. Samsung has upgraded the webcam to a Full HD 1080p camera, compared to the 720p FaceTime camera on the MacBook Air. To be fair, Apple is using artificial intelligence on the Apple M1 chipset to improve image quality, but you’re likely to get better image quality on Samsung’s laptop. Plus, the Galaxy Book 2 Pro has features like auto-framing.

Design: The Galaxy Book 2 Pro is much more portable

Just like its predecessor, the Samsung Galaxy Book 2 Pro is one of the thinnest and lightest laptops on the market. It weighs just 1.92lbs in the 13-inch model, and it’s a mere 11.2mm thin. Despite its name, the MacBook Air is actually not all that light for its size. At 2.8lbs and measuring 16.1mm in thickness at its thickest point, portability is a clear loss for Apple’s lightweight laptop. To be clear, you should still be able to carry it around relatively easily, but Samsung’s laptop is just much better. Even the 15-inch model is thinner and lighter.

In the aesthetics department, things are a bit more subjective, but we’d still say Samsung has a more interesting offering. The Galaxy Book 2 Pro comes in two color options: Graphite and silver. The graphite model is essentially all black, including a color-matched keyboard, but the silver model is a bit more unique – the exterior is silver, but the interior is white, and the keys are color-matched to the keyboard base.

Meanwhile, the MacBook Air comes in three color options: silver, space grey, and gold. These are all very neutral tones, and silver and space grey are essentially just different shades of silver. There’s nothing all too unique going on with this design, and the keyboard has black keys in all the models. If you want something that feels premium and doesn’t draw too much attention, this works, but it’s not really exciting.

You might think that the thin and light design of the Samsung Galaxy Book 2 Pro means you get fewer ports, but that’s not true, either. It has one Thunderbolt 4 port, one regular USB Type-C port, USB Type-A, a headphone jack, and a microSD card reader. The 15-inch model also has an HDMI port. You get a decently varied setup, and Thunderbolt 4 port means you can connect peripherals like displays, external GPUs, and other Thunderbolt accessories.

Meanwhile, the MacBook Air only has two Thunderbolt/USB4 Type-C ports, plus a headphone jack. And, unlike the Samsung laptop, you can’t use the Thunderbolt port to connect an external GPU, and only one external display is supported. That makes for a much more limiting setup overall, and while it’s nothing new for Mac fans, it’s still a bummer.

In terms of wireless connectivity, the two laptops are similar. The Samsung Galaxy Book 2 Pro supports Wi-Fi 6E, while the MacBook Air only supports Wi-Fi 6, and both support Bluetooth 5.

As we said above, the biggest factor when choosing one of these laptops is probably the operating system, and that’s a very subjective topic. That makes it hard for us to recommend either one, but you’ll get a great experience with both.

The Samsung Galaxy Book 2 Pro does beat the MacBook Air in a few ways. For one thing, it’s far more portable, being both thinner and lighter, and the design is arguably more interesting. And even with that in mind, you get more ports with it. It also has a nice vibrant display thanks to the AMOLED panel you don’t usually see at this price point, making it ideal for media consumption. It also seems to be faster based on early testing of Intel’s new processors, and you can get it with more RAM, too. As we’ve mentioned, though, benchmarks like Geekbench don’t paint a full picture, and the fact remains both laptops will be very fast.

Meanwhile, the MacBook Air has a better display for productivity, thanks to the taller aspect ratio and higher resolution. It should also have better battery life, since the Arm-based Apple M1 processor is more efficient and uses less power than Intel’s 28W P-series processors.

Personally speaking, I’d say the Samsung Galaxy Book 2 Pro is the better choice, but there are valid reasons to prefer the MacBook Air. If you’ve made your choice, you can buy either one of these laptops below. Otherwise, you can check out the best laptops you can buy today or, if you’re keen on macOS, see our list of the best Macs.