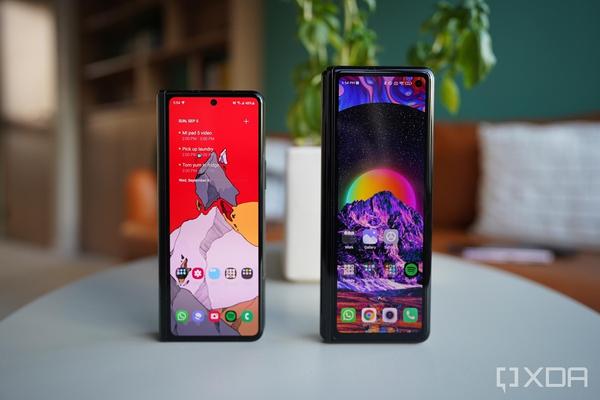 It’s often said that Samsung’s biggest rival in the smartphone space is the Apple iPhone. But that’s a lazy narrative in my view — realistically speaking, consumers don’t jump between eco-systems often, and iPhone users tend to be pretty happy in their walled garden with no intentions of really leaving.

In other words, Samsung’s biggest challenger in the smartphone space is another Android brand. In the past year or two, that biggest challenge has come from Xiaomi, whose products usually launch at around the same time as Samsung’s, and often at a lower price point. The most heated battle is probably in the slab flagship space, as the Xiaomi Mi 11 Ultra seemingly took everything Samsung did with the Galaxy S21 Ultra and dialed it up to 11.

But the two brands have competing foldables too. So far, this battle is only within China, as Xiaomi’s foldable doesn’t sell outside its home country. But it’s very likely that eventually, this battle will also drag out across the rest of Asia and Europe. So how does Xiaomi’s Mi Mix Fold compare against Samsung’s Galaxy Z Fold 3?

I usually push back against the idea that any similarities between phones must mean one brand “copied” the other (like people who insisted the OPPO Find X3’s camera module was a clone of the iPhone’s design). But in the case of the Xiaomi Mi Mix Fold, it’s clearly inspired by Samsung’s Z Fold series. They use the same folding philosophy, same name, even the same T-shaped plastic caps at the hinge to prevent dust entry.

But Xiaomi made some changes that are, at least in my opinion, welcome. The Mi Mix Fold’s screen, when unfolded, has a taller 4:3 aspect ratio that helps it closer approximate the aspect ratio of a traditional slab phone. This means apps tend to display on the Mi Mix Fold with less scaling issues than on the more squared Galaxy Z Fold screens.

Instagram, for example, shows itself on the Mi Mix Fold mostly fine. on the Galaxy Z Fold 3 (or any Galaxy Fold before it), the app usually needs pillar-boxing to prevent cutting too much off the top and bottom of the app.

Both foldables run on the same Snapdragon 888 with the same storage size and type. Xiaomi’s foldable can get up to 16GB of RAM while Samsung’s stay at 12GB. One more win for Xiaomi in this category would be in the speakers — the Mi Mix Fold has a quad-speaker system tuned by Harmon/Kardon (ironically a subsidiary of Samsung!) and sounds just a bit fuller, with more range than the speakers in the Galaxy Z Fold 3. 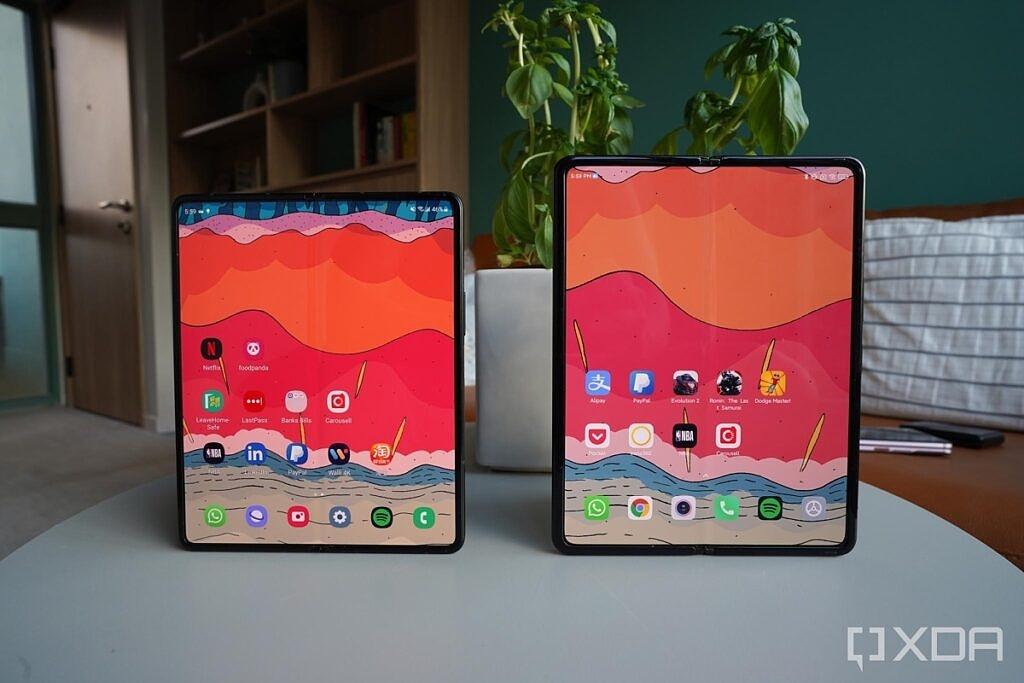 We’ll cover the cameras in a separate section. Other hardware bits are all wins in Samsung’s favor. The Galaxy Z Fold 3 is rated IPX8 water resistance; the Mi Mix Fold has no such rating. The Galaxy Z Fold 3’s screens refresh at a higher rate, get a bit brighter and the main screen is covered by a new type of film that feels more like glass than the plasticky feel of the Mi Mix Fold’s screen.

The Galaxy Z Fold 3 supports stylus input; the Mi Mix Fold does not. But the biggest win may just be the hinge. Samsung’s hinge is very sturdy and can stay halfway-folded (which Samsung calls “Flex Mode”); the Mi Mix Fold’s hinge feels slightly loose and reminds me of the original Galaxy Fold’s hinge.

When Xiaomi introduced the Mi Mix Fold a few months ago, its cameras got plenty of attention for two reasons. First, Xiaomi introduced a “liquid lens” which features a layer of liquid that changes the sensor’s focus and focal length via electrical voltage. Basically, it allows a single sensor to double as a 3x optical zoom lens and a macro lens.

The second headline-grabbing feature was the inclusion of a 108MP main camera, which was still an impressive sensor with a relatively large 1/1.52″ sensor, at least for that time half a year ago.

But the results are closer, and both companies trade wins, thanks to Samsung’s superior software processing. While Xiaomi’s larger main camera sensor has a shallower depth of field, which means creamier and more “professional-looking” bokeh, Samsung’s main camera holds up well in most lighting conditions.

When it comes to the ultra-wide camera, Samsung’s 12MP lens is better, with less distortion than Xiaomi’s 13MP shooter. But then when it comes to zoom shots, Xiaomi’s liquid lens with 3x optical zoom is clearly better than Samsung’s really mediocre telephoto 2x zoom.

As for the selfie camera, the Mix Fold only has one — a 20MP shooter housed in a hole-punch near the top of the outside screen; while the Z Fold 3 has two — a 10MP on the outside, and a 4MP “under-screen” camera on the inside.

The under-screen camera on the Z Fold 3 is half-baked and should only be used for casual video calls. So really, both phones have one functional selfie camera each. I am not much of a selfie person, but I took these samples in a tough lighting condition on purpose (against harsh backlight), and Samsung’s software algorithm did a better job of finding the proper balance.

Both phones run Android 11, with each brand’s software skin on top. As a phone, Samsung’s One UI does a bit more to adjust to the fact it’s a foldable phone. For example, Samsung has a new Labs section in the phone’s settings to allow resizing apps by aspect ratio. Most native Samsung apps will also take advantage of Flex Mode to better fit an L-shaped, laptop-like form factor. Xiaomi’s software, on the other hand, mostly behaves just like any other Xiaomi slab phone software, with one big exception — PC Mode.

As the name implies, PC Mode turns the Mix Fold’s UI into something resembling a Windows UI, with a taskbar at the bottom housing a start menu in the lower-left corner. Apps can also open in a resizable floating window.

The Mix Fold running PC mode, with a Bluetooth keyboard

The Galaxy Z Fold 3 can do something similar, but only when outputting to an external display. I’m talking about Samsung DeX, which connects to external monitors or TVs wirelessly or via cables.

Samsung’s DeX being able to transmit wirelessly to smart TVs has come in very handy during business trips in the past, but I think Xiaomi offering the feature on devices brings real advantages too.

Similar to ourGalaxy Z Fold 3 vs Huawei Mate X2 comparison piece, this piece is more aimed at comparing cutting-edge tech for the sake of comparing than being a real buyer’s guide, because the Xiaomi Mi Mix Fold is sold officially only in China. However, the Mi Mix Fold’s ability to support Google apps and a far lower price than the Mate X2 does make it a more realistic import option for tech enthusiasts.

When the Mix Fold was announced half a year ago, its 9,999 yuan ($1,540) price was impressive, because it was a lower price point than we had previously seen in a foldable. Whatever shortcomings Xiaomi’s foldable suffered from — like the inferior hinge and just a 60Hz refresh rate for the main screen — could be justified because it was a good $500 cheaper than the Galaxy Z Fold 2.

However, Samsung has since closed the gap a bit with the Galaxy Z Fold 3, as it starts at $1,800 ($200 cheaper than the Galaxy Z Fold 2’s starting price). This essentially negates any value proposition for the Mix Fold, and if you’re going to pay roughly the same price, the Galaxy Z Fold 3 is just a more polished device all around. The addition of IPX8 water resistance rating and stylus support, not to mention Flex Mode, brings more ways to use the foldable.

But if there’s one thing we’ve learned from covering Xiaomi, it’s that they release updates to phones pretty often. Who knows, maybe the next Xiaomi foldable is just around the corner?