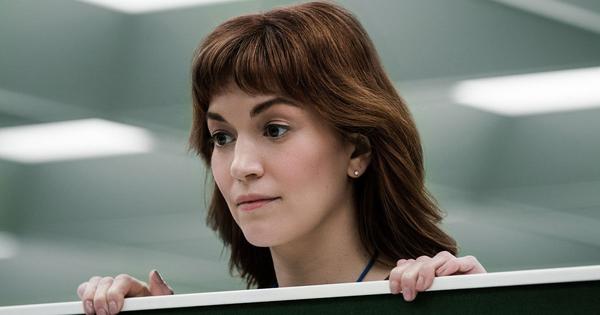 I wore out the pause button on my remote from watching this one, y’all. This week’s episode of Severance provides a huge information dump: context for the inner workings of Lumon, the teachings of Kier, and the evolution of the severance process.

First off, Harmony Cobel is definitely drunk on Kier Kool-Aid. As the episode opens, we see her perched on a bed, placing a necklace with a severance-chip pendant over her neck. Her bedroom appears to be some sort of hospital-prison hybrid, with white cinder blocks for walls and a harsh fluorescent light illuminating her bed. Why would anyone choose this décor? And furthermore, who is in that chip? It seems unlikely that it’s Petey, so … who is it?

The answer to that question might reside in Cobel’s Über-creepy shrine to Kier. Lumon may or may not actually be a cult masquerading as a biotech company (it probably is), but this setup illustrates that Cobel has some very deep and very emotional ties to the Eagan family — and possibly Kier himself. There are all sorts of Easter-egg goodies on the shrine, including a certificate for the Myrtle Eagan School for Girls, a breathing tube and hospital bracelet that reads “Charlotte Cobel, DOB: 3/17/44” (Cobel’s mother, perhaps?), and a punny flyer for the seventh annual Kiernival.

But what stands out most are the paper masks standing guard at the four corners of the shrine. Curiously, they appear to be the fool, the goat, the old woman, and the young woman from the painting Burt and Irv admired when they first met. These masks may possibly correspond to the four tempers — woe, frolic, dread, and malice — but which is which I couldn’t tell you; they all creep me out equally.

It’s clear that Cobel isn’t working at Lumon for the stock options or hefty paychecks. She’s there because she desperately believes in what they’re doing. She believes in Kier. And Patricia Arquette has got the religious-zealot sparkle in Cobel’s eyes down to a frightening science.

Feeling called by her higher power, Cobel starts to go rogue. Throughout the rest of the episode, she loses her shit on the refiners, even hatching a plan to lock them into their work space so they can’t go “free-range chicken” all over the Lumon labyrinth. She also decides to install herself into Devon and Ricken’s lives as their lactation consultant. Clearly Lumon has no idea this is happening because later when Graner comes knocking at Cobel’s door, she gets very cagey about why she’s wearing a nurse’s uniform.

Suddenly, Devon seems to be in play as an important character all her own instead of just “Mark’s sister.” Not only is she dealing with Cobel in disguise, but she’s also starting to put together some weird truths about what Lumon is planning for the severance process.

When Devon sees the mysterious woman from her birthing retreat at a local park, she says hi, and a very awkward and unpleasant exchange unfolds. The woman is cold and distant, and Devon is confused. The lady’s husband introduces himself as Angelo Arteta, and when Devon tells him where she knows his wife from, he spirits his family away. This prompts Devon to do some digging online.

Devon’s search brings up several articles in which this guy is quoted as being a proponent of “legalized severance.” Tucked into the corner of the screen is an article suggesting that Lumon was a key donor to Arteta’s campaign, because of course it was. The idea of severance for a larger populace was suggested at the start of the season, but this is the first time we have revisited it in a while. It seems as if the senator’s wife severed herself to shift the labor of actual labor onto her innie. I have no doubt that this is something that many women might choose to do if given the opportunity, but the concept is twisted, to say the least. Making an innie give birth to a child — or maybe even carry an entire pregnancy (!) — only to never let the innie see the child again is Handmaid’s Tale–level monster behavior.

For the Lumon innies, life has become more interesting. Irv is even breaking some rules! We witness a sweet exchange in which Burt leads Irv into a secret room full of greenery. Director Aoife McArdle peeks through the lush leaves at the star-crossed lovers, making us feel as if we’re eavesdropping on an intimate moment. It’s impossible to watch them share that soft forehead nuzzle without considering if they might be together on the outside.

Love seems to be on everyone’s minds as Helly and Mark take their work flirt to the next level, and both Irv and Dylan call Mark out on it. Later, as Helly and Dylan talk about the Case of the Missing Ms. Casey, Dylan muses, “Well, maybe love transcends severance.” He brushes this idea off quickly, but the show seems to be suggesting more and more that strong emotion might just break on through to the other side.

Suppose severance is ultimately meant to be some sort of brainwashing or homage to Kier (okay, yes, I’m going to go on record and say it’s definitely a cult). In that case, it stands to reason that if the severed employees still have lingering memories of their loved ones, the process might need to be tweaked. As the whole severed floor is set up like some sort of warped video game with mazes and secret departments and color-coded systems, there’s a distinct possibility that everything — the scary numbers, the goats, whatever it is that the O&D department is doing with those watering cans and hatchets — is all just a wild version of quality control to ensure that the severance process works.

MDR and O&D have a little tête-à-tête, and the two groups begin to commiserate. Mark gives an impassioned speech, asking the same question he asked Cobel earlier: Why won’t they tell them what they’re doing? Mark wonders, “If the Eagan philosophy is ‘Illumination above all,’ then why doesn’t that include us?”

Before Milchick storms in, Dylan pockets a strange card with simple, cartoonlike imagery. Due to what happens later, we learn that these cards are both incredibly important and top secret. As he chooses a card, the camera pans over a tray full of options. All of the cards depict two men, one in a blue shirt and one in green, with red arrows showing how the two figures should interact. They remind me of CPR instructional posters that used to hang in the service aisles of various restaurants I worked at … but these cards are definitely not depicting lifesaving techniques. In fact, most of them look as though they’re depicting attacks.

Dylan. Oh, Dylan. I wished for us to learn more about him last week, and this episode delivers. He has an adorable son! And his son can count to 1,000 really fast! And he, um, has a closet? Okay, maybe that’s all we learn about him. But we finally get a delicious glimpse of Dylan’s outie, even if it is only for a few moments. Also, what?! Milchick can switch the employees to innie mode even when they’re not at Lumon?! I totally thought that the elevator served as some sort of set border. Instead, it seems that the severed employees can be remotely controlled by anyone with access to a switch at Lumon. I’d imagine that the outies didn’t sign on for this, but outie Dylan doesn’t seem too peeved once Milchick switches him back. His face is inscrutable as he says “We done here?”

Elsewhere, Mark’s outie is on a second date with Alexa, Devon’s radiant doula. Alexa seems to be attracted to mess because she gave Mark another chance despite his drunken display on their first date and his ocean full of baggage. As she encourages him to talk more about Gemma, he expresses sorrow, but we can also feel his relief that he has been invited to talk about her.

This week, we see different shades of both Mark’s innie (finally questioning authority) and his outie (this lucid and sincere remembering of his wife), but Adam Scott somehow manages to make all of these shades feel as if they’re coming from the same palette. No matter how you slice him, Mark always seems like a complete whole thanks to Mr. Scott’s nimble character work.

Mark and Alexa end up sleeping together, but something continues to gnaw at Mark. Perhaps it’s because he just saw Petey’s daughter, or maybe it’s something else, but he decides to go grab the flip phone from the garbage. It immediately starts ringing. As Mark picks up the phone, McArdle treats us to an overhead shot of him standing alone on the street: He’s a simple black silhouette, framed by the snow, and there are echoes of the opening-credits sequence’s black goo-shadow emerging from the trash can.

Coincidentally, both Graner and Mark head out to the university at the same time to check out the Lumon defector who has been un-severing people. Mark makes contact with her, and she leads him down a darkened hallway. Cliffhanger activated.

It looks as though it’s time for my staggered exit, so I’m gonna go grab the elevator. Until next time …

• Best quote of the week: “What the fuckity fuck?”

• We saw a few items this week that state that the town of Kier is in a state with the abbreviation of PE. Either that’s short for Prince Edward Island in Canada or the show is making up a fictional state in which this narrative takes place. Or maybe it’s just an acronym for “Praise Eagan.”

• Piggybacking off Dylan’s knot skills from last week, it’s interesting to note that Helly can draw pretty well. Her doodle of the desk lamp is pretty gorgeous and exhibits knowledge of shading and shadow. Even though this isn’t the most fascinating tidbit, it seems worth noting due to its likely overlap with Helly’s outie.

• This was the third and final episode of the season directed by McArdle. Here’s hoping she comes back for season two.