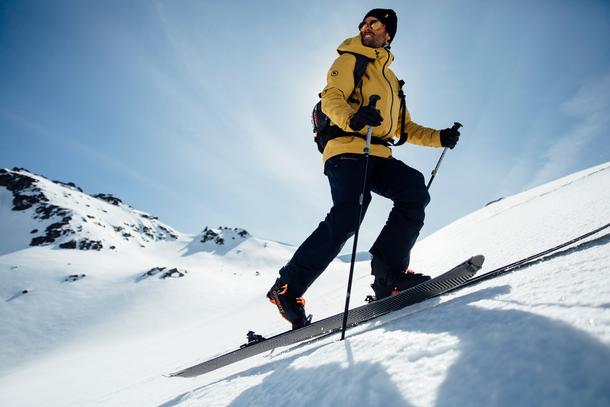 The backcountry has seen a flood of skiers searching for fresh tracks and adventure in recent years. To complement this boom, manufacturers have ramped up their product offerings in boots, bindings, and skis.

The result has been lighter skies, hybrid bindings with alpine and touring options, new skin systems and a wide selection of touring boots with multiple flex patterns. All this innovation has brought new consumers into the fold for exploring the steep and deep.

It is also important to have a ski that is not too wide for touring up and skiing down. A ski in this suggested range will allow for good edging on firm snow while touring, it will help with the uphill kick turn, and it is lighter, creating less fatigue. The downhill advantages are a stable width that floats but not too high on the snow and has a flex designed for touring.

The mistake many skiers make is using a touring boot with wide non touring skis that are 102–116 centimeters wider with hybrid bindings. There are a few issues here, one the hybrid binding creates a flat spot on the ski and an alpine ski is generally stiffer than a touring ski. This combination with a touring boot provides the skier with a stiff wide ski that accelerates and is less forgiving than a touring ski. Plus, while skinning, it’s heavy, harder to kick turn and can slip out more on firm snow. 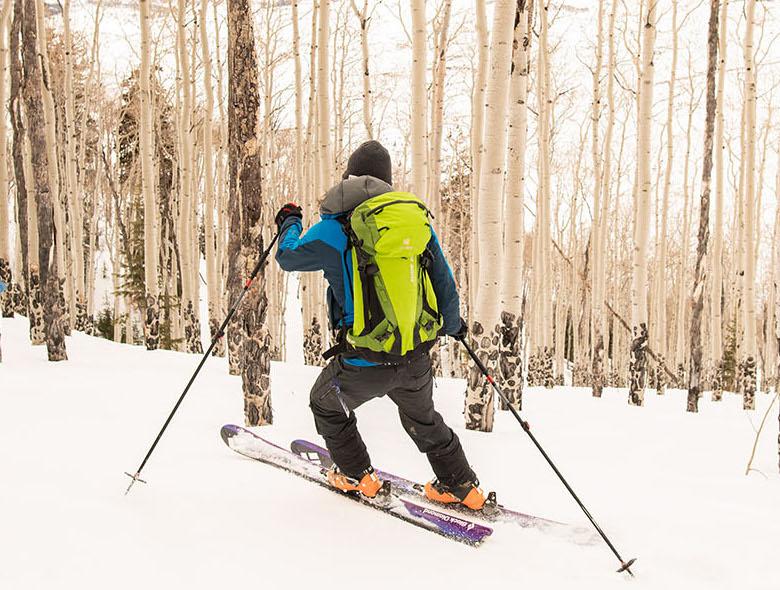 The characteristics of a touring boot are important to understand, they have a straight cuff with little to no forward lean. This increases performance while skinning uphill but creates some challenges when alpine skiing down. The lack of angle in the cuff of the boots places the hips slightly aft of center and makes it difficult to bend the knee over the ball of the foot. When this setup is on a stiff, wide ski the problem is magnified.

For the consumer it is appealing to have equipment that can cross over from touring to resort skiing. It makes traveling easier and provides a wide range of adventures available during trips to the mountains. Thus, there are a lot of people skiing “touring” boots on traditional alpine skis.

However, when it comes to performance these boots are lacking in a few areas. Essentially what is happening is the sweet spot or balance point of the skis is shorter when the cuff of the boot is straight.

Wide alpine skis have a lot of surface area and float on the snow rather than sink into it and when they are placed on edge the ski accelerates and scoots forward moving your feet in front of your hips which puts you in the back seat. The solution most skiers come up with is to brace against the ski by straightening the downhill leg, locking out the knee and the ankle and this generally results in the skier breaking at the waist or skiing in a hunched over position.

Unfortunately, this is ineffective for several reasons, first it is not an athletic stance, second, it’s not a stable position and third it causes fatigue. And moreover, it widens your stance, so you have a stiff lower leg separated from the uphill ski which is scissored forward. Generally, this also causes the upper body to be rotated across the hill.So basically, not good all around.

The solution is to create stability while skiing in touring boots and this is a combination of upper body position and a narrow stance. For the upper body make sure the shoulders are facing downhill and your arms are extending and reaching forward for the pole plants. Narrowing the width of your stance also increases your balance. By weighting the inside ski and narrowing your stance you will gain stability as the two skis act as one creating a wider platform to stand on. This will decrease the overall edge angle of the downhill ski which will ultimately slow down the acceleration of the skis across the hill. This will make it easier to stand taller and remain forward in your boots.

Once you obtain this stance with a calm and strong upper body and a narrow stance you can start to smear or skid the last third of your turn which will also increase your stability and make it easier for you to move your hips over your feet in the transition between turns. The overall result will be more efficient and powerful skiing.

Extreme skiing pioneer Dan Egan coaches and teaches at Big Sky Resort during the winter. His 2022 steeps camps at Big Sky Resort run Feb. 24-26, March 10-12 and March 17-19. His newest book, “Thirty Years in a White Haze,” was released in March 2021 and is available at White-Haze.com. Visit Dan-Egan.com to preorder “All Terrain Vol. II.”