Home folding phone The Galaxy Z Fold 3 is a great combination of phone and tablet — but is it worth $1,799? 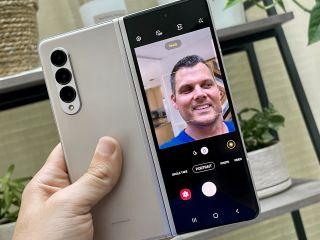 Samsung’s 2-in-1 device, the Galaxy Z Fold 3, is part smartphone, part tablet — a full-size smartphone that folds open to reveal another 6.7-inch display on the inside.

While it brings some updates compared to last year’s Z Fold 2 — a waterproof build, a faster processor and S Pen support — the $1,799 price point ultimately limits its appeal, especially when compared to other powerful smartphones on the market.

The Galaxy Z Fold 3 aims to deliver the best of both worlds, combining a phone and tablet into one device. It has great hardware and all the performance you could want, but the software needs more work. It's also expensive at $1,799.

What you need to know: Samsung threw nearly all of its high-end features into the Z Fold 3, except a Space Zoom-capable telephoto lens on the back. It has two 120 Hz displays, a lightning-fast processor, improved multitasking features and S Pen support. The latter is firmly optional, though, which takes away how productive the Z Fold 3 can be on its own.

How this compares: The Galaxy Z Fold 3 is really in its own category and is the most powerful folding phone currently on the market. Still, those who want a phone that excels in productivity can spend less and opt for a Galaxy S21 Ultra, a Note 20 Ultra or an iPhone 12 Pro. The S21 Ultra and Note 20 Ultra support split-screen multitasking, deliver on-par performance and package it all in a more portable build. Furthermore, you’re getting a more polished device with a typical smartphone.

The Galaxy Z Fold 3 is a substantial device that feels weighty in the hand. But that hefty build aids in durability.

The body of the Z Fold 3 is made from Samsung’s Armor Aluminum material, a mix of aluminum and other metals — akin to Apple’s iPhone build. The rear of the Z Fold 3, when closed, has a matte finish that doesn’t pick up too many fingerprints. This is also the portion of the device with the Qi wireless charging coil. The main three cameras also reside on this panel and stick out, meaning the Z Fold 3 cannot lay flat.

In our testing, the Z Fold 3 opens and closes without a hitch. It’s a smooth operation and the hinge is sturdy enough to stop anywhere along its rotating axis. This way you can prop it up to use the cover screen with the Z Fold 3 acting as a tripod. We could also get the Z Fold 3 wet without worrying about device safety. Samsung added an IPX8 water resistance rating, and that means the device can handle up to 1.5 meters of water for 30 minutes. We dunked the Z Fold 3 several times into a bucket of water without issue and used it outside during Hurricane Henri. Good on all fronts, but note that this device is not rated for dust, something that we’re more critical of given previous models. The original Galaxy Fold was delayed when microparticles and other debris appeared under the screen and damaged the overall device. Samsung fixed a lot of this with the “Hideaway Hinge,” but a full dust resistance rating would alleviate these poor memories.

The front of the Galaxy Z Fold 3 looks like a typical smartphone. The front 6.2-inch screen is covered in a layer of Corning Gorilla Glass Victus, so, unlike the bigger internal display, it feels like real glass.

The AMOLED display offers vibrant colors, dynamic images and buttery smooth visuals. It’s a modern smartphone display in every way — complete with a 120 Hz refresh rate, doubling the rate found on all iPhones.

Our main qualm with the cover display is the narrow nature of it. Typing on the Z Fold 3’s cover screen is tight and leads to many typos until you get used to it. It’s more cramped than an iPhone 12 Mini, a Pixel 4a or even the iPhone SE. It’s good for consuming content, though.

Flipping open the device reveals the notch-free, pinhole-free and mostly bezel-less 7.6-inch main screen. Like on the Z Fold 2, it’s an Infinity Flex display that delivers a detail-filled experience. It’s not a glass display but Samsung’s Ultra-Thin Glass technology. Essentially it’s a layered system of components with plastic and glass, along with a plastic screen protector on top. 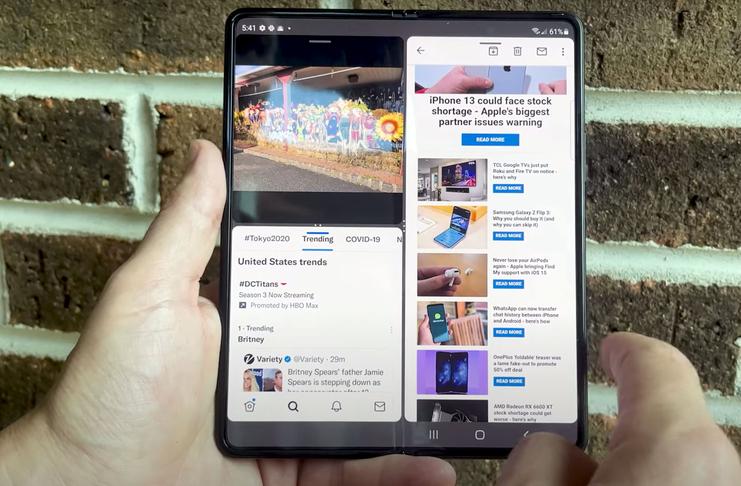 As expected, it’s more malleable and more plasticky in the center where the crease lives. It’s not that annoying, but it does sit noticeably in the center. It can be a little awkward when writing with the S Pen in this spot, but it’s not a deal breaker.

Colors look great, and the AMOLED panel can really show the full spectrum. And since it’s based on OLED it can show stark contrast points with ease. It’s also a 120 Hz refresh rate, making content appear more lifelike, and it’s especially great at displaying action sequences.

The Galaxy Z Fold 3 is a beast when it comes to performance — Android 11 with Samsung’s One UX interface glides, and we couldn’t make this device slow down at any point during our testing. The Qualcomm Snapdragon 888 processor inside with 12GB of RAM might be overkill for everyday tasks, but it also rises to the challenge with multitasking, scribbling notes and gaming — even when you do all of that at the same time.

We swapped to the Z Fold 3 for close to two weeks, using it as our main phone for things like calls, texts, video calls, personal email, social networking and gaming. We also did as much work as possible on it, using apps like Slack, Outlook, Monday.com, Trello, Zoom, Webex and countless others. When folded at 90 degrees, you can place a Google Doc on top and the keyboard on the bottom.

And while it can’t replace a laptop as a full device, we could get much of our other work done on the Z Fold 3. This time around, Samsung managed to create a device that blends between phone and tablet. It’s apparent that Android and Samsung worked out some kinks that are specific to foldables, but it’s not yet a full-throttle experience.

Samsung “Labs” in settings lets you play around with what the tech giant feels is the future. You can use any app in a multi-window — which lets you customize the size of the app’s window and effectively put as many apps on the screen as you wish. So you can have Slack on the left, email on the top right, a spreadsheet on the bottom right, music playing in the background and a hovering browser window, effectively making the most out of the 7.6-inch display. But it’s still in beta and is not enabled by default out of the box.

Out of the box, you can easily use what is effectively Split View, and it’s addictive — you can have an app on the left and one on the right, taking up both sides. It’s similar to the Split Apps on the Surface Duo, but it really shines on the Z Fold 3, as it’s a seamless screen. This, as well as multitasking on Android, really lets you see the limitations of iOS as well — you shouldn’t be limited to just one app on the screen.

For the Z Fold 3 to be the ultimate in productivity, the S Pen needs to be an integral part. It’s really a joy to use on such a massive screen and has become our go-to for quick note-taking while on the fly. It’s also nice to know using the stylus will not cause significant damage to the screen. The S Pen Pro or S Pen Fold Edition are the only two versions that work on this device. The tip can retract and will move in when it feels more pressure. This way, it doesn’t damage the display. Luckily, it doesn’t impact the writing experience.

It would be a much more cohesive experience if the Z Fold 3 had a spot for the S Pen or even magnets on the side to keep it along for the ride. Samsung needs to figure this out for the next generation, as it’s a big deal for many users that the support is here. If you want a device that’s designed for the S Pen, the Note is still the way to go. We don’t know what the future holds there, though.

There are five cameras in total on the Galaxy Z Fold 3, and the primary lenses on the back are:

For nearly any shot you could want to shoot, the Z Fold 3 has you covered, and it’s pretty close to the likes of the iPhone 12 or the S21 Ultra with the wide or ultrawide lens. It falls behind a bit with the telephoto lens, though. You can still do some fancy tricks like have the cover screen act as a viewfinder when you’re shooting with the full main display, though the Z Fold 3’s main display is just too big to use for taking photos. You can see a full gallery of test images below.

The other two cameras live in each display — the cover screen has a pinhole notch at the top for a 10-megapixel lens, and the main screen has an under-display camera. The latter is only 4 megapixels, which doesn’t deliver the best images, but it lets the display continue on top of it and delivers a notch-free experience. We’d stick with the front-facing lens on the cover screen for selfies and video calls, which delivers better-quality results.

On average, we got about eight and a half hours of screen-on time when primarily using the main display. Not the longest of battery lives, but luckily it supports fast wired charging and can quickly juice up with an Anker Nano II block. You need to bring a brick, as Samsung doesn’t include one in the box.

Last but not least, let’s talk about 5G. The Galaxy Z Fold 3 supports the two biggest standards in the United States: mmWave and Sub-6. We were able to test both of these networks on Verizon, and Sub-6 on AT&T and T-Mobile. They both worked and let us communicate while out and about on the Z Fold 3. Still, though, 5G isn’t everywhere, and it is mostly an act of future-proofing. Sub-6 is likely in your area, but it isn’t the super-fast variant of 5G. It’s more bandwidth, so when you’re in a spot with many 5G devices, there’s more network capacity for everyone to connect. AT&T’s Sub-6 speeds are close to 4G LTE, hovering around 200 to 300 Mbps.

When you find mmWave, like getting a line of sight with a cell tower, you’ll see the super-fast 1,000 Mbps speeds that 5G promises. However, mmWave is harder to roll out and trickier to successfully connect to. It’s also not widely available from any carrier.

The Galaxy Z Fold 3 wants to deliver the best of both worlds, combining a phone and tablet into one device that’s the ultimate at everything. The hardware is nearly perfect, the performance is lightning fast and the software still needs more work. At $1,799.99, though, the Galaxy Z Fold 3 is the pinnacle example of a luxury device ideal for early adopters and tech lovers.

For everyone else, the ultimate in productivity is found in the S21 Ultra, the Note 20 Ultra for those who want an embedded S Pen and even the iPhone 12 Pro.

how much is a samsung fold phone