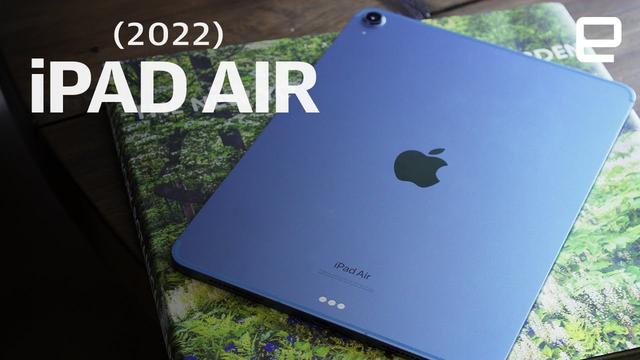 Just a few days before Apple announced the 2022 iPad Air, rumors started swirling that it wouldn’t be powered by the expected A15 Bionic processor that’s in the iPad mini and iPhone 13 lineup. No, it would get an M1, the same chip found in a host of Macs and the iPad Pro, devices that cost a lot more than the iPad Air. At the time, I didn’t put much stock into this rumor; the iPad Air and 11-inch iPad Pro were already extremely similar devices. This would make the gap between them even smaller.

I’ll have to eat crow on this one, as Apple went ahead and put the M1 in the new iPad Air. There are a handful of other little changes here, including a much-improved front-facing camera and 5G connectivity, but the M1 is the real upgrade of note. And while the basic experience of using the Air is mostly the same as it was when we last tested one, having the power of an M1 means this is one of the most future-proof iPads you can buy.

The 2020 Air was a total redesign; not so this time. From the outside, the only way anyone will know you’re using the 2022 model is if you have one of the new color options introduced this year. (Apple loaned me a device in a lovely new shade of blue.) Otherwise, it’s exactly the same size and effectively the same weight; Apple’s specs page says it is two hundredths of a pound heavier than the old model, not something anyone would notice. Touch ID is still built into the top button, and it works just fine although I definitely prefer Face ID.

The display is also the same as the last-gen edition, but that’s not a bad thing. It’s a 10.9-inch “liquid Retina” LCD display with Apple’s True Tone feature for optimizing the screen’s color temperature based on ambient light. It’s just perceptibly smaller than the 11-inch screen on my iPad Pro, and the bezel looks a bit chunky, but it doesn’t change the way I use the tablet. It’s clearly not as nice as the mini-LED display on the 12.9-inch iPad Pro, but it’s a far better screen than the one on the basic iPad. The main difference between this display and the one on the 11-inch Pro is the latter has the ability to refresh at up to 120Hz, while the iPad Air is stuck at 60Hz. Although I definitely enjoy using Apple’s “ProMotion” screens, I can’t say I noticed much of a difference once I sat down and started using the Air.

Other things that remain unchanged include the price and storage options. $599 gets you 64GB, and you’ll have to pay another $150 to quadruple that storage to 256GB. I wish that the base model came with 128GB, but Apple has to differentiate the iPad Pro somehow. Sixty-four gigs is enough for most people, but if you want to store a lot of videos and games or plan on doing a lot of creative work with it, you’re probably better off just getting 256GB from the jump. As usual, Apple provided us with a top-of-the-line model, with 256GB of storage and built-in 5G.

The back camera, too, is identical to the one from the 2020 Air. It’s a 12-megapixel shooter with a wide-angle lens and no flash. It produces perfectly fine images, but as usual the camera on your phone is probably better in almost any circumstance. Back cameras on tablets have pretty niche use cases, like scanning documents and trying things in AR, and the Air’s camera is just fine for that, but I wouldn’t let it influence your purchase decision.

Finally, the new Air uses the same accessories as the old model. That means the two first-party keyboard cases Apple offered for the 2020 Air work fine here. Unsurprisingly, the second-generation Apple Pencil that magnetically snaps to the top of the iPad is supported here, too. Meanwhile, the $299 Magic Keyboard remains jaw-droppingly expensive, but it provides a high-quality typing experience for such a compact keyboard. I’ve been happily using it to draft this review and have used it to write plenty of other things in the past. In fact, with the comfortable keyboard and trackpad this accessory offers, I was able to do just about all of my job using the Air. If you’re someone who makes a living writing, it’s a must-have accessory.

The $129 Apple Pencil is an excellent stylus, but I think you really need to know what you’re going to do with it for it to be worthwhile. It’s comfortable to use and extremely responsive, but unless you really want to take handwritten notes with your iPad or have serious visual arts chops, it’s inessential. But there are loads of wonderful drawing and note-taking apps available for the iPad, so if you are an artist, it’s an excellent tool.