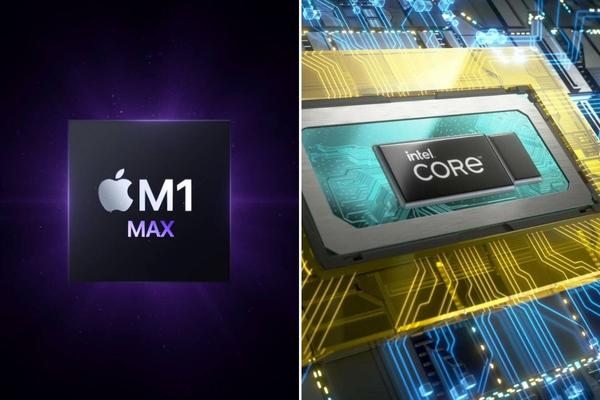 Apple’s new M1 Ultra announcement has sent huge waves in the industry. The company’s new chip is powerful enough to go head-to-head with some of the most powerful desktop chips from Intel and AMD. While the M1 Ultra is the most powerful Apple silicon to date, there’s no denying that the company’s M1 Max is still the real MVP in the notebook space. In this article, we’re going to take a look at the Apple M1 Max vs Intel 12th gen Alder Lake comparison to find out which one’s better.

We’ll only be taking a look at the Apple M1 Max vs Intel 12th gen Alder Lake H-series notebook CPU comparison. Alder Lake H-series has the most powerful 12th gen mobile chips from Intel that are capable of going against the raw performance of Apple M1 Max. The top of the line 12900HK’s performance is also comparable to the general performance of the 12900K chip. Intel’s 12th gen lineup also has P and U-series chips, but they’re reserved for relatively low-powered and thin & light notebooks. With that out of the way, let’s get started with the comparison.

SpecificationsPerformanceWhich one should you buy?

Here’s a quick look at the specifications of the Apple M1 Max chip:

Below is the list of Intel 12th gen Alder Lake H-series processors along with their specifications:

As you can see from the specs table, both Apple M1 Max and the Alder Lake H-series chips come with a hybrid CPU architecture. This allows all the CPUs in this comparison to have separate performance and efficiency cores that handle different workloads. We highly suggest you check out our Intel Alder Lake hub page to learn more about how the P and E cores operate. While the M1 Max chip has fewer cores than some high-end Alder Lake chips like the Intel Core i9-12900HK, it’s still likely to have better multi-core performance due to the availability of more Performance cores.

Even though we’ve listed all the Alder Lake H-series chips in the specs table, we’ll primarily be focusing on the Intel Core i9-12900HK chip from the Alder Lake family. That’s because the Core i9-12900HK is the one that comes close to matching the general performance of the M1 Max chip. Another reason behind picking the 12900HK is that we’ve also reviewed this particular chip, so it’ll make it easier for us to use our own benchmark numbers to compare the two.

Starting off with the Geekbench 5 score, both Apple M1 Max and the Intel Core i9-12900HK scored very similar points in both single as well as multi-core tests. That being said, the Apple M1 Max marginally beats the Intel Core i9-12900HK. The M1 Max managed to score 1784 and 12695 in the single and multi-core tests, respectively. The 12900HK, on the other hand, scored 1774 and 12630 in the same tests. These results are also reflected in many of the real-world tests, although the performance is more or less similar for both chips.

The same is true for the Intel Core i9-12900K desktop CPU too. As we highlighted in our Intel Core i9-12900K review, Intel’s top-of-the-line CPU also scores pretty much the same. So if you are planning to buy an M1 Max-powered Mac Studio desktop then you can expect both machines to have almost the same level of performance, although your Intel machine’s performance will also depend on the kind of GPU you’re using.

The Apple M1 Max has a huge advantage over the Intel Alder Lake 12900HK when it comes to power efficiency, though. Intel’s Alder Lake consumes as much as 110W or more under load, whereas the M1 Max comfortably sits under 45W. That’s a significant difference that will greatly affect the overall battery life of the notebooks. Sure, you’re probably not going to venture too far from a power outlet while using a hefty gaming laptop like the MSI Raider GE76 with the 12900HK, but it’s definitely a tough pill swallow when you can carry the M1 Max-powered MacBook Pro notebook around. The best thing about using the MacBook Pro is that you don’t have to stay plugged in to run resource-intensive tasks.

Other 12th gen chips from Alder Lake P and U series will be able to compete with the M1 Max in the power efficiency space. But it goes without saying that those chips are nowhere close to matching the general performance of the M1 Max. All things considered, we think it’s safe to say that the M1 Max is the clear winner when it comes to power efficiency.

Which one should you buy?

Intel’s new 12th gen Alder Lake chips offer significant improvements over anything we’ve seen from the company in the past. Even when compared with Apple’s best mobile chip for MacBook Pro notebooks, the 12900HK is able to hold its own without any issues. Intel still needs to do a lot of work in the power efficiency space. Sure, there are dedicated chips to offer better battery life on notebooks, but you’ll miss out on a lot of performance with those chips. When it comes to the general performance, though, we think there’s a lot of value to be found in both Intel and Apple hardware.

It also comes down to personal preference when it comes to buying an Intel-based machine or a MacBook Pro with Apple silicon. If you are a creative professional, especially one who’s invested deep in Apple’s eco-system and macOS, then we think you’ll probably want to stick to the M1 Max-powered MacBook Pro. But if you are someone who wants the best gaming performance from a portable PC, then the 12900HK Alder Lake chip is arguably the better pick.

That sums up this particular comparison between the Apple M1 Max and Intel 12th-gen CPUs. If you are planning to buy the new Mac Studio with an M1 Max chip then do consider checking out the Intel 12th-gen CPUs too. There’s a good chance you’ll be able to build a relatively cheaper Intel-based PC and get the same level of performance. Alternatively, you can also check out the Mac Studio deals page to see if you can save some money on your purchase. We also have a solid collection of the best Mac computers that are out there, so be sure to it out too.

how to hold phone while gaming