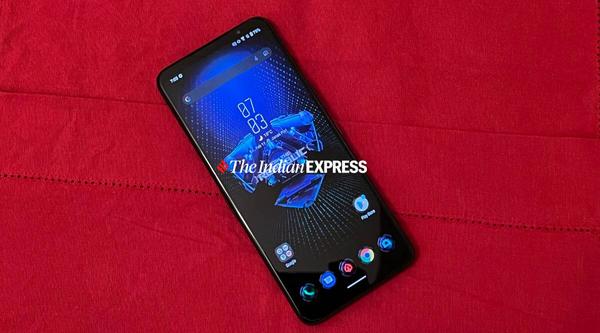 My iPhone 13 mini and ROG Phone 5s are poles apart in the way they look and feel. Although I am not comparing the two devices, the ROG Phone 5s leans heavily on the idea that gaming phones look a certain way. None of the “minimalistic” principles applies to the ROG Phone 5s. Its design is identical to the ROG Phone 5 I reviewed last year, with aggressive angular lines and the dot matrix design first seen on the ROG Zephyrus G14. But I must say the build quality is top-notch and you won’t regret paying Rs 49,999 for this phone.

https://images.indianexpress.com/2020/08/1x1.png I hope and wish in future to see a miniature version of the ROG Phone 5s that has the same guts as the current model but only in a more compact shell. (Image credit: Anuj Bhatia/Indian Express)

The front panel uses the Gorilla Glass Victus, while the rear has Gorilla Glass 3. The front of the phone has thick top and bottom bezels to prevent accidental touches during gaming sessions but at the same time, they make the device easier to hold in landscape mode. The advantage of this design implementation means you get proper front-facing speakers (more on that later).

The port selection is better than any other smartphone I have reviewed, including two USB-C ports to both the front and right edge of the phone. It’s a clever feature, allowing you to charge the phone while holding it horizontally, but the rubber clasp feels cheap. The proprietary connector can also be used with an AeroActive Cooler 5 fan. Unlike many high-end smartphones on the market, the ROG Phone 5s has no official IP rating for water resistance.

The ROG Phone 5s comes with a 6.78-inch panel FHD+ AMOLED panel that refreshes between 60 and 144Hz. I have always told my readers that high-refresh-rate screens on smartphones benefit the most when you are playing a game with visual fidelity or scrolling through articles. I played Call of Duty Mobile on the ROG Phone 5s and the 144Hz display option and the touch sampling rate of up 360Hz does not certainly feel like a “luxury feature” to me. But a 144Hz display on a phone? That’s insane. If a general-purpose smartphone had a 144Hz display option, I would have said I don’t see the purpose of having a super ultra fast lightning display. 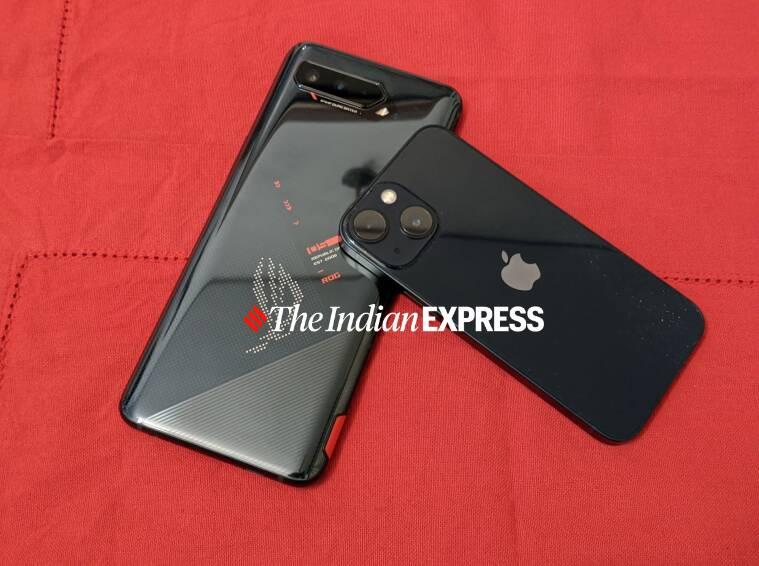 The 144Hz display on the ROG Phone 5s is first-rate and there is no doubt about it. It’s a gorgeous looking 1080p display with great colours and brightness. And yes, it’s fast. With a peak brightness of 1200 nits and with refresh rates of 144Hz, it’s also one of the brightest screens used on a smartphone. The display is taller than usual with a 20:4:9 aspect ratio and playing games or watching HDR 10+ content feels thoroughly enjoyable.

One question I always had in my mind while using the ROG Phone 5s was about its portability. I get that if you are gaming with two hands, this form factor works. But in everyday use, the phone becomes a bit uncomfortable to use, like any other extra-large sized smartphone. This thing is heavy and huge at 238 grams. No matter what justification Asus comes with, you need to have large hands to use the ROG Phone 5s. I hope and wish in future to see a miniature version of the ROG Phone 5s that has the same guts as the current model but only in a more compact shell.

The front-facing stereo speakers offer a richer and wider sound than any smartphone I have used to date. Each speaker has its own tweeter and the result, well, is stunning. You also get a 3.5mm headphone jack with a hi-fi grade ESS DAC and headphone amp. In fact, you can playback audio files at up to 24-bit/96kHz or 24-bit/192kHz when paired with a Hi-Fi audio output device. The four microphones are excellent and I had no trouble taking interviews via Zoom and Microsoft Teams.

Under the hood, the ROG Phone 5s is powered by a Snapdragon 888 Plus processor. This is a 5nm chip from Qualcomm and performance has no issue as expected. The processor isn’t any faster than the Snapdragon 888, Qualcomm’s last-generation flagship chipset, but the main cortex-X1 performance core clocked to 3GHz rather than 2.84GHz. Paired with 8GB RAM and 128GB storage (Asus provided the model with this configuration), this is a capable gaming smartphone. From playing Battleground Mobile to scrolling a news piece on indianexpress.com, the chip is fast measured by both benchmarks and real-world use. The 5G-capable ROG Phone 5s is undoubtedly a fast phone – but the chip inside the phone isn’t the latest Snapdragon 8 Gen 1, which will power this year’s top-end flagships including the OnePlus 10 Pro and Galaxy S22 Ultra.

The ROG Phone 5s is blazing fast, but what separates this phone from other smartphones is the AirTrigger tech that uses ultrasonic sensors to turn the bumpers of the device into touch-sensitive triggers. Meanwhile, the AeroActive Cooler 5 accessory (which is sold separately) has two physical AirTrigger buttons of its own, and comes with the kickstand. Asus sells a bunch of accessories that will enhance your gaming experience on the ROG Phone 5s.

The phone runs Android 11 with Asus’ ROG UI. It’s different from ZenUI with a focus on gaming. Asus gives you the option to switch to ZenUI, in case you prefer a simplistic experience. In fact, I liked ROG UI a lot. The Armoury Crate app, which also includes the X-mode, improves performance drastically and tweaks are visible when you play games such as Genshin Impact. I haven’t noticed heating issues, but the phone does get hot after a prolonged session.

The ROG Phone 5s has a huge 6000mAh battery, which sounds insane, but you need a beefy battery to power the phone’s 144Hz display. I am a heavy user, and this phone lasted over a day after hours of browsing and watching movies.

I won’t say the ROG Phone 5s’ weakness is its camera, but I do feel that the triple-rear camera system is not comparable to other flagships in the market. You might counter-argue that the cameras are good for a gaming smartphone, I feel if I am spending over Rs 50,000 on a phone, the camera experience matches that of phones aimed at the mass market. The whole debate over “gaming smartphone cameras” vs “mainstream smartphone cameras” should not exist.

Anyways, the ROG Phone 5s Pro uses a 64MP Sony IMX686 wide-angle sensor, a 12MP ultrawide, and a 5MP macro camera on the back. Photos captured by the main camera look great outdoors. You get Instagram-ready shots with natural colours. The phone’s main camera also captures shadows well, which surprised me. The results are quite stunning. In low light conditions, however, I noticed the picture quality falls a bit as noise starts creeping in. That’s not to say, the phone cannot take good low-light shots. Meanwhile, the ultra-wide camera is a bit off. I got some stunning landscape shots but beyond that, I didn’t find it useful. I terribly miss a dedicated telephone lens.

In terms of video quality, the ROG Phone 5s left me impressed. I mostly shot videos in 1080p and they turned out to be of excellent quality. If you are a content creator, you have the option to shoot videos in 4K@60fps and at 8K@30fps. The phone’s 24MP camera is good enough for selfies and video chats.

Asus ROG Phone 5s review: Should you buy it?

The ROG Phone 5s is quite a device. It has one of the best displays on a smartphone, sheer power, gaming-centric tweaks, and hours of battery life. My only concern is that it’s a large phone and its camera system is not comparable to other high-end phones. The ROG Phone 5s shows Asus’ faith in developing a gaming-focused smartphone even when every smartphone is a gaming device. A phone like this is total overkill for most but it does have a niche audience who are open to the idea of a mobile gaming rig in the smartphone form factor.

is asus phone good for gaming