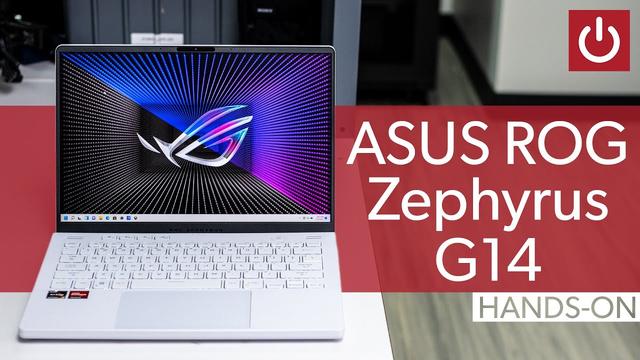 The redesigned ROG Zephyrus G14 continues to standout by offering a ton of performance, an eye-catching AniMe Matrix screen, and a new 16:10 screen and webcam.

RetailerPriceDelivery$1649.99FreeViewPrice comparison from over 24,000 stores worldwide

The original Asus ROG Zephyrus G14 turned the laptop world on its head with an unheard-of performance-to-weight ratio for its day. Two years later, Asus is back with a redesigned ROG Zephyrus G14 that again challenges your notion of just how much performance you can jam into a tiny gaming laptop.

Much of this comes from its all-AMD design. Asus blends AMD’s ultra-efficient new Ryzen 9 6900HS processor and Radeon RX 6800S graphics into the revamped ROG Zephyrus G14. Because both CPU and GPU come from the same parent, they’re far more likely to shift power back-and-forth intelligently than, say, an Intel CPU and an Nvidia GPU.

Asus helps this partnership by using a vapor chamber cooling design rather than conventional heat pipes. Vapor chambers share a larger surface cooling area between the Radeon and Ryzen than a traditional heat pipe system, and benefit CPUs and GPUs that closely share power and cooling.

More importantly Asus finally gets a chance to fix the one feature that’s always been a deal breaker on the original G14 laptop: A webcam!

This review is part of our ongoing roundup of the best laptops. Go there for information on competing products and how we tested them.

Besides the new CPU, GPU, and 16:10 screen, the most exciting change may be the Windows Hello webcam Asus has FINALLY integrated into the Zephyrus G14. Although it’s “just” a 720p camera, we found it about 1,000 percent better than the first and second generation models that, uh, had no web cam. Yes, no webcam on a laptop. Why? Asus introduced the original G14 in the innocent days of January 2020 and said an integrated webcam would never match an external one, so just use a better option. Besides, do you really use your webcam that much? Ahh, such naïve 2019 thinking. Obviously the company didn’t foresee the Zoom-filled hellscape our lives would become. Now finally, after two years, the company is integrating a webcam, giving the G14 the utility it should’ve had from day one.

The camera has a somewhat tight angle of view, which means you’ll have to be dead center for Windows Hello facial recognition to work. And while the quality doesn’t match laptops with 1080p webcams such as the MSI GE76 Raider, it’s about what you expect and again, a huge improvement over not having a webcam at all.

We should also talk on the speakers of the laptop, which are acceptable for a laptop this small and hardware-packed. It’s far from atrocious but not something you’ll call someone over to listen to, which basically means the audio is fine.

What about USB 4 and USB PD?

AMD’s Ryzen 6000 CPUs will be the first chips with USB 4 support outside of Intel’s and Apple’s chips, which both support USB 4 via Thunderbolt 4. AMD’s USB 4 implementation will the first we can think of that didn’t start as Thunderbolt-based. For AMD, USB 4 will support the full implementation with up to 40Gbps transfer rates, PCIe tunneling, external graphics support, and DisplayPort 1.4a HBR3, as well as Thunderbolt support (for laptop vendors who receive certification). Basically, we’re still waiting to see how the promised USB 4 world that didn’t start on Thunderbolt shapes up.

With a 240-watt power brick, you might have expected the laptop to support the newest USB Power Delivery specs and exclusively charge using USB-C, which can now reach 240 watts. Asus officials, however, say they decided against a pure USB-C charging system due to the inefficiencies of it right now. Asus didn’t totally pass on USB-C charging though. Like many of its laptops, it will charge through its USB-C port at up to 100 watts, so if you want to leave the larger 240 brick at home while on the road, you can do so provided you get by with slower charging. 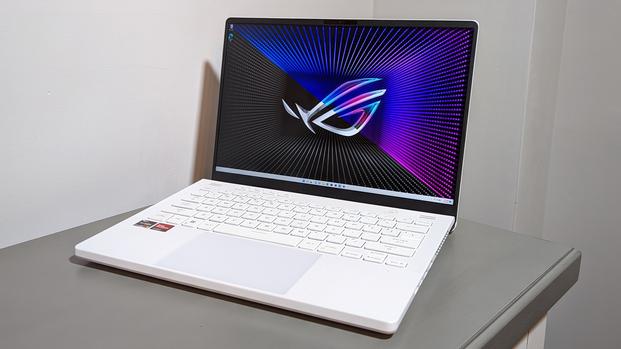 The trackpad is glass smooth and very decently sized though and we had no complaints about it.

For most laptops, the only real upgrade option is storage. Content creation and gaming laptops go one step further with memory, sometimes offering expansion storage. Being a very compact laptop, you get a single full-size M.2 drive that can be replaced by removing the bottom panel of the G14 (which is attached with Philips-head screws).

Is that a deal breaker? It very much depends on what you do, how much RAM you need, and whether you need bandwidth or capacity. If you’re not the sort of person who typically upgrades the memory in your laptop, don’t sweat it whatsoever.

The real excitement of the newest ROG Zephyrus G14 is how it performs. We’ll kick that off with Cinbench R20, which is a 3D rendering benchmark based on Maxon’s Cinema4D engine. The more CPU cores you have, the better the performance. We actually tested the ROG Zephyrus G14 in its default “performance” setting as well as its “turbo” setting while plugged into the wall.

Although it can’t dethrone the much larger and much faster MSI GE76 Raider with its 12th-gen Core i9, the performance for the G14 is nonetheless impressive given its size and weight. For example, the 3.7 pound laptop (it’s even lighter without its nifty miniLED AniMe lid) outperforms the heavier and thicker ROG Strix G15 Advantage with its Ryzen 9 5900HX CPU.

Although PC makers and CPU makers like to entice consumers with CPU cores, the vast majority of applications that people run don’t actually use all of those cores. It’s also important to look at single-threaded performance using Cinebench R20 which gives you a better indicator where the G14 might run Photoshop or even browse the Internet.

The single-threaded performance puts the G14 in good company and again confirms that most people won’t notice the difference between a brand-new laptop and one a generation behind it. Laptops such as the MSI GE76 Raider and the GF76 Katana with their 12th-gen CPUs, however, would disagree somewhat as they clearly offer a crisper feel in lightly threaded tasks. Whether you can feel that or not though is update for debate. You basically won’t be hurting for performance in the new G14.

Most of the tests above are fairly short loads so we also try to gauge the laptop’s performance running a lengthier task. We use an older version of Handbrake to convert a 30GB 1080p video using the Android Tablet preset. On default, the G14 is basically dead even with the thicker and heavier ROG Strix G15 Advantage Edition and set to Turbo, it again punches outside its weight class.

Looking for a somewhat lighter task, we also use UL’s PCMark 10. It measures the performance of a PC running multiple tasks in text editing, photo editing, spreadsheets, and some content creation. Although PCMark 10 doesn’t use commercial applications, its use of open-source free software at least gives us a good feel for how a laptop performs that’s closer to reality. The result is again quite good for the Zephyrus G14, which is again performing far outside its weight class. The results also show that for the most part, you’re unlikely to really feel that much of a difference between any modern laptops in these tasks. Obviously, the MSI GE76 Raider would disagree. It’s clearly the fastest which means it would likely be a little more crisp.

Gaming performance on the Zephyrus G14 is clearly important. We say that because if you’re going to pay for a laptop with a powerful discrete GPU, you probably want to use it. AMD’s new Radeon RX 6800S is essentially a power-optimized version of the Radeon RX 6800M in the ROG Strix G15 Advantage Edition. You give up some performance to get into a laptop that’s so much thinner, but the tradeoff is likely worthwhile if you value portability.

Synthetic benchmarks may reliable, but they’re hard to relate to an actual game, so we run games to gauge performance. Not everyone plays cutting-edge games so we use the 2015-era Rise of the Tomb Raider in DirectX 11 mode as a stand-in for older games. Clearly, the bigger and more powerful laptops with higher wattage GPUs win this, but the ROG Zephyrus G14 is again doing quite well considering its weight class. It’s basically about dead even to a GeForce RTX 3070 Laptop GPU with a 140 watt TGP, and can outrun a GeForce RTX 3080 Laptop GPU with its wattage limited to 100 watts.

We did want to get a feel for the performance of Asus’s laptop on a more strenuous game, so we use Metro Exodus set to its Extreme preset. The ROG Zephyrus G14 again offers exceptional performance for its weight, and again is neck and neck with the GeForce RTX 3070 and 3080 GPUs.

Our final test looks at the battery life of the Zephyrus G14while playing a 4K video in airplane mode, with ear buds set to 50 percent volume and the screen brightness set between 250 nits and 260 nits. You may think it’s all about the CPU or GPU for a video rundown test but the size of the battery as well as how much power the screen consumers matters just as much.

Asus still manages to get a decent 74 watt hour battery inside the G14 despite its small frame, which gives us just over six hours of runtime. That’s fair battery life for a laptop with a QHD+ screen but it can’t quite match the XPG Xenia 15 KC, which also has a QHD screen as well as a battery that’s 27 percent larger.

We can’t stress enough just how much the original Asus ROG Zephyrus G14 wowed everyone in January of 2020. At the time, it easily destroyed Intel’s hulking 9th-gen gaming notebooks by offering far more performance in a very compact and very light laptop. As arguably the first AMD premium gaming laptop of the day, it also helped cement that an AMD laptop could be as good or even better than its Intel-based rivals.

Today, the Asus ROG Zephyrus G14 faces far stiffer competition, but its improved in-your-face AniMe Matrix, impressive AMD CPU and GPU combo, and far better 16:10 panel and webcam honestly removes any issues we had with the original version. It’s certainly not a low-cost alternative like the original G14, with the new model sporting a price tag of $2,500, but you’re getting one of the smallest, fastest, and literally flashiest laptops we’ve ever seen. The Asus ROG Zephyrus G14 punches far above its weight class.

how much gigabytes does an rog gaming phone have