Best gaming phone 2021: The smartphones with a killer gaming edge

While almost every phone on the market can play games, with flagship phones playing them very well indeed, that doesn’t necessarily make them great gaming phones.

The best gaming phones make playing games on the go an absolute priority, with common elements such as camera quality and even tasteful design taking a back seat. Yes, such phones will tend to be powerful, but a great gaming phone will give you so much more than raw polygon-pushing power.

A great gaming phones also provide game-focused UI elements, advanced cooling and battery features, responsive displays, custom control options, and even RGB lighting. It’s true that no ‘best-looking smartphone’ list is ever likely to include a gaming phone, but that’s really not the point.

All of the phones on the following list will give you an edge when playing competitive games like CoD Mobile, PUBG: New State, League of Legends: Wild Rift, and more. These are the best gaming phones you can buy in 2021.

READ NEXT: These are the best gaming monitors to buy

Finding the right gaming phone for you can seem like a tricky task. Gaming phones aren’t as widely available as non-gaming phones, and they’ll tend to go out of stock more often. These are niche devices after all, but to help you find a suitable handset, we’ve rounded up everything you need to know when buying your next gaming phone.

This is the most important question to ask yourself from the outset, especially since most phone buyers won’t necessarily need a gaming-centric handheld. If gaming is just one of many things you like to do on your phone – and a fairly inconsequential thing at that – then you’re almost certainly better off with a normal phone of some kind.

Even if you play a lot of games, the answer is probably still ‘No’. A diet of predominantly casual or offline games don’t require the specific strengths that a gaming phone brings to the table. Gaming phones are really for those who play a lot of intense, generally multiplayer, competitive mobile games with complex and customisable control schemes. Think online shooters such as CoD Mobile, or mobile MOBAs like Wild Rift.

READ NEXT: These are the best gaming chairs to buy right now

Gaming phones generally utilise the exact same CPUs and GPUs as most regular flagship smartphones. Decent power is mere table stakes here. What a gaming phone will give you that an iPhone won’t is a design that’s fundamentally built around playing games. They’ll often be bulkier and more rounded so that they’re comfier to hold in landscape orientation and they’ll have mappable physical controls to complement the usual touchscreen inputs.

Gaming phones will tend to have enhanced cooling systems and capacious batteries, both incorporated to fuel extended gaming sessions. While recharging doesn’t tend to be any faster than non-gaming flagship phones, gaming phones will often let you bypass the battery altogether so you can play when plugged in without things getting toasty, and you might be able to plug it into the mains in landscape, too.

Finally, gaming phones will often give you custom UI overlays that grant access to high-performance modes, control customisation, gaming-focused do not disturb profiles, and more.

The best gaming phones to buy in 2021

The Nubia Redmagic 6S Pro is the best all-round gaming phone on the market right now. For your money, you get class-leading performance via the Snapdragon 888 Plus processor, which is a bit of a rarity, and this is complemented by ample RAM and storage configurations as well.

It’s also got the most fluid display in the business, with a 165Hz refresh rate and a blisteringly responsive 720Hz touch sampling rate for instantaneous touch inputs. It’s also a punchy, colour-accurate 6.8in AMOLED display, too. Elsewhere, the Redmagic 6S Pro’s Turbo Fan cooling system keeps the heat down, while its excellent air triggers really take your gaming to the next level. 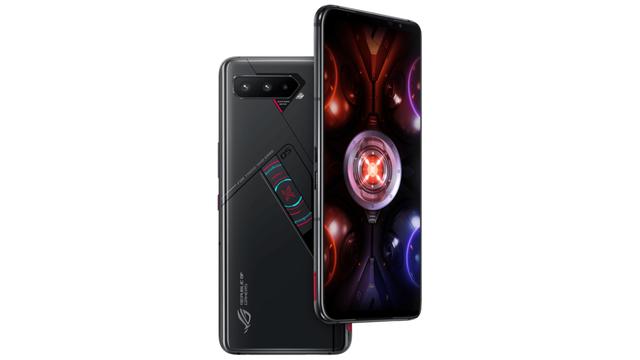 All this, and the Nubia Redmagic 6S Pro starts at just £519, which is less than half the price of our ‘money-no-object’ pick, the Asus Rog Phone 5s Pro, featured below. The truth is, the Redmagic 6s Pro could quite easily occupy all of our choices on this list – it’s just that good.

If your budget can’t stretch to the pricier Redmagic 6S Pro, then Nubia also makes an excellent value alternative in the Redmagic 6R. A handest that’s easier to live with on a day-to-day basis than its more capable brother, thanks to a more compact and restrained design, it packs a similar punch with a Snapdragon 888 processor and a rapid 6.67-inch 144Hz display. You still get dedicated trigger buttons too, as well as the benefits of Nubia’s custom UI.

There are a couple of concessions that committed gamers will want to be aware of, however. The Redmagic 6R’s 4,200mAh battery is a tad small for a gaming phone, while the presence of a hole-punch notch does get in the way somewhat.

But for the money, you won’t be able to find a better-equipped gaming phone than the Redmagic 6R.

If money really is no object in your pursuit of gaming perfection, then the Asus ROG Phone 5s Pro certainly goes the extra mile.

It matches the Nubia Redmagic 6S Pro for pure power, thanks to a range-topping Snapdragon 888 Plus processor, which it pairs with an absurd 18GB of RAM and 512GB of storage. It’s got a sharp set of physical trigger buttons, too, which really grant a gaming edge. The ROG Phone 5s Pro’s 6,000mAh battery is absolutely huge, and in our tests got us through heavy gaming sessions more comfortably than all of its rivals.

The icing on the cake is a bundled strap-on cooling fan, which keeps the phone at peak performance for longer, as well as supplying an extra pair of physical remappable buttons.

The Lenovo Legion Duel 2 is a fast, well-equipped gaming phone with a Snapdragon 888 processor and dedicated shoulder buttons that can be mapped to many games’ key functions.

But what really stands out from the pack here is the degree to which it’s been designed around landscape usage. Its display is the biggest on this list at 6.92in, as well as being suitably rapid at 144Hz with a 720Hz touch sampling rate.

Even its body has been designed with landscape use in mind, with the camera hump placed right down the middle of the phone. This makes it quite awkward to use like a ‘normal’ phone, so it really is about that landscape content. Lenovo has even placed the selfie camera into a pop up mechanism on top of the phone, again in a landscape orientation to make it streamer-friendly.

what is the best gaming phone in 2021