Home gaming phone Best iPhone 2021: Which Apple smartphone is right for you? 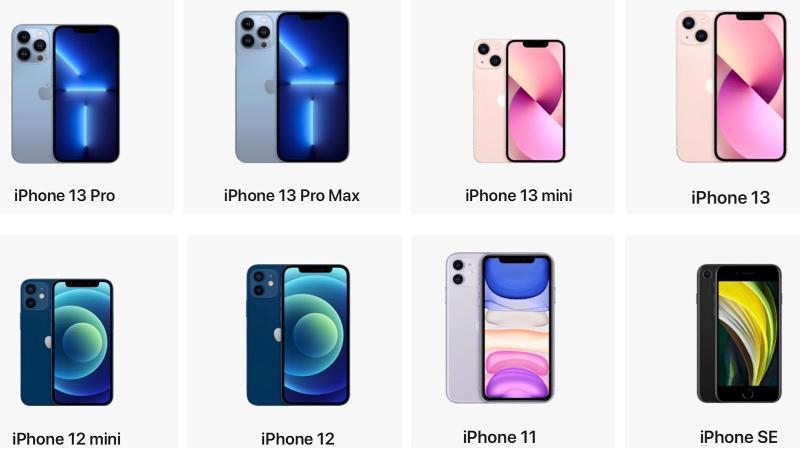 Best iPhone 2021: Which Apple smartphone is right for you?

With Apple updating its smartphone lineup quite regularly, it can be difficult to decide which is the best iPhone for you. Sure, you can just pick up the latest model, but with the hefty price tags that usually follow iPhones off the assembly line, you could end up paying more than you need to.

Instead, it can be worthwhile to dive into Apple’s back catalogue and choose a handset from the last few years. While they're not quite top of the line, these iPhones still hold up to their modern counterparts and will be far kinder to your wallet, too.

Don’t worry – if you have your heart set on one of the latest iPhones, we include them here too. After all, if the price isn’t an object, why not get the most up-to-date model? Either way, we’ve gathered a range of options below that should suit any budget.

If you’re not quite sold on Apple just yet, our buying guide also goes through the benefits of choosing an iPhone, as well as things to consider before adding one to your basket. Otherwise, read on to see our top picks of the best iPhones you can buy right now.

READ NEXT: Pair your new iPhone with one of these top Macbooks

Is Coke better than Pepsi? Breakfast superior to dinner? Cats more loveable than dogs? As with all of these great philosophical debates, a lot of this decision is going to come down to personal taste. Each operating system has its benefits, as do the phones that use them, so it’s less about which is better, and more about which suits you best.

Since you’re here, you probably have at least a passing interest in iPhones, so let’s go over some of their most attractive features. The biggest draw for choosing an iPhone is the Apple ecosystem. More than just a fancy term for Apple’s family of devices, this concept is designed to make integration between your Apple Mac, iPhone, iPad or Apple Watch as seamless and user friendly as possible.

Such tools include the Universal Clipboard, which allows you to copy content such as text, images or videos on one device and instantly paste them on another. There’s also the Continuity Camera, which makes it easy to take a photo or scan a document with your iPhone, and immediately bring it up for viewing or editing on your Mac.

If you already own Apple devices, or are looking to replace others that you own, the ecosystem is definitely a good reason to consider purchasing an iPhone. Not only do you get the integration features mentioned above, but the UI conformity across devices means that there’s no fumbling around getting to grips with new layouts, or struggling to find certain settings.

Indeed they will. With the release of iOS 15 (the newest version of iOS) came the news that any device capable of running the previous version, iOS 14, would be able to upgrade to iOS 15 without any problems. There are, of course, older models that won’t be eligible – the furthest back support goes is the iPhone 6S, but we haven’t included anything that old in this list.

READ NEXT: Our pick of the best iPads you can buy

However, if you want the best of the bunch, or would like something future-proof to invest in, then you should expect to spend a bit more for the privilege. Depending on what storage capacity you select, prices for the latest line of iPhones can be anywhere from £650 to £1,400, so brace yourself accordingly.

READ NEXT: The best Samsung smartphones to buy

The best iPhones to buy

It probably comes as little surprise that something with both ‘Pro’ in its name is absolutely packed with features. Like the iPhone 12 Pro that preceded it, the iPhone 13 Pro (and Pro Max) is the ultimate version of Apple’s latest flagship, with just enough going for it to warrant the extra cost.

The biggest reason to choose this over other models is just how exceptional the camera is. Like the rest of this year's iPhone 13 range, the Pro Max shoots 12MP images from all of its cameras, including the front-facing snapper.

What sets the 13 Pro and Pro Max apart from the cheaper models, however, is a larger sensor and superior image stabilisation, which when combined deliver clearer and more vibrant pictures. Add the fact that you can shoot 10-bit 60fps Dolby Vision HDR footage, and you can make home videos look like big-screen blockbusters. Yet again, it's also a 5G-capable iPhone and the 6.1in AMOLED display is astounding – it’s bright, vibrant and perfect for watching movies on the go. The iPhone 13 Pro is pretty much the complete package and quite simply the very best iPhone that money can buy. 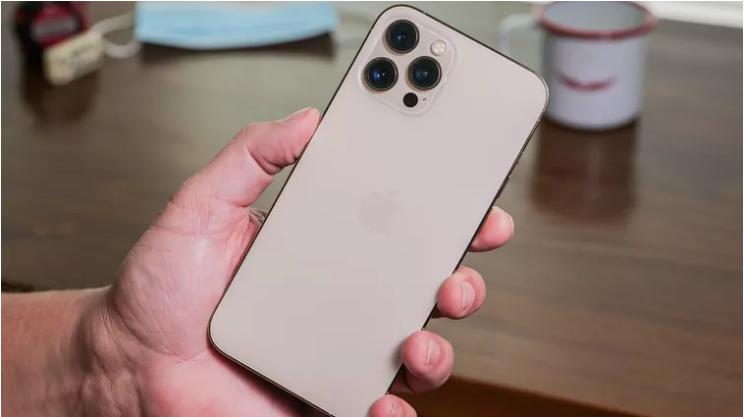 More pocketable than the 12 Pro Max, and more wallet-friendly than the Pro, 2020's standard iPhone 12 is still an exceptional phone, striking the perfect balance between features, size and value.

As usual, the headline feature of the iPhone 12 is the camera. This model shoots 12MP images from the two cameras on the back and the selfie camera, and allows you to film 10-bit Dolby Vision footage – though only at 30fps. An improvement over the previous iPhone 11, all three cameras now feature Night Mode photography with Deep Fusion, as well: perfect for when lighting conditions aren’t ideal.

The AMOLED screen is exceptionally bright, and produces colours that appear to leap straight off the screen. Though more hand-friendly than the Pro Max, it’s still a decent size too, and support for all of the main HDR formats – HDR10, HDR10+, HLG and Dolby Vision – meaning that you can comfortably watch films and shows in crisp high-def.

If you’re more concerned about getting value for your money than having all the bells and whistles, then the 2020 iPhone SE is the one for you. What may be surprising with such a low price, is that the iPhone SE (2020) is just as powerful as the iPhone 11, easily outstripping similarly-priced competitors like Google’s Pixel 4a and Pixel 4a XL in our speed tests.

As well as making any app or game run smooth and stutter-free, this processing power comes across great in video recording, too. The same A13 Bionic chip used in the iPhone 11 is employed to keep exposure even with Smart HDR, as well as stabilise images in 4K footage recorded at 60fps. In such a compact, pocketable phone as this, these features are simply astounding.

We held off on awarding the iPhone SE (2020) five stars in our review due to its lacklustre battery life, however. It stands to reason that all this power in such a small package would have concessions somewhere, but the results of our tests were disappointing nonetheless. Still, if you don’t mind having a charger handy during the day, then this is absolutely the best value for money you can get from an iPhone.

The iPhone 13 Pro Max is more of an iterative update on its predecessor, but that doesn't make it any less stellar. First, it has a larger screen than the chart-topping iPhone 13 Pro above, at 6.7in to 6.1in, while the battery life has been boosted to 4,352mAh. The latter translated to a gargantuan 23hrs 30mins, which is almost three hours longer than the iPhone 12 Pro Max.

Meanwhile, CPU performance has been improved, pushing it ahead of the Android competition, and there's good news for mobile gamers: frame rates are no longer capped at 60fps, meaning you can make the most of the five-core GPU. In short, this is a blisteringly fast phone that will remain so for years.

Apple has also tweaked the cameras, increasing the size of the sensor and aperture for better snaps in low light, but it's not a massive improvement on the iPhone 12 Pro Max. Don't get us wrong, though, because the camera performance is still superb. And that's the iPhone 13 Pro Max in a nutshell: even with just a few changes, it's still the best all-singing, all-dancing iPhone you can buy.

With the iPhone lineup refreshing so regularly, it can be a savvy move to simply wait for the new models to come out and pick up previous versions at a fraction of the price. Such is the case with the iPhone 11. Like with the iPhone SE, the A13 Bionic chip remains one of the fastest flagship chipsets on the market, ensuring swift and fluid functionality for years to come.

This horsepower is put to good use, particularly when it comes to the cameras. Employing the same set-up as the 11 Pro and the 11 Pro Max (albeit, without the 2x telephoto zoom lens), the iPhone 11 shoots 12MP images from both cameras on the back, as well as the front-facing selfie camera. In conjunction with the impressive Night Mode, these cameras delivered sharp, clear images, even in poor lighting conditions.

The cameras are also exceptional for recording video, capturing fully stabilised 4K footage at 60fps. In addition to this, the A13 Bionic chip allows enough power for the extended dynamic range mode to be used at 4K 60fps as well, where before it only supported up to 30fps. It may not be hot off the production line, but the iPhone 11 is still a very accomplished handset, and well worth considering if you don’t want to spend more than £500.

Though it may seem worlds away from the latest models, the iPhone 8 isn’t out of the game just yet, and is still easily the best contender if you’re looking to pick up a decent iPhone for as little as possible.

So, what’s to like? Well, apart from the price, this phone is compact enough to be easily used one-handed, has a decent battery life, and the A11 Bionic chip, while not up to speed with the latest iterations, is still powerful enough to handle a variety of intensive tasks. Best of all, the iPhone 8 is able to run the latest iteration of Apple’s operating system, iOS 14.

As a second-hand phone that’s been refurbished via the Amazon Renewed storefront, this model is eligible for a replacement or refund within the first year if it doesn’t look like new or operate as expected. Going one step further, you can also purchase accidental damage cover, either monthly at £1.79 per month, or with a one-off payment of £21 for the year.

is iphone 11 a gaming phone