Home gaming phone Black Shark 4 Pro Smartphone Has Shoulder Buttons And RGB, But Is Not Only For Gamers

Black Shark 4 Pro Smartphone Has Shoulder Buttons And RGB, But Is Not Only For Gamers

Mobile games have really come into their own. What used to be seen as a casual game genre has become a fully respectable genre with titles such as Genshin Impact, Monument Valley, Fantasian, and many more. As the fidelity and quality of mobile games increase, demand for a smartphone that’s designed for the best gaming experience surfaces as well. This is the niche that Black Shark fills, and the brand’s latest model, the Black Shark 4 Pro, further refines the mobile gameplay experience for gamers.

It is clear from the specs that the Black Shark 4 Pro is able to handle any game that’s available on the market. Genshin Impact on the highest settings runs consistently at 60 FPS, and PUBG Mobile at 90 FPS, for example. The device runs on Qualcomm’s octa-core Snapdragon 888 5G chipset, and features a 6.67-inch AMOLED display with 144Hz refresh rate. Thus, not only will the visuals look sharp and vivid, the refresh rate means even when there’s a lot of action on screen, users will be able to see every bit of movement.

This new model keeps the best features of the Black Shark 4 (see TikTok video below), the easy-to-access shoulder buttons and the Magic Press. Both are customisable and aren’t restricted in their usage to just games.

Magic Press, Black Shark’s dual press-sensitive display technology, continues to be present in this latest model. This feature allows for up to seven levels of press sensitivity and customised mapping, which means that a mistouch is less likely to occur, and at the same time, users are able to more precisely fine-tune the controls of mobile games. This is a feature that can be hard to wean off once you get used to the convenience it brings.

Black Shark also taps into how smartphones are held like controllers while mobile gaming with the magnetic pop-up triggers for the Black Shark 4 Pro. By toggling a switch, two physical shoulder buttons pop up, which can be customised. Shoulder buttons are great for gaming because their positioning makes them ideal for any functions that call for lightning-quick reflexes and responsiveness, so players won’t have to get frustrated over misclicks or slow reactions.

Of course, both the Magic Press and pop-up triggers can be customised for functions outside of gaming as well so users can access features much faster. 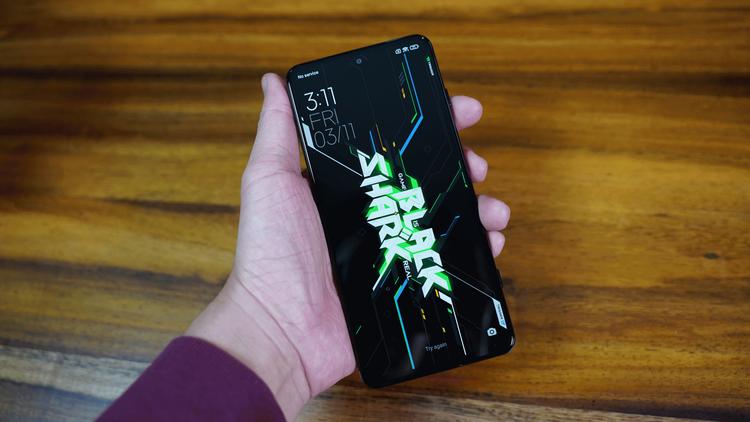 When it comes to gaming, visuals are just one part of the equation. For a more immersive experience, audio is also crucial. While it’s hard to beat a good headset, a solid audio system is a great alternative for mobile gamers who don’t want to lug around another audio device. The Black Shark 4 Pro features dual-symmetrical linear stereo speakers and a three-microphone array with noise cancellation so the audio sounds clear, and the user’s voice transmits clearly as well. This is important, especially in competitive multiplayer games where communication is key. DXOMARK, the independent benchmarking site for various devices, is ranked first in the smartphone audio rankings.

For mobile gaming, heat is an issue. After all, when gamers want to have marathon sessions of gorgeous games, it is inevitable that a smartphone will heat up, sometimes to rather uncomfortable temperatures. The Black Shark 4 Pro has a patented ‘sandwich’ liquid cooling system that leads to a 30% increase in heat dissipation and 18 degrees Celsius reduction in CPU temperature as compared to the Black Shark 3. This adds to the duration of each gaming session, and for those who prefer shorter ones, the overall experience is made more comfortable.

To complement the better heat management, the charging option for the Black Shark 4 Pro has been improved as well, with the introduction of the 120W hyper charge technology. The need to charge a smartphone for an hour or more can be a party pooper especially when one gets into the swing of things in-game. This 120W hyper charge capability can charge the 4,500mAh battery from zero to 50% in five minutes, and all the way to full in under 15 minutes. That is really fast.

Finally, true to the gaming device aesthetic, there is an RGB light (a triangle symbol of sorts) that users can turn on that’s placed right under the rear camera.

In theory, the Black Shark 4 Pro holds up remarkably well. We will be testing the device out for ourselves in practice to see if the gaming smartphone lives up to the hype.

Brandon shapeshifts between being a nerd and a geek like Mystique, but with fewer options. He reads an unhealthy amount of comics and manga, while playing a healthy amount of board games and video games.