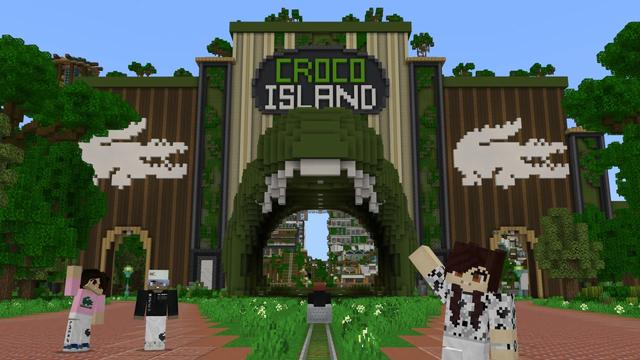 In the futuristic, smokey basement of ESpot – the Paris gaming haven situated opposite the Louvre – is an arena, where on Saturday four renowned young gamers sat in front of 400 video game fans invited from across the world. Like some kind of IRL Twitch, the fans eagerly watched their favourite gamers play a brand new universe within Minecraft, one created in collaboration with French label Lacoste, before unlocking it for the public to play too.

In this new Minecraft world, the classic Lacoste crocodile has been y2k-ified, becoming the blocky lo-fi host of Croco island – a fun, beachy paradise designed as a playground for gamers’ own self-discovery and growth as a community. Mini games including word puzzles, scavenger hunts, parkour and tennis (a nod to Lacoste’s own origins) are simple yet addictive ways to earn some digital coin on the virtual island, whilst a collection of clothing is available both as skins for characters, and in real life.

Unlike most gaming merch, though, this collection is far more stylish. Fitted crop tops, hoodies and cycling shorts with an arcade-style print along the hem; pastel hued polos and tees, sleek black backpacks and festival-ready body bags are just part of the 30-piece collection. Among the crowd at ESpot, these clothes offered a way for fans to showcase their love of gaming by way of their unique styles. A baby pink logo-imbued long-sleeve tee from the capsule was paired with Harry Styles-esque pearls by one gamer, while the white printed crop top became part of another’s Sailor Moon aesthetic.

Moments before the event began, we spoke to Gen Z gamer, video creator and popular Twitch streamer Scott Major about the crossover between the gaming and fashion communities, the freedom of dressing in the virtual world and the highlights of Croco Island.

Hey Scott, how has gaming and the act of play impacted your own self-discovery?I think for me, it's being able to express myself in a different way. Growing up in the west of Scotland, it was very ‘boys like football’. Being someone who didn't, finding gaming was a way to meet people that have the same interest as me and express myself creatively. Producing gaming YouTube videos and content has definitely helped me be a lot more confident too.

What games helped you with self-discovery when you were younger?I've always been a big gamer. When I was younger I’d play Age of Empires with my dad. That then pivoted to World of Warcraft and every online game under the sun from Toon Town to Club Penguin. I played everything. Minecraft was the first one I found where I felt like I could do whatever I want to. It’s such a freeing game because you’re not just following a story, you’re making one.

What are your favourite parts of Croco Island?I like all the different mini games. The parkour is challenging but not annoying or frustrating. The tennis also translates quite well and is a good way to bring in the world Lacoste came from. I was a bit sceptical about it at first – on paper I didn’t think it would work – but having actually played it now I think it works quite smoothly.

How do you think the game could help gamers with their self-expression?I think Minecraft and Lacoste have built a bridge between fashion and gaming in a way that’s easy to understand. It doesn’t feel forced and it’s part of this immersive world which is just quite fun to play in. 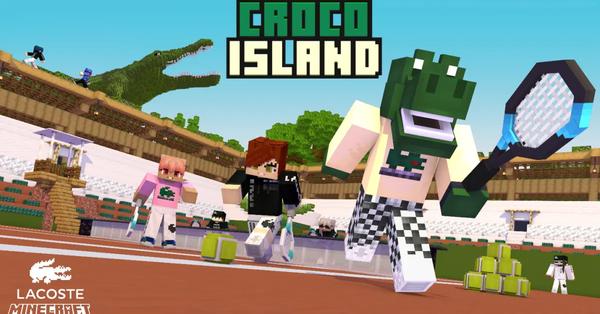 Do you see any similarities between the fashion community and the Minecraft community?Playing Java Minecraft, which is what I always have, you're able to express your identity through your skin. I’ve had several skins that represent me and my brand, and I enjoy changing it to express a character I’m playing. I think Minecraft is one of the better games for representing yourself and how you want to present.

If you were to create a skin with the new Lacoste x Minecraft collection, which pieces would you pick and why?The skin I have in the game is what I wore for the shoot. I like that because it was colourful without being too in your face. But I really like the black-and-white pieces and the layered effect would translate really well into a skin. I would go for the layered contrast long-sleeve print tee with the chequered Minecraft pants.

A lot of gaming fashion tends to just be a graphic tee with not a lot of thought put into it. It tends to be made for kids, whereas this is an older collection, which I like because as a young adult gamer, there’s not a lot of ways to express yourself through clothes. You’re able to mix and match a lot with these pieces as well. The fact that it’s this mix of streetwear and athleisure makes it incredibly comfy. Like, I’m wearing sweatpants but they look good!

I guess that's the interesting thing about digital fashion, it's not limited by seasons, weather or comfort. You can wear anything you want.I know people who have skins that are very out there. A lot of people use it to express themselves in ways that maybe they can't in real life. What you wear in Minecraft, no one bats an eye at… but if you wore that in public, people will be like “what?”.

When you make a skin, is it based on what you wear in reality or what you maybe want to wear IRL but don’t?Kind of both. In Minecraft, my character’s hair has always been blue. I’ve done it before IRL, but I wouldn’t do it again — it made it very hard to pick outfits.

You’re just about to go unlock the world for the public to play. How does it feel to game in an arena filled with your community?It feels weird, it hasn’t sunk in. I stream Minecraft and other games live to over 1000 people but I’m in my house with no one in front of me. Especially with the last two years and Covid, it’s gonna be weird to be in a room with lots of people again. I’m excited to share that space though, and show the collection to a bunch of people who understand the fashion side and the gaming side.

Do you think gaming and the metaverse have the power to unite people in real life?As someone who met most – if not all – of my friends through online gaming, I definitely agree. I think the online space has changed a lot and it's such an easy way to meet people of similar likeness and similar interests. But also a good way to meet people with completely opposite interests. It’s definitely made me more aware of different things in the real world in both expressive ways, and more serious topics you don’t necessarily understand if it’s not your experience. And imagine how much lonelier the last two years would have been if we hadn’t been able to do stuff online! Being able to spend time with friends and family or meet new people through online spheres is definitely the way forward.

Croco Island is available now to play for free for Minecraft users, while the Lacoste x Minecraft collection will be available online at Lacoste.com from 16 March 2022 and in Lacoste stores 23 March 2022.

All images courtesy of Lacoste.

how to shoot gaming videos with phone