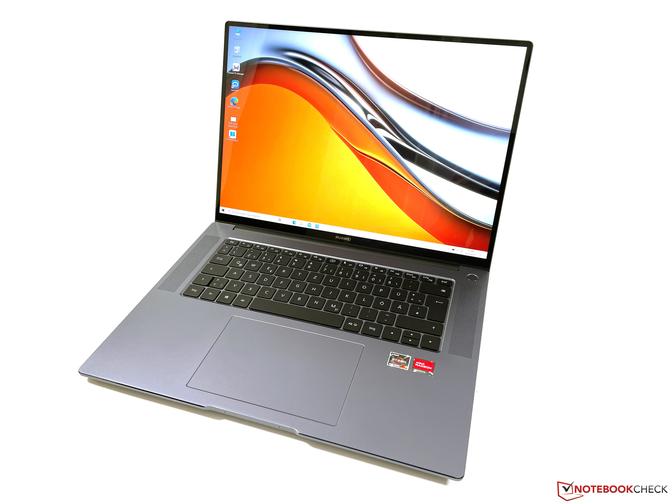 Huawei is going strong in the world of laptops, and the company just launched the very intriguing Matebook 16 with a 16" 3:2 screen, massive battery and super-fast charger. It is offered with two AMD APUs, and we got the mightier version with Ryzen 7 5800H.

The laptop ships with Windows 10 Home, but it's eligible for a Windows 11 update now that Microsoft has released the latest version of its OS.

As the namesuggests, the Matebook 16 comes with a 16" screen - it is an IPS LCD with an aspect ratio of 3:2. The resolution is 2,520 x 1,680 pixels and the laptop claims each display is factory calibrated to a dE<1. The 3:2 aspect ratio gives you a bigger canvas than most 16" laptops that employ 16:9 screens and makes the Matebook 16 much better suited to reading and browsing the web.

Productivity is the Matebook 16 forte, because while the Ryzen 7 5800H has a decent built-in Vega GPUit's not nearly as well suited for gaming as a laptop with a discrete GPU. The Matebook can take pretty much any work-related software thrown at it - it handles Photoshop wihtout breaking a sweat, renders short videos in Premiere, and runs any browser and video streaming virtually without any stutter.

Much like the previous generation the latest Ryzen 7 CPU is built on the 7 FinFET process by TSMC and comes with 8 cores and 16 threads. The base clock rate is 3.4GHz, while boosted it can go up to 4.6 GHz, and in raw benchmarks, it trades blows with the 11th-gen Intel i7-11370H and more often than not has it beat when limited to the lower power draws.

The thermal design power (TDP) of the Matebook is 45W, but Huawei introduced a Performance Mode (activated through pressing Fn+P keys) that brings the performance up to 54W. It is worth mentioning the laptop needs to be plugged in, and the battery must be above 20% - the software does not allow you to start it otherwise.

There are also two 8GB RAM chips, each working at 3200 MHz, while the storage is a 512GB SSD built by Samsung. Huawei does call its cooling “gaming-grade” dual fans and 2mm “extra-wide” dual heat pipes, and while they might be suitable for games, we didn't have the best experience with GTA V and Civilization V with even the High settings seemingly a tall order on the 2.5K panel.

In Geekbench the Ryzen 7 5800H loses to both of Intel's cores in single core and splits the difference in multi core - beating the quad-core 11370H and losing to the octa-core 11800H, which is only natural.

The Matebook 16 can benefit from extended integration with other devices in the Huawei ecosystem. The laptop comes with Huawei PC Manager pre-installed, which is one way to enjoy Huawei Share. The software essentially pairs a Matepad tablet to use a secondary screen - you can mirror the laptop, extend the display, or even transfer files through drag-n-drop gestures.

It works the other way as well - you can use the Huawei M Pencil on the Matepad and turn in into a graphics tablet or use it to operateany software, of course, with the apparent minuscule lag that comes due to the wireless connectivity.

Huawei Share works with eligible phones as well - owners can deal with their phones through the laptop - they can answer calls (particularly useful if you have some Freebuds prepared), share screens or drag-and-drop pictures and other files.

This all only officially supports devices officially on the HarmonyOS 2.0 and not necessarily all of them.

The Matebook 16 brings a massive 84Wh cell which promises up to 12.5 hours 1080p video playback from a single charge. We looped a Full HD video on VLC Player (with the Wi-Fi and Bluetooth turned off)and we got extremely close to the lab results - 12 hours on the dot.

Actual work with apps, with Wi-Fi turned on and casual music playing from Spotify got us 7 hours of endurance, which means the Matebook 16 will get you through most working days just fine.

When it comes to charging the Matebook 16 comes with a 135W monster brick charger that fills up the laptop through the USB-C port. A thirty minute charge brings you to 38% from a flat battery, and you get a full charge in about two hours even if the screen is on in that time.

Better yet, it's a Huawei SuperCharge adapter so it can also charge any Huawei smartphone and tablet at their max rate, saving you the need to bring a separate charger for those.

There are two USB-C ports on the left side and two full-sized USB 3.2 Gen1 on the right side. We also have a display port and 3.5 mm audio jack, but for those who prefer to deal with calls without headphones, two microphones are integrated in the slit used to open the laptop. Like any other Huawei laptop, the camera is hidden in the keyboard and only pops up when pressed. It's hardly the most convenient location for video calls as you get that dreaded up-the-nose angle, but some will appreciate the extra privacy stemming from the fact that it's not always open.

Despite its ample size the Matebook 16 doesn't have a numpad, Huawei opting to place front-facing stereo speakers around the keyboard. Multimedia fans will certainly appreciate those, but we can't help but feel a numpad would be more in line with the overall productivity focus of the Matebook 16.

On the upside you get a massive touchpad, way bigger than any other Huawei laptop out there. It allows for better swipes and has more room for control, and the clickable area grew too. Sensitivity is excellent too, so we had no issues with its performance.

The final noteworthy control is the fingerprint scanner, doubling as a power key, which supports caching so if you hold your finger for just a moment when powering on the laptop it will directly log you in when Windows boots. It's nothing new for Huawei Matebooks, but is still an excellent addition to an already stacked features list.

The Huawei Matebook 16 with Ryzen 7 5800H APU costs €1,199, while the Ryzen5 5600H version is €1,099. At those price they are a real steal if you are after a laptop with top-notch CPU performance, great battery life and a very good screen. The 3:2 aspect on the already ample 16" screen will really make a difference in a lot of productivity tasks and while the Huawei Share is not going to be a huge selling point it would certainly sweeten the deal for those with more than one Huawei device.

Of course, the lack of a dedicated GPU means this is no gaming laptop, but there's plenty of choice for those searching for one. And those looking for as much CPU power as possible in a greatly built laptop with a large display will certainly appreciate the unique proposition that is the Matebook 16.