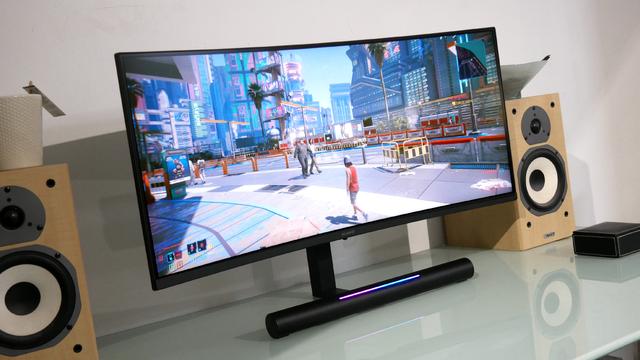 The Huawei MateView GT is only the third product to be released by Huawei’s monitor department. The others – the Huawei MateView and Huawei Display 23.8 – set a standard we’ve come to associate with the Chinese firm, particularly with products that exist outside of its storied smartphone line. Put simply, it’s a standard that promises spectacular bang for your buck.

The MateView GT is no exception. It’s among the cheapest ultrawide gaming monitors on the market, and yet it’s also stuffed with unusual extras, including a built-in soundbar and USB-C port. It isn’t the perfect monitor but, at this price, I wouldn’t expect it to be. What you’re getting instead is a great entry-level ultrawide gaming monitor that somehow manages to avoid making the usual slew of sacrifices to keep the price down.

For the money, you’re getting a 34in 3,440 x 1,440 VA panel with a maximum refresh rate of 165Hz and a gentle 1500R curve. Response time is quoted at 4ms G2G and the panel supports AMD FreeSync Premium adaptive sync technology to reduce screen tearing. The MateView GT is also rated for HDR10 decoding, although it has no official DisplayHDR rating beyond that.

On the rear beneath a detachable port cover you’ll find two HDMI 2.0 inputs and one DisplayPort 1.4 port, one 3.5mm audio jack, one multipurpose USB-C port (with video, data transfer and 10W fast charging support) and a USB-C port for the power supply. There’s no USB hub here.

The panel sits on a fairly basic stand with 110mm of height adjustment and 20 degrees of backwards tilt – bog-standard stuff for an ultrawide monitor. Less bog-standard is the soundbar mounted to the bottom of the stand, which houses two 5W drivers and an LED light that runs horizontally across the middle. You can VESA-mount the MateView GT, but in doing so you lose access to this unusual soundbar.

READ NEXT: The best monitors to buy

Setting the undeniably appealing price aside for a second, there’s plenty else to like about the MateView GT. It’s nice to look at, for one thing: the bezels are thin and the panel itself is remarkably slim for a 34-incher. The plastic construction doesn’t feel cheap and the matte black finish is suitably serious-looking.

The stand too is inconspicuous, although the effect is spoiled by the enormous soundbar attached to the bottom. The lack of pivot or swivel options might irritate some but these are rare sights on ultrawide monitors and I didn’t miss them – for your posture, height adjustment and tilt are to my mind the most important features anyway. 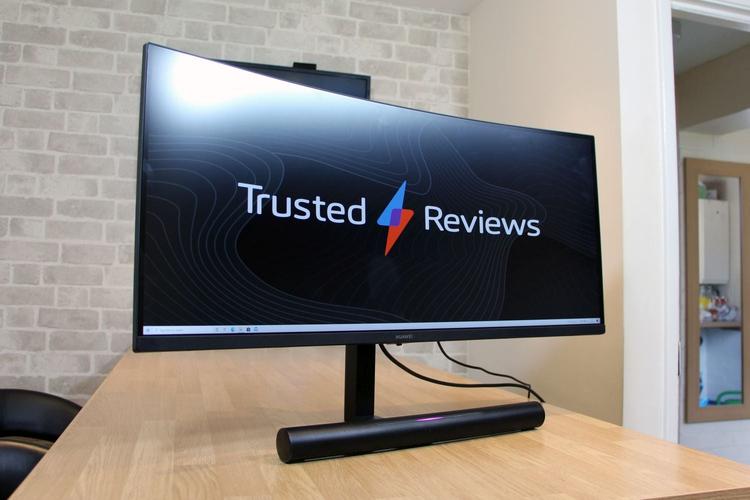 Then there’s the inclusion of USB-C, something gaming monitors usually neglect. It’s baffling to think that the £1,849 Samsung Odyssey Neo G9, a 49in behemoth of an ultrawide gaming monitor, lacks a USB-C port while the £500 MateView GT includes one. It might not seem like much, but that single port opens the MateView GT up to a new market of individuals who want an expansive and uncompromising monitor for both work and play.

The aspect ratio obviously helps here: 21:9 is big enough for two applications (in my case, Chrome and Slack) to run side by side comfortably, and although the curve is very gentle it’s enough to keep the extremities within your cone of vision. Of course, it also sucks you into the action ever so slightly when you’re playing a shooter or racing sim.

Speaking of gaming, the MateView GT’s credentials have no right to be this good. Admittedly, my PC didn’t always make the best use of the 165Hz, 3,440 x 1,440 panel, but it’s a winning combination nonetheless and, on the whole, my time spent gaming on the MateView GT was thoroughly enjoyable. The panel is responsive and fluid, particularly with maximum overdrive settings engaged. It isn’t perfect, as I’ll discuss later, but it’s an incredible specification for the price.

Our tests revealed that the MateView GT is no slouch in the colour accuracy department, either. Out of the box (in default “P3” mode) the panel produced 127% sRGB and 87% of the DCI-P3 colour gamut. The latter is a little low for a monitor with any kind of HDR aspirations but with average colour variance (Delta E) never exceeding 2, the MateView GT’s colour accuracy is pretty good.

Colour temperature was very nearly bang on 6500K in the default P3 mode (at a default brightness of around 205cd/m²), meaning whites lack an obvious red or blue tint. The VA panel technology produced a phenomenal peak contrast of around 4,500:1, while peak luminance topped out at 400cd/m² in default (SDR) mode. Panel uniformity is also strong.

To all intents and purposes, these are very good results indeed. Games look great on the MateView GT: the spectacular vistas and abundant neon shades of Star Wars Battlefront II are well represented and even positively ancient titles like my current sweetheart, The Elder Scrolls IV: Oblivion, benefit from the wide aspect ratio and vibrant colours.

READ NEXT: The best gaming mice to buy

With no local dimming to speak of, those impressive contrast and luminance figures don’t quite equate to strong HDR performance. In fact, contrast shrinks to around 4,000:1 in HDR mode, as the black level rises to 0.08cd/m² (versus 0.046 in SDR mode) and luminance tops out at around 370cd/m². Pair this with the slightly uninspiring DCI-P3 gamut reproduction and, ultimately, you have a monitor that is best left in SDR mode.

On the topic of panel performance, I should mention that the MateView GT can exhibit a bit of ghosting in fast-moving sequences, such as in a frantic firefight with multiple enemies. Engaging the maximum overdrive setting helps but that, in turn, produces a bit of inverse ghosting, so you’ll have to settle for one or the other.

I was also a little bit disappointed with the built-in soundbar. Yes, the audio is better than a pair of built-in speakers, with significant volume and a little bit of bass weight. I think I simply expected more from it or, rather, I think I expected it to feel like an adequate replacement for a cheap pair of PC speakers. Unfortunately, it did not.

Moreover, the lack of a USB hub is a bit of a sticking point. The MateView GT was so close to perfection on the connectivity front, too: USB-C is great, but when those competitors I keep scoffing at tend to offer at least two USB-A ports for peripherals, it loses a little bit of its lustre.

Tally it up and it’s clear the MateView GT is worthy of recommendation. Unimpressive (albeit unsurprising) HDR performance notwithstanding, this is undoubtedly the best budget ultrawide gaming monitor I’ve come across.

For similar money, you could have one of the countless 27in 1440p, 144Hz gaming monitors that flood the market each year or you could have this multi-purpose, 34in 165Hz ultrawide monitor with USB-C. Yes, its rivals might have marginally better panels, but the MateView GT’s own is far from lacklustre, and it compensates with superior size, resolution and refresh rate. Put simply, this monitor is outrageously good value.