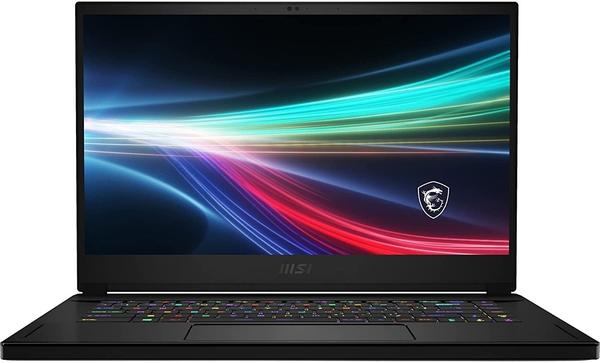 The thing that really stands out about the MSI Creator 15 is its beautiful OLED display. Indeed, when you use it, you’re going to fall in love with it, especially if you’ve never used an OLED display on a laptop before. It’s incredible, and if you’re editing photos or videos, that kind of color makes a difference.

The biggest thing that feels a bit strange is that it feels like a repurposed gaming laptop. It has that thick and squared-off design that’s common in gaming devices, and it has a loud fan. When I put it next to other creator-focused devices like Dell’s XPS 15 or HP’s Spectre x360 16, the MSI Creator 15 definitely stands out as something different.

Aside from the OLED display, the other thing that I absolutely love about this machine is the battery life. It has a 99.9WHr battery, which is literally as big as it gets. Speaking of other creator laptops, I’m pretty confident that this one gets the best battery life, so when I talk about that boxy design, it just might be worth it.

That model is actually the base model, which is pretty impressive. You can get it with up to RTX 3080 graphics and up to a 1TB SSD. This top-end model costs $2,349, and it’s up to you what kind of graphics and storage you need. Personally, I think an RTX 3060 is pretty solid for a creator laptop.

This laptop isn’t very configurable, and there are only three options. Luckily, the OLED display comes standard.

Design: It looks and feels a lot like a gaming PC

The MSI Creator 15 looks a lot like the company took a gaming laptop and swapped out a bunch of features to make it more appealing to creators. For example, there’s no RGB light bar in the front, there’s a 4K OLED screen instead of an FHD screen with a high refresh rate, it has an IR camera for Windows Hello, and the design is just more subtle. It comes in a color called Core Black, which you might know by its street name: black.

Obviously, it comes with the MDI logo stamped in the lid, and that’s subtle as well, as it’s only a darker shade of black instead of a more flamboyant chrome color.

But as you can see from the side view, it has that sort of boxy look. It’s not necessarily a bad thing. It’s just a design that I expect to see more often from gaming devices. It does have lots of ports, which are all on the left and right sides. This is different from MSI’s gaming laptops, which have ports in the rear.

And here’s what’s cool about the ports. All three of the USB Type-A ports are USB 3.2 Gen 2, meaning they get 10Gbps data transfer speeds. You’ll find two of those on the right side, along with a USB 3.2 Gen 2 Type-C port, a headphone jack, and an Ethernet port. That USB Type-C port also supports DisplayPort, so you can use it to connect another monitor.

On the left side, there’s an HDMI port that you can use to output to an 8K 60Hz or 4K 120Hz display, a USB 3.2 Gen 2 Type-A port, and a Thunderbolt 4 port. Obviously, the USB Type-C port on this side is a lot more versatile than the one on the other side, supporting 40Gbps data transfer speed, dual 4K displays, or even an external GPU thanks to Thunderbolt. As always, I’m not a fan of the user having to know the difference between two ports that look the same, but at least they’re labelled.

Display: MSI brings that sweet, sweet OLED with the Creator 15

The MSI Creator 15 comes with a 15.6-inch 3,840×2,160 OLED display, and it’s awesome. Seriously, it makes the laptop an absolute delight to use. When you use an OLED display, your PC goes from being a utility to something more personal.

If you’re not familiar with OLED displays, your phone probably has one if you use a premium device. Since parts of the screen actually get turned off, blacks are truly black, to the point where you wouldn’t be able to see where the screen ends and the bezels begin in a dark room. Colors rendered on top of that instead of a backlight are more vibrant.

With wider color gamuts, higher contrast ratios, and more, OLED displays are perfect for creative work like photo and video editing. MSI also has an app called True Color that lets you adjust for Adobe RGB, sRGB, and more.

Brightness maxed out at 411.9, and contrast maxed out at 28,020:1, although that contrast ratio is really just the largest that my SpyderX Pro is going to be able to read.

To be clear, none of these display tests are a surprise. This is what you get with a premium OLED display. The contrast ratios are essentially infinite, and it makes that much of a difference to the user experience.

Speaking of consumption, the dual 2W speakers sit in a soundbar above the keyboard. They don’t get incredibly loud, but they’re still fine for listening to music or streaming media. The quality is great though. Obviously, you’ll do fine with calls if you’re working from home too.

There’s one problem though, which is that it has a 720p webcam. The quality of the webcam actually seems pretty decent for what it is, but with Intel’s new Evo spec, you’re about to see a lot of new laptops with FHD webcams on the market. If you’re on a lot of video calls, it’s something to be aware of.

Speaking of calls though, there’s another app on here called MSI Center Pro. It has lots of productivity features like battery optimization, but it also has noise cancellation, which definitely helps in the work-from-home scenario.

Keyboard and touchpad: The keyboard is RGB, and the touchpad is a bit small

The most interesting thing about the keyboard is that the backlight is RGB. That’s a feature typically reserved for gaming laptops, so the colors are more subtle, like pastel colors. The only other time I’ve seen something like this was from Razer with the Razer Book 13. I don’t mind it; it’s just an interesting choice, and it seems to be what happens when a gaming laptop company makes something aimed at another market.

As for using the keyboard itself, I feel like the keys require just a little too much force. This feels like the kind of keyboard that’s great for gaming, but for typing, it’s going to take a little bit of getting used to. I spent a lot of time with the MSI Creator 15, and I definitely made more errors writing articles than I usually do. Like I said, you’ll just have to get used to it a bit.

I just have to say it, but the Precision touchpad should be taller. It’s nice and wide, which is great. Now, it just needs to be taller. There’s some real estate on the deck that could have been used, but the whole thing could have been done differently; in fact, I wouldn’t be surprised to see it done differently in future generations. A lot of OEMs are moving to 16:10 screens, which makes them taller, adding more room on the deck for a taller touchpad.

The thing is, the touchpad isn’t even particularly small. It’s just that with it going so wide, the Y dimension feels small. If you look at something like a Dell XPS 15 or a MacBook Pro, which compete directly with this laptop, you can see what companies are doing with larger touchpads. It’s not a big deal. It’s just something I’d like to see from a laptop like this.

I mentioned earlier that the model that MSI sent me is the base model, packing a Core i7-11800H, RTX 3060 graphics, 16GB RAM, and a 512GB SSD, but to be honest, I don’t think most people need more than that. This thing flies, and most of the time, I used it connected to dual 4K monitors.

The higher-end model is going to be better if you need more storage for sure, but it also comes with an RTX 3080, so you’ll get more graphics power. If you’re looking for a creator laptop that can double up as a gaming machine, that’s the one you want.

But for what I used it for, the performance was great. That includes batch exports in Adobe Lightroom Classic, editing images in Photoshop, and of course, my general work flow of writing articles, having over a dozen Chromium tabs open (Vivaldi specifically), and using other apps like Slack, Skype, and OneNote at the same time. I did a bit of gaming too, playing some Forza Horizon 5. It doesn’t go for Ultra or Extreme settings, which is fine, but the game plays nicely, and it looks beautiful on the OLED display.

For benchmarks, I used PCMark 10, 3DMark, Geekbench, Cinebench, and VRMark.

The MSI Creator 15 also has a big old battery at 99.9WHr, and that’s as big as it gets. Anything bigger than that wouldn’t meet certain regulatory restrictions, such as being allowed on planes. In my testing, it got between four and five hours of usage, which is really good for a machine like this. that’s about average for what I get in an ultrabook or a convertible, but this thing has a 45W CPU and RTX graphics. Five hours of battery life under real-world use is killer.

I didn’t use any particular setting this time. It’s not like a productivity machine where I can set the power slider to balanced all the time. There was a lot of photo editing happening, and sometimes, it was also powering a 15.6-inch FHD OLED display that was sent by INNOCN. I didn’t try to preserve power, or run a test by looping local video playback or something like that. This was straight-up real-world usage, and the results are really good.

Who should buy the MSI Creator 15?

There’s a lot about the MSI Creator 15 that’s really good, and there’s some that’s not that great, so obviously, it’s not for everyone.

Who should buy the MSI Creator 15:

Who shouldn’t buy the MSI Creator 15:

Other than the OLED display, which is absolutely stunning, one of the biggest things that stands out to me here is that boxy design. MSI’s laptops are traditionally made for gaming, and it feels like the firm took a gaming laptop design and swapped out a bunch of gamer-centric features for creator-centric ones. That’s not necessarily a bad thing; indeed, it might be quite the opposite, but it should give you an idea if this laptop is for you.

how to pair msi gaming app with phone