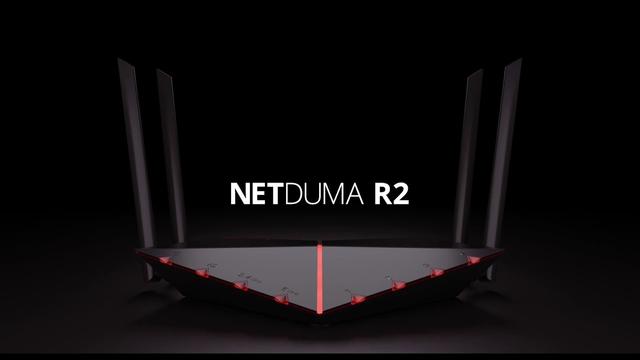 We review a Netduma R2, a router aimed at gamers, that was announced in July 2020. It has a dedicated router operating system developed by NetDuma called DumaOS – it was created from scratch with a completely redesigned interface and better QoS. It was first launched in 2017 for their R1 router. They partnered with Netgear to launch the Nighthawk XR500 Gaming Router armed with their OS a year later. Netduma R2 has a DumaOS 3.0 software on board, which includes such new features as:

The specs of the router don’t look so hugely impressive at first glance. The Netduma R2 router is powered by a Dual-Core processor (the frequency is not known) with 256 MB flash and 128 RAM. It’s only WiFi AC capable (it’s a pity it’s not an AX), one USB 3.0 port, and four Gigabit LAN ports. On 2.4 GHz, you can get up to 300 Mbps, and on 5 GHz, it’s up to 867 Mbps. With dual-band, it’s possible to reach 1200 Mbps. R2 is designed to ensure the best connection for your online gaming. It allows automation of network optimization, isolates servers that you want to play, one place to benchmark speed tests of their favorite game, and other more gaming capabilities.

Netduma R2 isn’t cheap as it’s 169.99 € (a discount from 195 €), and it’s expensive for this segment of 802.11ac capable hardware. You mainly pay for the software capability. Is it worth the price premium? Let’s have a peek at the product, and then let’s dive into the review.