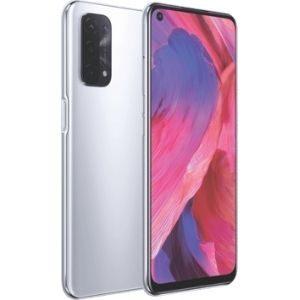 The Oppo A74 5G landed in Finder's test labs at the exact same time as the Oppo A54 5G, and they're remarkably similar handsets, sharing the same processor, camera and battery specifications.

However, while they're somewhat easy to mix up when you're testing both simultaneously, the Oppo A74 5G is clearly the favoured sibling, benefitting from a range of improvements that jump well beyond the moderate price premium it commands.

That makes it an interesting phone if you're after 5G at a budget price point. It's still well worth considering your options, as there are a lot of phones offering great high budget/low mid-range value right now to choose from.

The Oppo A74 5G retails in Australia in a choice of two rear colour hues. You can opt for "Space Silver" or "Fluid Black", colour names which made me wonder if Oppo was dropping back more into its older habit of aping iPhone colours and designs. Either way, it's a plastic body phone measuring in at 162.9x74.7x8.4mm with a carrying weight of 190g. That weight would be more if it were a glass or metal backed phone, but at this price point, plastic is pretty much all you're going to get.

At the front, Oppo equips the Oppo A74 5G with a 6.5-inch display with a 2400x1080 resolution and support for 90Hz refresh rates. You can drop it down to 60Hz if you want to save a little battery life, which could be a worthy compromise if you're going to be using 5G a lot. More on that later.

The Oppo A74 5G features a holepunch-style camera notch at the top left, above the left-hand-side volume buttons. On the right you'll find a combination power button and fingerprint sensor, which is a feature we've seen in a lot of phones of late. Thinner vertical sensors can often struggle with recognition, and while that was an issue for the cheaper Oppo A54 5G, I had fewer problems getting the Oppo A74 5G to recognise me.

While the Oppo A74 5G has other advantages over the ever-so-slightly-cheaper Oppo A54 5G, they both share the exact same camera architecture. At the front, that holepunch selfie camera houses a 16MP sensor, while at the rear you'll find four sensors, headlined by a 48MP f/1.7 sensor. It's joined by an 8MP 119-degree ultrawide sensor and 2MP macro sensor in shooting terms, plus a 2MP monochrome sensor that's purely there for contrast purposes. 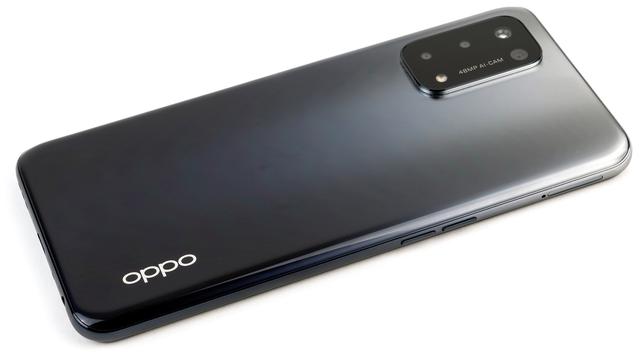 So very many budget and mid-range cameras have added a 2MP macro module to their camera arrays over the last year. I'm still waiting for one that delivers results that are particularly worth chasing, and the Oppo A74 5G hasn't changed that any. It's nice to be able to take very close up shots in theory, but when the practical results are ordinary at best if you're very lucky indeed, it's not exactly a selling point.

The same is broadly true of the ultrawide camera, which delivers a definitively softer and less appealing shot than the primary lens. You may well do better with a little judicious cropping or combining in software after the fact if you want particularly sharp images there.

This leaves the primary 48MP sensor to do the heavy lifting, and it's ultimately fine without being a particular standout at this price range. There's no optical zoom, and digital zoom tops out at 6x. As usual, you'd be better off getting a regular shot and cropping in most cases.

The Oppo A74 5G is one of the first phones we've tested to be running on Qualcomm's Snapdragon 480 SoC, paired up with 6GB of RAM and 128GB of storage. In essence, it's the supersized version of the Oppo A54 5G, which shares the same processor but with only 4GB of RAM and half the storage.

In the budget space, we often see Mediatek's processors given the nod for affordability, with fewer Qualcomm options on the table. The Snapdragon 480 is designed for affordable 5G phones, and at its price point the Oppo A74 5G definitely qualifies.

However, there's little doubt that the 5G capabilities of the Oppo A74 5G do contribute to the price, so it's important to see how well it actually handles itself as a smartphone. In software terms, the Oppo A74 5G is an Android 11 phone with Oppo's own somewhat overbearing ColorOS overlay on top, so it's at least relatively current, although future upgrades remain somewhat a mystery.

In benchmark terms, the Oppo A74 5G doesn't actually jump that much above its cheaper sibling, the Oppo A54 5G. Here's how they compare against a range of similarly priced handsets using Geekbench's CPU benchmark:

On the graphics front, the Oppo A74 5G features an Adreno 619 GPU. Here's how it compares against the same handsets using 3DMark's graphics benchmark:

However, because I was testing the Oppo A54 5G and Oppo A74 5G concurrently, I could get a more nuanced picture of their differences in real world app testing.

The inclusion of a 90Hz display makes a big difference when you're scrolling web pages, as you'd expect, but where the Oppo A74 5G really pulls ahead is in app memory management. That extra 2GB of RAM gives it a lot more breathing room when you're switching between apps or running games or other heavy duty applications. Where the Oppo A54 5G proved annoying due to lag, the Oppo A74 5G jumped ahead just a little.It is still worth keeping it in perspective, because the ColorOS overlay adds its own performance hit, and "cleaner" Android phones can run even more slickly, but there's just no question if you're in the Oppo camp that you should drop the pretty small extra asking price for the Oppo A74 5G over the Oppo A54 5G.

The inclusion of 5G is the other major selling point for the Oppo A74 5G, and while I did have to travel a little to hit a 5G zone, the trip didn't entirely feel worth it. Network conditions and performance can vary a fair amount, but I generally hit only around 300Mbps at best while testing the Oppo A74 5G. That might sound like a great number, but other 5G phones – including some mid-range models – have managed double that in the same locations. As we've said before, 5G alone isn't the reason to buy a phone.

One reason you might have avoided Oppo in the past is that many of its handsets lacked NFC capabilities for contactless payments. That's not an issue for the Oppo A74 5G, which has full NFC capabilities, so it's useful if your bank supports Google Pay or similar systems.

The Oppo A74 5G is powered by a sealed 5,000mAh battery. That's a specification that at one time might have seemed huge, but now is fast becoming an expected entity in the Android world. It's great to have a high number capacity, but only if it translates into good real-world performance.

The Oppo A74 5G sadly performed a little under expectations during the review period, although that may well be down to that 90Hz display. Battery usage can be wildly variable between users, so to give some common ground for comparison, we test by streaming a YouTube video for an hour at maximum brightness and moderate volume from a fully charged battery. The dividing line here tends to be at 90% remaining; score lower than that and you're looking at a phone that may struggle to make it through a single day's moderate usage.

Here the Oppo A74 5G only just manages to keep its head above water in comparative terms. Here's how it compares against similarly priced handsets:

While that figure was with the 90Hz display engaged, you could reasonably expect significantly worse battery life when 5G kicks in, because it's always a battery hog.

Oppo has a long history in providing just that little bit more when it comes time to recharge, and that's true for the Oppo A74 5G, which supports up to 18W wired charging. That's a big boost (again) over the A54 5G, which has to make do with more sedate 10W charging.

How we score our reviews

The price difference between the Oppo A74 5G and its cheaper sibling is just $50, but there's a pretty big gulf between them in terms of capabilities and features. If you were just comparing the two, you should definitely buy the Oppo A74 5G over its lower cost sibling.

However, this particular price bracket is one that's rife with competition and discounted models, and while it's an impressive take on what can be delivered in a sub-$500 5G handset, it's worth considering your wider options as well.