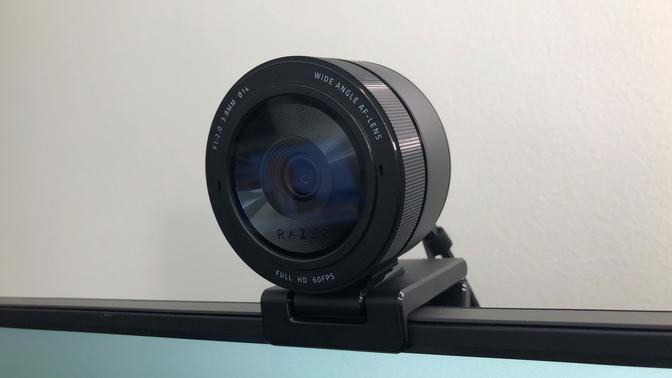 Most streamers will tell you one of the most painful things about streaming, next to setting up audio, is decent lighting. Not everyone has the room for mounting key lights from the ceiling or space on their desk for a giant ring light. The Razer Kiyo Pro is hopeful it may have an answer, however, as it aims for a killer picture regardless of how terribly lit your streaming cave is.

The original Kiyo was released back in 2017 and turned many heads at the time by having a small ring light built into the webcam itself. While that solution provides some relief for darkroom streamers, the camera's quality left much to be desired, so it was back to the drawing board.

The new Kiyo Pro improves on what came before with a slightly different approach to handling lighting in dark spaces. It ditches the ring light in favor of a sophisticated light sensor to tackle the gloom.

Honestly, getting rid of the ring light was a good move for Razer since it always seemed like a novelty feature on the old Kiyo. Even in darkly lit environments, that ring light never felt bright enough actually to improve your shot, and I often found that the ring light itself was more distracting than useful. Which was why it never quite made it to the top of the our best webcams roundup.

The Kiyo Pro's other improvements include HDR (off by default), 1080p resolution at 60fps, wide-angle lens, and omnidirectional microphone. It's a feature-packed webcam for streamers. 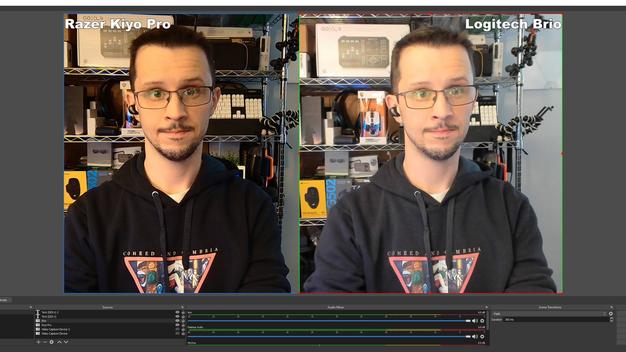 As you can see in the videos and pictures below, the light sensor helps significantly compared to the popular Logitech Stream Cam, its closest competitor specs-wise. During the day, you can see how the abundance of light coming from windows almost completely blows out half of my shot on the Stream Cam while the Kiyo Pro manages to adjust on the fly. Though admittedly, it's a little heavy on the contrast.

Night-time or darker rooms is where the Kiyo Pro truly shines (pun absolutely intended). You can see how the Pro compensates for low-light environments, and the Kiyo Pro might be the best low-light webcam I've used in years. It manages to illuminate me and my background enough to make the camera usable with even a little light.

The wide-angle lens allows for more of your background to show off, but if you look close enough at some of these shots, you can see an almost fish-eye lens effect to them, which I'm not too keen on. Thankfully, you can switch to a lower FOV which looks so much better.

The Kiyo Pro's autofocus seems to be one of the more annoying issues I have with the webcam. Too often, I found myself out of focus during meetings, calls, and even recording some test videos. So much to the point where I instead just switched to manual focus via the Synapse 3 software. The camera, for some reason, acts as if it loses me and doesn't quite know what to focus on. It's strange, and I hope it's a bug that's fixed in a future firmware update.

The default image settings on the Kiyo also leave much to be desired, especially if you're like me and work in an area that isn't exactly the best streaming environment. Everything was for a time too dark and had too much contrast.I've mentioned that you are able to customize the Kiyo Pro's camera settings through the Razer Synapse app, and with a couple of simple slider adjustments on brightness and contrast it's possible to vastly improve on the Kiyo's Pro's underwhelming default camera settings.

There are a handful of Cool to Warm presets, though nothing as robust as the Logitech Stream Cam's wacky filters. You might have a better time making your adjustments on third-party recording software like OBS or xSplit if you're looking to get fancy with your camera settings. As someone who has never been a huge fan of Razer's Synapse software, I was surprised to see how simple it was to tweak my shot.

For example, HDR is off by default and needs to be turned via the Synapse 3 app. And I would have loved to see a way to quickly switch FOVs, or go from auto to manual focus without diving into any software.

The Kiyo Pro also comes with an omnidirectional microphone. My microphone test script turned up some pretty crisp and clear audio, too, but picked up a ton of background noise like my desktop PC. If you're serious about streaming, you really should nab yourself a decent microphone to sound your best, and Razer itself makes one of the best cheap microphones right now.

The Kiyo Pro feels like a necessary maturation over the original Kiyo webcam, which often felt like a novelty in its design. I was glad to see the Kiyo Pro addresses a common problem with most webcams by dealing with unflattering lighting environments. Some folks might miss the ring light but I'm okay losing out for an overall bump in image quality.

At $200, however, the Kiyo Pro is one of the more expensive non-4K webcams you can find right now. With enough tweaking, you will be able to make the most of this webcam, but it's not naturally adept in every situation and the autofocus issue is a real pain. The right choice for anyone who wants the stream but who doesn't have the room or the luxury of setting up studio lighting for the best shot, perhaps, but not the ultimate webcam solution just yet.