Home gaming phone Surface Pro 8 vs Samsung Galaxy Tab S7+: Which tablet is right for you? 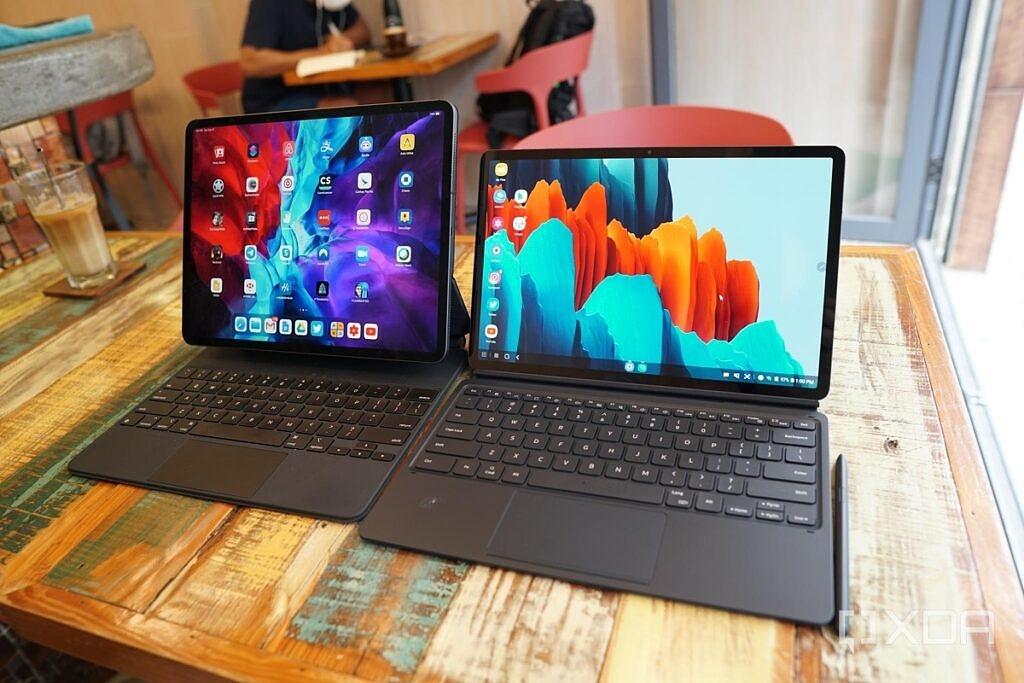 Surface Pro 8 vs Samsung Galaxy Tab S7+: Which tablet is right for you?

With the big redesign for the Surface Pro 8, it now looks and feels nearly identical to the Surface Pro X. The two tablets have the exact same width and length, which means it’s actually hard to tell the Surface Pro 8 apart from its older cousin. This is definitely a good thing as the Surface Pro was in dire need of a refresh in the design department. It’s also now made out of aluminum, quite the change from the traditional magnesium chassis. It still comes in Platinum and black though, and the black is known as Graphite.

The Surface Pro 8 isn’t heavy by any means — just under 2 lbs, at 1.96 lbs to be precise. To this end, you might prefer the Galaxy Tab S7+ if portability if your chief concern — it’s much lighter at only 1.27 lbs.

The Tab S7+ is substantially lighter, but if you use it primarily as a handheld device, you’ll feel the heft. At 285mm tall by 185mm wide, it’s not the most comfortable thing to use without a case. We definitely recommend buying the official Samsung keyboard cover if you opt for the Tab S7+. Samsung has made some tweaks to the software so the keyboard can be split or turned into a floating keyboard, but you’ll want a keyboard cover — it’s just too uncomfortable otherwise.

While most of the Galaxy Tab S7 Plus is stylish and sleek, the position of the S Pen on the rear is problematic and honestly, quite unsightly. Using relatively strong magnets, the S Pen automatically attaches to the back. Connecting to an extended magnetized area that blends into the camera housing, this is probably the best that Samsung could do, but it’s not the most stylish thing.

Microsoft wins in the ports department as the Surface Pro 8 features two Thunderbolt 4 ports as well as a 3.5mm headphone jack. Samsung continues to remove the headphone jack from their devices and the Tab S7+ is no exception. If you prefer to listen to music with wired headphones, or want to connect an external monitor with high resolution, the Surface Pro 8 will definitely be your best bet.

While both of these tablets have a pleasing design aesthetic, the Surface Pro 8 looks more modern with slimmer bezels. The camera housing also looks a bit more uniform on the Surface Pro 8 — a small detail, but definitely something you’ll notice in daily use.

Display is a strong category for both tablets. Samsung is well known for their amazing display quality and Microsoft really stepped things up with the Surface Pro 8. There’s no other way to put it – the Galaxy Tab S7 Plus is stunning, and the display is visually breathtaking. Apple likes to tout marketing terms like Retina Display, but the 12.4 inch Super AMOLED display on the Galaxy Tab S7 Plus is in a league of its own. At 1752 x 2800 pixels and a 16:10 aspect ratio, the display “only” offers 266 pixels per inch density, but much like megapixels aren’t the only deciding factor in cameras, the quality of the Galaxy Tab S7 Plus display is second to none when it comes to Android tablets. 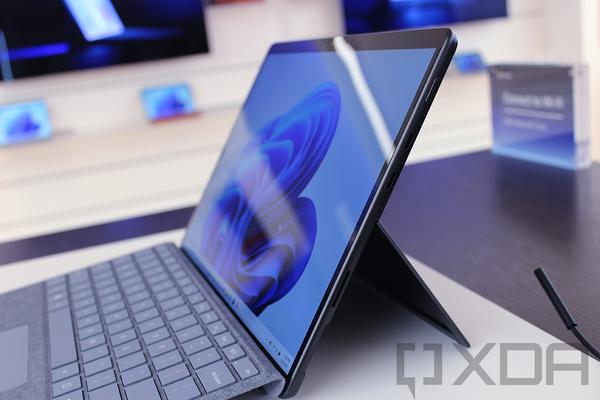 The display supports HDR 10+ and offers a 120HZ refresh rate, for super smooth scrolling. Samsung put an in-display fingerprint scanner on this tablet, although it can be a bit awkward to use due to the display size. Of course, you can also use Samsung’s bundled S-Pen for note-taking or drawing on the Tab S7+.

With the Surface Pro 8, Microsoft brought the same display size, resolution, and overall design to the numbered Pro family from the Surface Pro X, so the two devices stand toe-to-toe. Except the Surface Pro 8 also includes a 120Hz refresh rate, which makes everything from scrolling to inking feel much smoother. Plus, it supports Dolby Vision, so it’s clear the Surface Pro 8 now has the better display.

On top of that, if you use inking, the Surface Pro 8 has a new microprocessor that enables haptic feedback in the Surface Slim Pen 2, giving you the true feeling of pen on paper. Everything has just been made much better, and it’s one of the best writing experiences you’ll find on a tablet today.

Both tablets have amazing displays, but the Surface Pro 8 is likely the better bet for true productivity. The haptic feedback with the Slim Pen 2 offers an unparalleled experience for taking notes and drawing on a tablet. While the S-Pen is convenient and intuitive, it isn’t quite as good for professional use. If you’re just interested in consuming media, gaming, and light web browsing, you’ll definitely be happy with either display.

The Surface Pro 8 now comes with Intel’s Tiger Lake processors, and starts with an Intel Core i5. These processors significantly outperform what the Galaxy Tab S7+ and the Snapdragon 865+ offers at this point. In fact, the Snapdragon 865+ isn’t even the newest Qualcomm chip for Android tablets. The Tab S7+ is more than a year old and due for a refresh, so it’s definitely even further behind in performance.

The Surface Pro 8 also offers more options for RAM and storage, going up to 32GB and 1TB, respectively. Both of those are way more than what the Samsung Galaxy Tab S7+ can offer, but there’s a caveat as adding LTE to the Surface Pro 8 means you can only get 256GB of storage. Still, the TabS7+ only goes up to 256GB in any configuration, but there is an option to add expandable storage via microSD up to 1TB. You can also get 5G on the Galaxy Tab S7+, if that’s something you really care about.

The Surface Pro 8 promises up to 16 hours of typical usage, but as usual, that’s assuming minimal brightness and only the lightest of workloads. If you use the device on higher brightness or have a heavier workload, you can expect closer to 10-12 hours on average. The Tab S7+ is similar with an average battery life of about 12 hours according to most reviews.

The key thing to consider is you’ll likely use the Surface Pro 8 for more serious work, so it might also drain the battery a bit faster than watching Netflix or YouTube.

The cameras are another area where the Surface Pro 8 has caught up with the times. The rear camera has been upgraded to 10MP with 4K video, just like the Surface Pro X, whereas previous numbered models had an 8MP camera. On the front, both tablets still have a 5MP Full HD camera, but Microsoft says it has improved the low-light performance of the Surface Pro 8’s camera, so it may be better overall.

The dual camera on the Tab S7+ combines a primary 13MP wide-angle sensor with f/2.0 aperture, with a 5MP ultra-wide sensor with f/2.2 aperture. The camera is ok at first glance, but no one should buy a tablet for its camera — please don’t be that person. The front camera is definitely more important these days, especially for things like video calls, and the 8MP f/2.0 sensor will likely be ok, although it is limited to Full HD at 30 frames per second.

If you really must be the person using a giant tablet to take photos or videos, you’ll be happy to know the rear camera supports 4K video, also at 30 frames per second.

In terms of sound, the Surface Pro 8 features 2W stereo speakers, so on a hardware level, they should be pretty good. However, Microsoft touts Dolby Atmos support on the Surface Pro 8, so you may get a better surround sound experience compared to the Pro X, even though the two tablets have similar hardware and design.

The Tab S7+ also has an excellent audio experience. The quad speakers tuned by AKG are loud, clear, and immensely enjoyable. The speakers have the added benefit of louder notifications, but you’ll want to turn those down as they can be overpowering. If you’re buying the Galaxy Tab S7 Plus to enjoy media or listen to music, you won’t be disappointed.

Obviously, these are two completely different tablets with distinct target audiences. If you’re looking for the best media consumption tablet, it’s probably the Samsung Galaxy Tab S7+. It’s lighter, costs less, and has the added benefit of slightly better speakers. You can also enjoy all the games offered on the Google Play Store, so the Tab S7+ is very compelling as an entertainment tablet.

On the other hand, the Surface Pro 8 is a better all-round machine. If you need something to use as a media tablet and a true work PC, the Surface Pro 8 can handle everything you throw at it. In addition to impressive performance from the new Tiger Lake processors, you also get an amazing note taking experience with the new Slim Pen 2. Storage options are also more expansive so you can store everything you need for work and play.

how many megapixels is the razer gaming phone 2