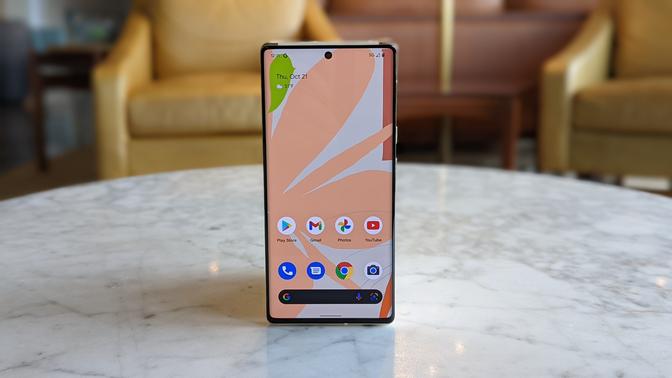 The Best Android Camera Phones of 2022

Update, 2/15/2022: We’ve reviewed our recommendations and have updated our best premium recommendation with the newly released Samsung Galaxy S22 Ultra.

What to Look For in an Android Camera Phone in 2022

If you’re looking for an Android smartphone with a great camera, there are a lot of factors to consider when making the purchase. Many companies try to distract customers with gimmicky features and specs that look good on paper, but they don’t tell the full story.

Take megapixels, for example. While they can increase the resolution of your photos, unless features like post-processing and color reproduction are good, you’ll wonder what went wrong with the unimpressive image or video you just captured.

Companies like Google have taken the software route with their cameras. The search giant’s smartphone line relies on advanced algorithms to produce flagship-quality photographs, and Pixel phones are well-known for their high-quality pictures.

On the other hand, the actual camera hardware is also important. You can have the best smartphone camera software on the market, but if the sensor isn’t capable enough, you’ll hit the ceiling in terms of versatility and quality sooner than you might expect.

Samsung’s a notable participant in the hardware field. Some of its most recent flagship phones have 108MP sensors and periscope telephoto lenses, adding a wide variety of shooting options to its camera app’s arsenal that competitors simply don’t have.

With so many different ways to implement a smartphone camera, it’s our job to break them all down and highlight the best ones. Below, we’ve listed a handful of phones that excel in their respective categories and offer the best balance of hardware and software.

If you want the absolute best camera you can find on an Android phone, you’d be hard-pressed to go wrong with the Pixel 6 Pro. Pixel cameras have always been great, and this new model has three of them on the back.

However, the thing that continues to set Pixel cameras apart from the crowd is all of Google’s special software features. Features like Portrait Mode, Night Mode, Magic Eraser, Face Unblur, and Motion Photos are amazing. You’re getting so much more than just megapixels here.

Speaking of megapixels, there are a lot of those, too. The main camera is 50MP, it’s joined by a 12MP ultra-wide camera and a 48MP telephoto camera with 4x optical zoom. That means you’ve got a camera for group shots and when you can’t get close enough to something. There’s a camera for every situation!

Aside from just the cameras, the Pixel 6 Pro has a gorgeous 6.7-inch display with 1440 x 3120 resolution and a 120Hz refresh rate. It’s rounded out with a 5,000mAh battery, Google’s own Tensor processor, and 12GB of storage. This is a powerhouse of a phone.

The Pixel 6 Pro costs $900 and it comes with three years of Android updates. That’s not as long as high-end Samsung phones, but you’re always going to get updates first. The software is the cleanest version of Android you can find.

With three cameras and a giant screen, you have all the tools to capture amazing photos, no matter the situation.

What if you could get the same cameras as the Pixel 5 for as much as $350 less? That’s exactly what you can get with the Pixel 5a.

The Pixel 5a has the same main 12.2MP camera along with the same 16MP wide-angle camera as the Pixel 5. The 8MP front-facing camera is the same as well. Of course, you’re getting all the same camera software goodies too.

So what’s responsible for the cheaper price? A couple of things. The Pixel 5a’s 6.34-inch display has a refresh rate of 60Hz vs the Pixel 5’s 90Hz. The 5a has 6GB of RAM, whereas the 5 has 8GB. However, they both have the Snapdragon 765G processor.

All in all, it’s a pretty sweet deal if the Pixel 5 is a little pricey for you. You miss out on little things like wireless charging, but camera performance is going to be spot on. And it only costs you around $350.

Google’s new budget flagship has the same cameras as the Pixel 5, but packed into a budget frame so you can save about $350.

If you want a phone with everything you could possibly want from cameras, look no further than the Samsung Galaxy S22 Ultra. It has five total cameras—four of them on the back—including a 108MP main camera. 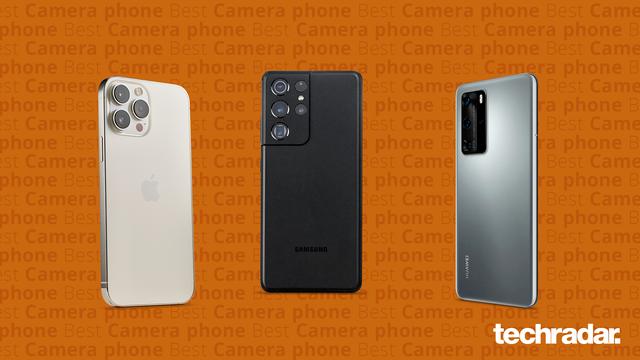 Joining that massive 108MP main camera is a 12MP ultrawide, 10MP 3x telephoto, and 10MP 10x telephoto. The front camera is 40MP. Samsung has set you up to be able to snap nearly any photo. Ultrawide for stepping back to get a lot in the frame, and telephoto lenses to see far-away things.

There are two telephoto lenses so you don’t lose quality when zooming in. You can zoom in 3x or 10x without needing to use digital zoom, which is essentially just cropping a photo. In addition, a new feature with the S22 Ultra is Super Clear Glass lenses to help reduce glare and lens flare.

If you want great cameras, great performance, and money is no object, the S22 Ultra is the phone for you. This high-end flagship has five powerful cameras to take the best shots.

When it comes to picking a phone that performs best at night, we have to give it to the latest Pixel phone. We’ve already highlighted the Pixel 6 Pro, so we’ll show some love to the smaller Google Pixel 6. It’s all about that Night Sight magic.

Google’s Night Sight feature on the latest Pixel line is perhaps the most impressive setting to ever ship on a smartphone. Once you enable it and stand still for a moment, you can capture some truly breathtaking images at night of practically anything. The system relies on a long exposure and lots of post-processing magic to yank out shots you’d never expect to come from a smartphone.

The company also has a feature coupled with Night Sight called Astrophotography. This feature specifically looks for a starry sky to highlight the miniature lights above and create photos that leave you speechless. Other phones aren’t capable of this kind of photography, since they lack this software feature.

The Pixel 6 doesn’t have as many cameras as the bigger Pixel 6 Pro, but it still has the 50MP main camera and a 12MP ultra-wide camera—you only miss out on the telephoto lens. Plus, it’s a whopping $300 cheaper than the Pro at $600 MSRP, so it’s a fair trade-off.

At the end of the day, Google’s Night Sight and Astrophotography are why the Pixel 5 should be the phone you think of if you’ll be taking lots of photos at nighttime. It’s simply that good.

Pixel phones are the best when it comes to low-light and the Pixel 6 does the job at an affordable price point.

This one’s an odd one for sure, but if you’re looking to take the very best-looking selfies, you have to check out the Asus Zenfone 8 Flip.

The reason this device is on our list is due to the hardware that gives it its name—the rear camera set physically flips 180 degrees so it faces you when you want to take a selfie. That means you can use the main 64MP sensor, the 112-degree 12MP ultra-wide lens, and the 8MP telephoto camera to capture some great selfies. You’ll also get much higher quality images since the sensors are intended for primary photography, not just the occasional selfie for Instagram or Snapchat.

Plus, your selfie video will be much better. Asus equipped the cameras with 8K video capture at 30 frames per second, plus advanced stabilization, so your vlogs will be extra sharp.

Asus also includes flagship-level specs in the Zenfone 8 Flip so you don’t have to sacrifice performance. There’s a Snapdragon 888, 8GB of RAM, 128 or 256GB of UFS 3.1 storage, and a 5,000mAh battery. You also get a 6.67-inch Super AMOLED 90Hz display, stereo speakers, fast charging, and an in-display fingerprint reader.

Downsides to the Zenfone 8 Flip include a lack of wireless charging and CDMA carrier support, meaning those on Verizon won’t be able to use the device. Software support is also historically spotty from Asus, so you might be stuck on Android 11 for a while.

Beyond that, if all you want is the best Android device for taking selfies, you shouldn’t skip the Flip.

Don’t you wish you could use your phone’s back cameras for selfies? The Asus Zenfone 8 Flip allows you to do just that, and you get great selfies as a result.

Those who are serious about capturing video on their phones will love the Sony Xperia 1 III. It’s one of the most premium phones you can get with a list of impressive specs like a 4K OLED screen, Snapdragon 888, 12GB of RAM, and loud stereo speakers. However, it’s the camera department that really stands out thanks to the added capabilities of Sony’s software.

Included on the Xperia 1 III is a wave of professional controls that let you adjust virtually every aspect of the video you want to capture. From ISO to white balance to color grading, you’ll find all the controls a pro could ever want to create the memories and achieve the production level you want. You also get Sony’s Cinema Pro camera app for even deeper control over your video, along with advanced audio controls to nail the sound capture perfectly.

On top of all this, the Xperia 1 III comes with a standard 12MP f/1.7 lens, an ultra-wide 12MP f/2.2 lens, and a periscope-style 12MP f/2.3 telephoto. This hardware, combined with Sony’s innovative camera controls, means you can create some really stunning videos. You can capture everything in up to 4K at 120 frames per second, as well as in a cinematic 21:9 aspect ratio.

The biggest downside to the Xperia 1 III is its lack of consumer-friendly features. There are many controls and features here that will appeal to a more experienced market, not those who just want to point and shoot video. Don’t expect the auto-mode for videos to impress you or a simple snap of the shutter button to capture your next masterpiece without any editing.

Priced at $1,299, the Xperia 1 III is by no means cheap, but if you’re serious about capturing video with your phone, Sony’s latest offering is certainly worth consideration.

Sony's flagship phone is has the hardware and software to make some truly breathtaking video. There's a bit of a learning curve to it all, though!