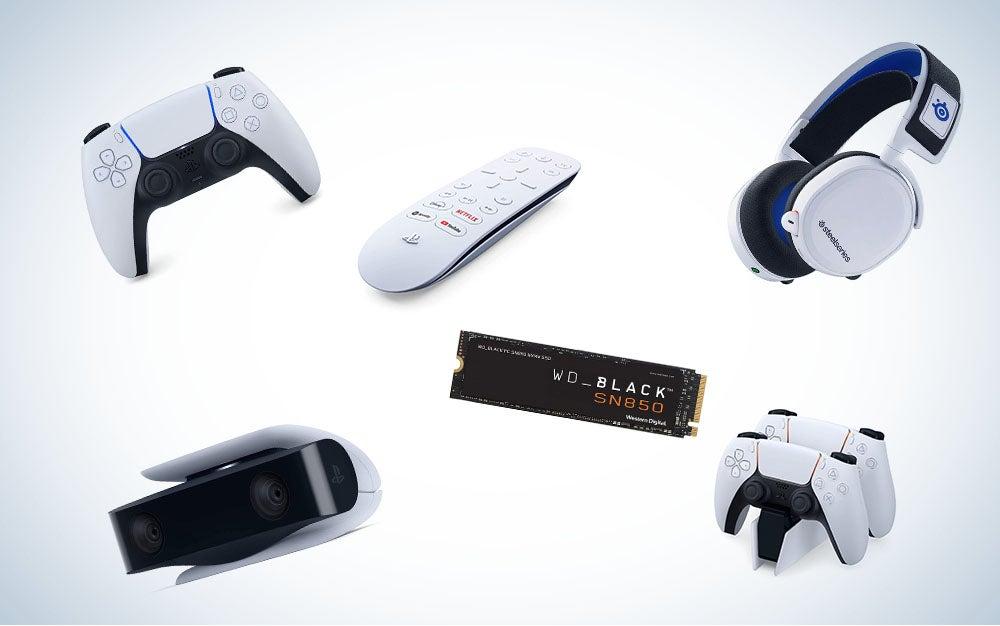 Despite being not much shy of a year and a half into its lifespan, it’s still proving maddeningly difficult to actually get hold of a PlayStation 5.

But let’s say you’re one of the lucky ones. The gargantuan PS5 is hogging most of the shelf you’ve allocated as its new home and you’re probably feeling pretty happy with yourself. We’d understand if you want to dive straight into some games, but remember that no console is complete without accessories, and the PS5 has plenty of those competing for your cash.

From headsets and controllers, to webcams and additional storage (which you *will* need), read on for our guide to the best PS5 accessories.

Our guide to the best PlayStation 5 accessories to buy today

The PS5’s DualSense controller is arguably as exciting as the console itself. In terms of design it’s probably the biggest change to Sony’s famous PlayStation pad since the Boomerang that never was, adopting the same white-on-black paint job as the PS5 it wirelessly pairs with.

But it’s what’s inside the DualSense that makes it really interesting. Haptic feedback replaces traditional rumble, allowing game developers to implement dynamic vibrations that immerse you more in their games. These can be as subtle as the pattering of raindrops, or as violent as the recoil of a shotgun.

Then you’ve got the adaptive triggers, which can apply varying levels of force or tension depending on what’s happening in the game. Throw in a speaker much like the one found (but sadly underused) in the DualShock 4, motion controls and a touch bar, and you’ve got the most high-tech pad out there. You get one DualSense included when you buy a PS5, but if you’re looking to play any local multiplayer then you’ll want to pick up another.

The downside of having such a pad as fancy as the DualSense is that all that clever tech doesn’t half guzzle down juice. It’s a good idea, then, to get yourself a charging station so the controller has somewhere to live that’ll keep it charged up.

The official PlayStation charging station is hard to find for less than £25, but you can save yourself a tenner by instead opting for Venom’s. It can charge two DualSense pads simultaneously and features an LED panel on the front which illuminates red when charging and turns blue when the pads hit full power.

Fancy yourself as the next big streamer? Well, you won’t get very far without a camera. Sony’s first-party offering features two wide-angle lenses for 1080p capture, while the adjustable stand allows you to position it above or below your TV.

As you’d expect, it communicates seamlessly with the PS5 hardware and DualSense, so with the tap of a button you can start recording your best Gran Turismo 7 laps.

In first-party games where it’s really taken advantage of, such as Returnal and Ratchet and Clank: A Rift Apart, the PS5’s Tempest 3D Audio tech can be really impressive. Technically, near any old pair of stereo headphones are capable of outputting the surround sound audio, but if you want to listen wirelessly then you can’t go wrong with Sony’s own Pulse 3D Wireless Headset. It’s fine-tuned to get the most out of the technology and for our money looks pretty great in both the standard white colourway or the newer midnight black variant. It’s comfortable too, but can start to clamp just a little bit after a few hours.

The headset comes with a wireless adapter that you plug into your PS5’s USB port, but if it dies during a game you can always temporarily go wired thanks to the 3.5mm jack. If you didn’t get one of these in your PS5 bundle, it’s really worth picking up.

Bang & Olufsen’s first Beoplay Portal gaming headphones were a big hit with us, but they weren’t much use to PS5 owners, with the Danish brand instead pursuing Xbox compatibility for its debut product in the space.

The second generation of Portal, then, is for everyone else. Design-wise, the headphones are identical to the original model, which is to say they looking nothing like what you’ve come to expect from gaming headsets and instead feel luxurious to pick up and use.

You can connect the Portal to your PS5 using an included USB-C dongle, and once paired with your phone you’ll be able to listen to audio from both sources simultaneously, something the Pulse 3D can’t offer, nor the original Portal cans for that matter. They’re not cheap, but if you want a superb pair of noise-cancelling headphones that also double up as a gaming headset, the Beoplay Portal is hard to beat.

Given how massive modern game file sizes are, it won’t take you long at all to fill up the PS5’s 825GB of built-in storage. But last year Sony unlocked the ability to expand your SSD so you can download more games and continue to enjoy the console’s next-gen benefits, such as faster loading times.

There are loads of good options, but we’d go for Western Digital’s WD BLACK SN850. To use it you’ll need to open up your PS5 and manually insert it in the machine, but Sony offers a handy guide on how to do this, and it won’t take you longer than half an hour. Make sure you have a screwdriver handy before you start tearing the thing apart, though.

And it’s well worth the effort. The WD-BLACK SN850 can hit read/write speeds of 7000/5300 MB/s and is available with or without heatsink. Storage starts at 500GB and tops out at 2TB. We’d recommend buying as big as you can afford as you’ll be grateful for it in the long run, but any extra space you can will help when building your PS5 library.

If you’re happy to pay bit more than Sony is asking for with the Pulse 3D Wireless, the SteelSeries Arctis 7P+ is one of the very best gaming headsets you can buy. Its USB-C dongle facilitates a low latency 2.4GHz wireless connection to your PS5, and it’ll work just fine with your Nintendo Switch, PS4, PC, phone or tablet to boot.

The 7P+ wireless sounds fantastic, it’s very comfortable, and the upgraded + model featured here has 30-hour battery life, up from 24 on its predecessor. The Discord-certified ClearCast noise-cancelling microphone is also great for chatting (or gloating) to pals while you’re playing online.

While you can’t play PS5 games directly from an external hard drive, you can move them to one to give yourself some extra space, which is much quicker than having to reinstall a game every time you want to play it again. An external SSD is also a great idea if you’ve got a PS4 library that you enjoy dipping back into on your PS5 every now and again.

We really like Samsung’s T5. It doesn’t really matter that it looks quite attractive, but it certainly doesn’t hurt it, and with transfer speeds up to 540MB/s (up to 4.9x faster than an external HDD, says Samsung), it’s as fast as it is slick.

what phone is the best for gaming