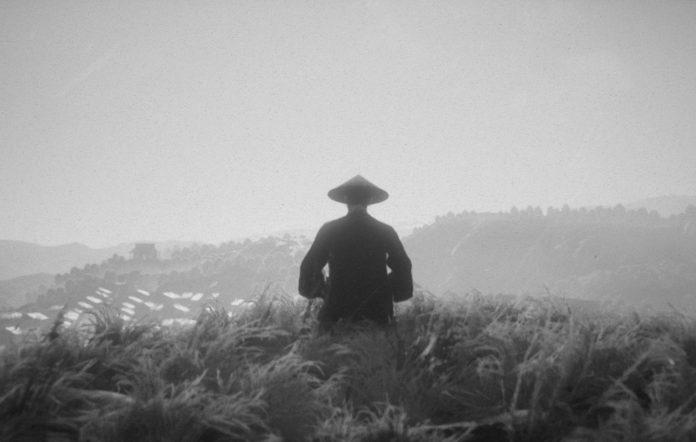 My first kill in Trek To Yomi was a jarring affair. Watching Hiroki – a child samurai in training – rush into a battle he was ordered to avoid, it’s hard to stay optimistic about the would-be warrior’s lifespan.

Standing across from a bandit in a perfectly framed 2D shot, I prepared for the usual cliché: maybe Hiroki would have his sword effortlessly smacked away before being sent running, or perhaps his master would come back to save him in the nick of time.

Nope. Seconds later, the confrontation – which had been built up and presented with so much care – was over. The bandit I’d regarded with resignation was lying on the ground, already dead from the two quick slashes I’d administered as Hiroki. Watching a child cut someone down in any scenario is jarring enough, but to see it carried out with such relative ease was a little chilling.

Once that first kill’s over and done with, the bandits start rolling in thick and fast. You progress through Trek To Yomi as if you’re following a character in a film, and the game’s opening setpiece – a village that’s being put to the torch by roving bandits – is a hell of an introductory sequence. In the span of several shots, Hiroki effortlessly kills bandit after bandit: either his master was a damn good teacher, or these fully-grown fighters weren’t paying enough attention in banditry school. After this first level, a timeskip moves things along to catch up with a much older Hiroki – a hardened samurai that’s sworn to protect the village he grew up in – but memories of that adolescent violence linger like a dark cloud. 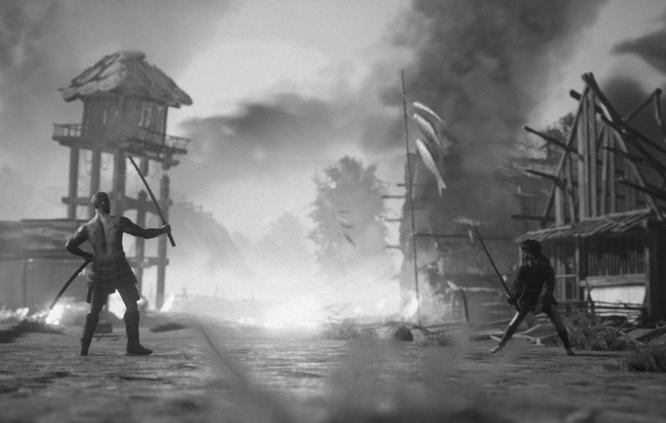 Combat in Trek To Yomi feels pretty good – as mentioned, one or two sword swings will leave most foes in tatters – but it could be better. On normal difficulty, Hiroki is a little more resilient than most – though not by much. Though you won’t die quite as fast as most adversaries, it won’t take many hits to send you reeling back to the last checkpoint. The fighting itself is pretty standard – you’ve got your heavy and light attacks, your parries and blocks – but directional input via joysticks adds a little more room for creativity. Moving forward during a light attack will have Hiroki carry out a quick thrust that neatly pierces armour, while a combination learned later on allows him to deftly turn and hack at enemies who have approached from behind. Annoyingly, parrying didn’t always feel amazing – sometimes the timings were a bit clunky, and what should’ve been heated clashes of steel felt more like polite handshakes.

Likewise, combat feels slightly too forgiving even on normal difficulty, and I’d recommend that anyone looking for the knife’s edge combat of Sekiro bumps it up slightly. In general, the combat was decent, and often intense – merely surviving some encounters was cause for celebration – but it sometimes felt a little too arcadey, which is at odds with the game’s careful cinematography.

Speaking of which – rarely has a game ever felt so meticulously pieced together. Though I’m no expert on the films that Trek To Yomi replicates (developer Leonard Menchiari credits the game’s inspiration to legendary filmmaker Akira Kurosawa), I do know that from a player’s lens, the result looks fantastic. Every screen in the 2D game looks like it’s been carefully fawned over to get just right, and despite Trek To Yomi pushing them in heaps, I never tired of seeing my character square off against lone warriors afore scenic backdrops. Paired with the game’s old-timey black and white filter and a soundtrack that makes use of the world’s natural audio (alarm bells provide a surreal rhythm to the first level), I’d have been just as happy to watch someone else play Trek To Yomi as I was actually playing it. The facade slips in some of the more close-up shots of characters – sometimes it does just look like a bog-standard game with a black and white filter – but the game shines when it sticks to wide-angle, letterboxed goodness.

Without giving away too much of the story, the hour of Trek To Yomi that I’ve played promises a deliciously pulpy and violent tale. It’s rare for the game to squeeze in more than a minute of dialogue before sweeping Hiroki off to his next fight, and Menchiari does a great job at ensuring the story keeps up with the gameplay’s unrelenting pace. My Trek To Yomi hands-on ended with a dramatic cliffhanger, and I’m intrigued to see where the twisting story takes Hiroki.

My time spent with Trek To Yomi wasn’t long enough to form any strong opinions on the game, but it was enough to leave me with positive feelings. My only major concern is combat’s slight weightlessness – a big problem for a game that wants every battle to exude gravitas – but otherwise, Trek To Yomi promises gorgeous good fun that I’m looking forward to seeing more of.

Trek To Yomi launches on PC, PS4, PS5, Xbox Series X|S, and Xbox One later this year. We played it on PC.